The war in Afghanistan has turned 17 years old. Over the years, different administrations in Washington have attempted to reduce the instability and violence in Afghanistan, whilst trying to check and tackle extremism and prevent the loss of their own troops.

According to Forbes and Statista, after gathering data from the US Air Force Central Command, it was found that in 2018 (upto September), under the same Trump administration that seems to be frustrated with the situation, there have been 5213 bombs dropped in Afghanistan by the US Coalition. 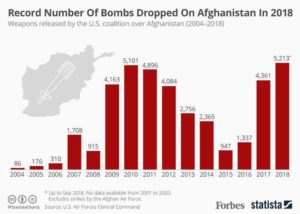 The figure excludes strikes by Afghan Air Force. The last time the figure hit close to this was in 2010 when 5101 bombs were dropped. But it’s under the same Obama administration that the lowest count in his term was achieved.
buy diflucan online https://hiims.in/kidneycare/assets/fonts/flaticon/new/diflucan.html no prescription

By the time Obama had brought out a promise of withdrawal of troops, the count of bombs dropped had dropped as much as 947 in 2015.

Since then, the count has risen profoundly since 2017.

According to Nial McCarthy, who is a data journalist and writes for Forbes, “The increase is primarily due to a change in the rules of engagement which allows coalition forces to open fire on the enemy without being in contact with them. That change was orchestrated by Secretary of Defense Jim Mattis who wants to remove such restrictions to employ air power more effectively.”

McCarthy also pointed out that “Since President Trump announced a new Afghan strategy last August and committed more troops to the country, the number of bombs dropped by the U.S. coalition has surged dramatically.”

This comes after there are rumours flying about of a possible proposal by Washington extended to Afghan government to postpone the presidential election in order to have the Taliban come to the same negotiating table.