With over 5,900 Afghan civilians killed and injured in the conflict, the intra-Afghan peace talks have failed to reduce the violence in the country, according to a new report released by the UN Assistance Mission in Afghanistan (UNAMA) on Tuesday.

“High levels of violence continue with a devastating impact on civilians, with Afghanistan remaining among the deadliest places in the world to be a civilian,” UNAMA noted in their report.

While the number of civilian casualties documented is the lowest in the first nine months of any year since 2012, down by 30% compared to 2019, the harm done to civilians remains “inordinate and shocking.”

The mission noted that since Sep. 12, the start of the peace negotiations in Doha, there was “no reduction in the documented number of civilian casualties” caused by parties involved in the talks in comparison to previous weeks.

“The peace talks will need some time to help deliver peace. But all parties can immediately prioritize discussions and take urgent, and frankly overdue, additional steps to stem the terrible harm to civilians,” said Deborah Lyons, the Secretary-General’s Special Representative for Afghanistan and head of UNAMA.

“New thinking and concrete action towards safeguarding civilian life will not only save thousands of families from suffering and grief but it can also help lessen recriminations and, instead, bolster confidence and trust among negotiators.”

UNAMA documented that Anti-Government Elements (AGEs), like the Taliban, Islamic State in Khorasan Province (IS-K, Daesh), and a few undetermined groups, remain responsible for the majority of civilian casualties (58%). 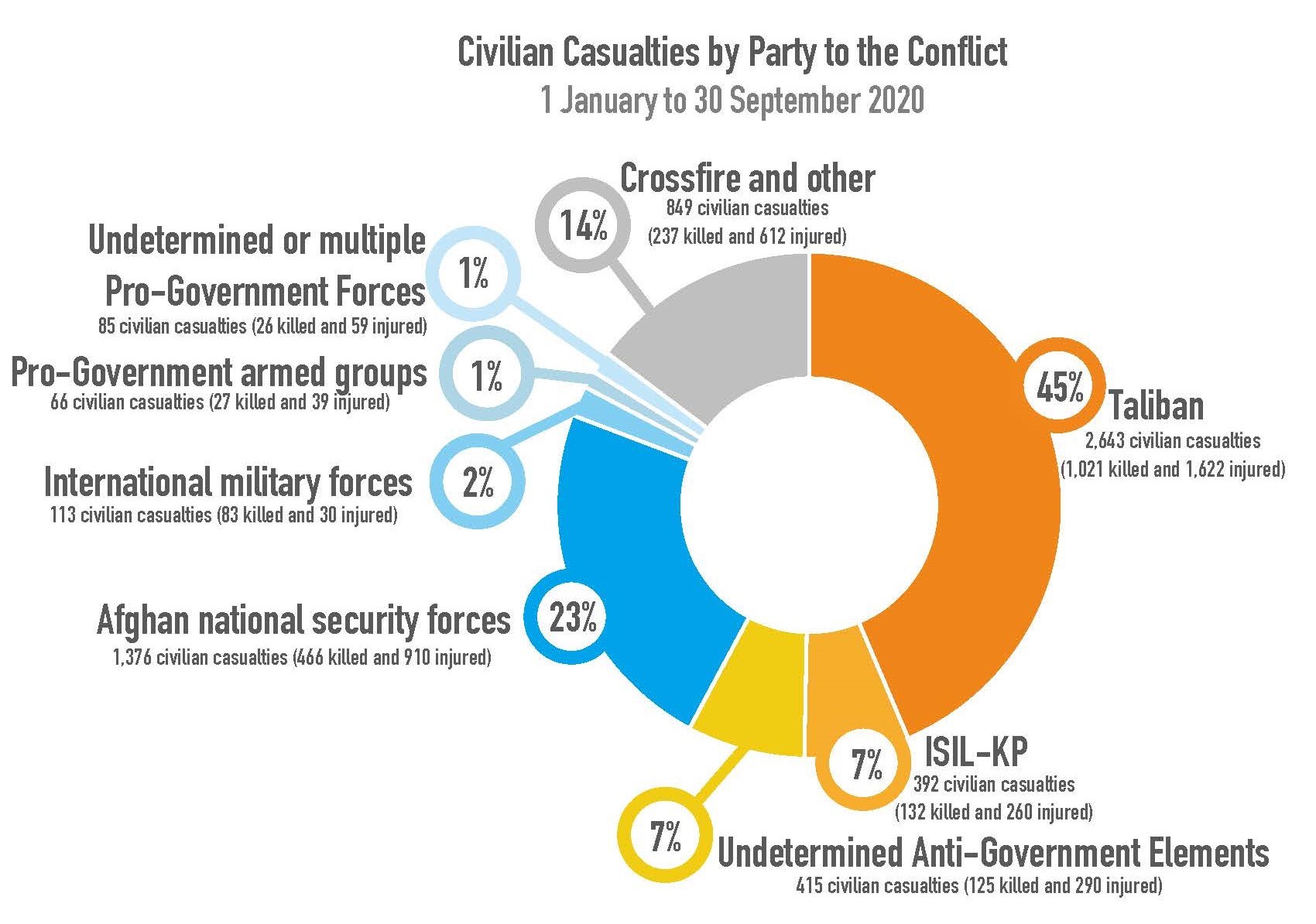 Attacks carried out by undetermined AGE increased with more incidents, especially in relation to the use of IEDs and targeted killings, in which UNAMA could not determine which group was responsible. This also corresponds with a decrease in the number of incidents for which the Taliban or IS-K claimed responsibility.

Pressure-plate IEDs, used by the Taliban, have an indiscriminate effect and are, therefore, “illegal at all times” UNAMA emphasised. Children made up 31% and women 12% of civilians killed and injured by PPIEDs.

“UNAMA urges the Taliban to meet its commitments and cease using these illegal weapons that wreak such harm on Afghan civilians,” the report said.

The UN also said they were concerned about targeted attacks on civilians, including education, health and humanitarian workers, members of the judiciary, tribal elders, religious leaders and civilian government employees.

The report finds that in the period under review there were fewer civilian casualties attributed to the IS-K due to a decrease in the number of attacks.

Ground engagements, mainly between the Taliban and the Afghan national security forces, caused the most civilian casualties, responsible for more than one third of all civilian casualties. This was followed by suicide and non-suicide IEDs (29%), targeted killings (16%) and airstrikes (8%). 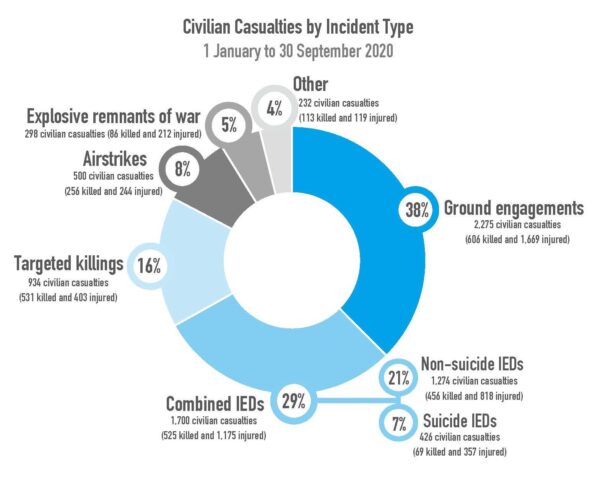 Pro-Government Forces (PGFs) were responsible for more than a quarter of all civilian casualties – 28% even after a 34% decrease compared to the same period in 2019. The drop is due mainly to the steep drop in international military forces (IMF) airstrikes since March 2020, said UNAMA.

UNAMA said that almost half of civilian casualties by PGFs is caused by indirect fire, such as howitzers, mortars, rockets and grenades, often used in civilian-populated areas.

“Women and children comprise almost three out of four civilian casualties from the use of these weapons by PGFs, as the projectiles often land near, or on, civilian homes,” the report stated.

UNAMA stated that the Afghanistan peace negotiations offer an opportunity for parties to the conflict to consider the irreversible loss and devastating effect that the war has had on Afghans, to acknowledge this with victims, and to address their rights to truth, justice, compensation, and reparation for the harm suffered.

“Our interviews with victims and their families reveal the near complete failure of parties to the conflict to acknowledge harm caused, nor even to make contact with them following an incident,” said Fiona Frazer, UNAMA’s Human Rights chief.

“The parties could, at minimum, acknowledge the pain caused, and look toward ways to help build reconciliation among the millions of Afghans who have suffered loss but whom desire an acknowledgement of what has happened to them, and a sustainable peace.

UN calls for a ceasefire

UNAMA said they supported the renewed call by UN Secretary-General Antonio Guterres for a global humanitarian ceasefire to be in place before the end of the year.

“Such a pause to the conflict in Afghanistan would help the fight against the common enemy of COVID-19, as well as reinforce critical efforts to prepare humanitarian assistance before winter sets in for millions of the most vulnerable Afghans. And every day without violence means civilian life is safeguarded,” the agency said.