Munir Ahmad Farhad, spokesperson for the governor of Balkh, said that the incident took place in Mazar-e-Sharif. “The shopkeepers of Mazar-e-Sharif Municipality did not set the car on fire. A mob which had blocked the road and were engaged in peddling on both sides of the road, set the vehicle on fire. The issue is currently under investigation.” 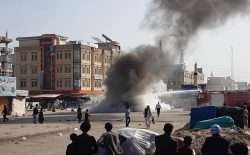 The spokesman for the Balkh governor stated that no one had been arrested yet. A municipal employee was also injured in the incident.

Meanwhile, the protesters in the area insist that municipal employees obstruct their activities on a daily basis, however, a spokesperson for the Balkh governor denied the allegations, saying that peddlers had been warned several times to not block the road.