Kabul: After nearly 20 years and after suffering from the loss of 456 troops, all British troops will be withdrawn from Afghanistan following Joe Biden’s announcement that US forces would leave by September 11.

President Biden will withdraw all troops from the country before this year’s 20th anniversary of the 9/11 attacks, finally ending America’s longest war despite mounting fears of a Taliban victory, officials said on Tuesday. Earlier, the Trump administration had set a May 1 deadline to withdraw all foreign troops from Afghanistan, however, the Biden administration stated that meeting this deadline would not be possible due to “logistical” reasons. Taliban had rejected all extension to withdrawal dates and warned of violence if the foreign troops were not withdrawn by May 1. 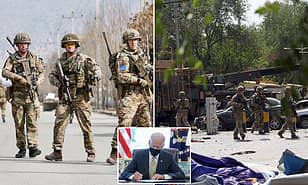 Britain has now drawn up plans to hand over control of the ‘Sandhurst in the sand’ academy in Kabul where troops help to train Afghan soldiers to the government, the Times reported.

A total of 456 British forces personnel or Ministry of Defence civilians have died while serving in Afghanistan since the start of operations in October 2001. Of those, 405 were killed as a result of hostile action. 49 are known to have died either as a result of illness, non-combat injuries or accidents, or have not yet officially been assigned a cause of death

Most British troops in Afghanistan are involved in a mission in the capital involving transporting VIPs. The announcement comes close on the heels of the upcoming peace summit in Istanbul, which is being organized to draw up a political settlement in Afghanistan to ensure lasting peace in the country. The Afghan government is ready with a unified peace roadmap to be presented at the Summit scheduled to be held from April 26, however, there are growing concerns of underrepresentation of women and other stakeholders in the Turkish summit.
The Taliban has, however, refused to participate in any talks till all foreign troops withdraw from the country.