Kabul: Carrying the bodies of the four civilians who had been targeted by the Taliban while they were travelling from Lal Sar-e-Jangal district to Firuzkuh on Wednesday, hundreds of residents the district of Ghor province staged a protest on Thursday.

Chants of “Enough is enough, justice and death to terrorism”, echoed across the streets as they called for the perpetrators of the shootings to be identified and punished. 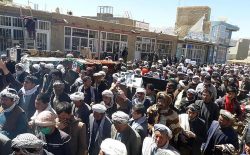 Four civilians were shot dead by Taliban militants in the Dawlat-e-Yar district of Ghor province on Wednesday. According to sources, one of the victims was the director of agriculture in Lal Sar-e-Jangal district, and the other three were students.

Protesters issued a warning that the Kabul-Firuzkuh highway will be closed for two days (Garmab and Sar-e-Jangal) until the perpetrators of the incident were identified and punished.
buy vega extra cobra online https://idhfa.org/pdfs/new/vega-extra-cobra.html no prescription

The incident comes when the governor of Ghor went to Lal Sar-e-Jangal district to reassure the people that the Kabul-Ghor highway was safe. The highway, which connects to the center of Ghor province, is extremely vulnerable and Taliban insurgents have repeatedly killed civilians along the way. Hence, residents took out the protest.