Kabul: Even though the Istanbul Summit could not take place as per schedule, a trilateral meeting between the foreign ministers of Afghanistan, Pakistan and Turkey was held on Friday to discuss the way forward in the peace process.

In a joint statement issued after talks in Istanbul, Cavusoglu and ministers of Pakistan and Afghanistan emphasised “the urgent need for an immediate ceasefire” to end the violence and “provide a conducive atmosphere” for peace talks. Afghan Foreign Minister Hanif Atmar joined the meeting via video link for health reasons, Cavusoglu said. 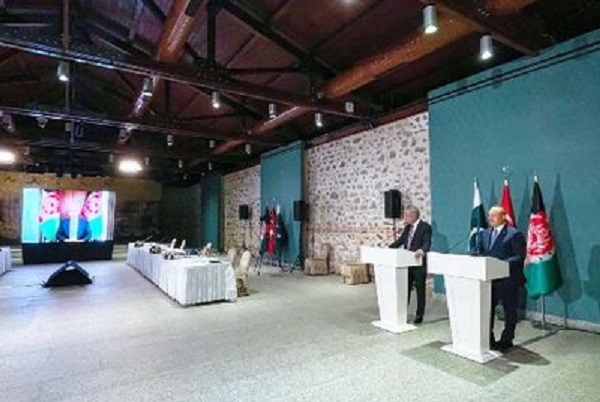 Atmar said that Afghanistan is committed to peace process, and its desire to hold a meeting involving all stakeholders remains intact. He also thanked Turkey for its readiness to host a peace conference on Afghanistan in Istanbul.

The ministers “called on all parties, in particular, the Taliban to reaffirm their commitment for achieving an inclusive negotiated settlement leading to lasting peace in Afghanistan desired by the Afghan people, the region and the international community,” according to the joint statement.

Cavusoglu said they had a chance to discuss opportunities for the establishment of peace, stability and security in the region, and the welfare of the nations in the trilateral meeting of foreign ministers, and stressed that the Afghanistan peace process was on the main agenda.

They also “deplored the continuing high level of violence in Afghanistan.”

Pakistan’s Foreign Minister Shah Mahmood Qureshi said only a negotiated political solution can resolve Afghanistan’s issue. Qureshi added that they would like to hold this meeting not only at the level of foreign ministers but also at the level of heads of state.