Kabul: All specially-trained anti-terrorism units operating under the US Central Intelligence Agency (CIA) had been transferred to the National Directorate of Security (NDS), said Ahmad Zia Saraj, chief of the NDS.

The director general of NDS also confirmed the CIA director’s surprise visit to Kabul on Saturday, but did not give further details about it. He added that the threat of terrorism from terror organizations had not been resolved and that Afghanistan’s NDS was linked to all the world’s intelligence services.

William Burns, head of US intelligence, traveled to Afghanistan in secret trip and as per reports, transferred two of the six specially trained counterterrorism units to the Afghan government during the visit. 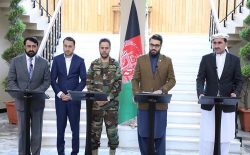 However, Ahmad Zia Saraj, the director of NDS said that the transfer of units operating under the joint supervision of Afghanistan’s NDS and the CIA had already taken place.

According to him, the CIA was involved in training and equipping these units and was a joint project from the very beginning. The Director General of NDS said that all parts “01, 02, 03 and KIPAF” have been transferred to national security, are fully operational in the national security structure.

According to him, National Directorate of Security is also responsible for the operations of these units and their work is under the supervision and management of national security.

Mohammad Yasin Zia, the army chief of staff and acting Minister of the Ministry of National Defense, also said that special anti-terrorism units had been handed over to NDS when he was deputy NDS chief. Zia stressed that one should not be influenced by ISI propaganda, because these units repel the complex attacks of the enemy and they are not “militias”.