Kabul: Reiterating that a stable and peaceful Afghanistan will in turn lead to a stable Central Asia, Mahmadtoir Zokirzoda, speaker of Majlisi Namoyandagon, Tajikistan’s Lower Chamber of Parliament, on Monday, said that collaboration with Afghanistan is one of their priorities.

Zokirzoda received Afghan Ambassador to Tajikistan Mohammad Zahir Agbar and said that Afghanistan is one of the most important things in their foreign policy. For establishing peace and stability in Afghanistan, there is a need to create favorable conditions for its peaceful development, Muhammadato Sultonov, spokesperson for the Majlisi Namoyandagon, said in an interview with local media. 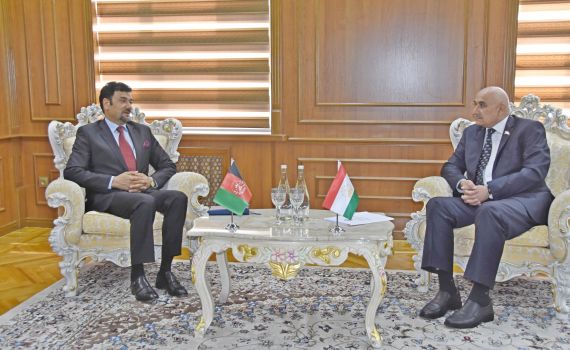 The focus should be to expand trade and economic cooperation between the two friendly neighbours and cooperation between border areas of the two countries. Hence, development of the bilateral trade is of particular importance, Zokirzoda said, adding that Tajikistan plans to double the volume of trade with Afghanistan, irrespective of external factors, including the COVID-19 pandemic.

Over 500 Afghan students study at Tajik universities, added the Tajik parliament speaker and in the past decade, more than 1,500 Afghans, including more than 100 Afghan women, have graduated from various universities in Tajikistan and earned their degree.