Kabul: If peace is achieved and observed for the next four years in Afghanistan, its GDP will increase by 7 percent, estimates a report by the UNDP titled “Achieving Afghanistan’s Long-term Goals amid Short-term Adversities ”.
The report, released on Tuesday, is the latest in a series of country Notes by UNDP Afghanistan that observes macroeconomic and fiscal situation of the country and offers policy recommendations on the way forward.
The increase in GDP will also increase the government’s revenues and ability to fund aspirational development and social programs. However, governance needs to improve and corruption to be addressed head on, otherwise things will not change for better, adds the report. 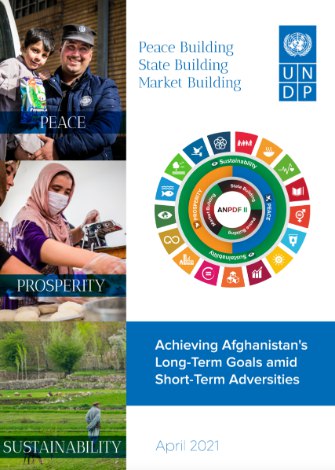 The report is part of UNDP’s ongoing policy level support to Afghanistan to give an assessment of the present situation and identify opportunities and challenges facing Afghanistan.
The report is made based on the existing official data using Computable General Equilibrium Models developed by UNDP for Afghanistan. It is intended to provide the policymakers with the evidence to better understand the policy trade-offs, and provide policy recommendations to ensure informed decision making in the face of shrinking resources.

No progress in peace and governance and a growing population along with low economic growth in the last decade has resulted in reducing per capita incomes and increasing poverty. The report estimates that, while the economy may recover its pre-pandemic level in the next two-three years, per capita incomes may still be lower by nearly 10 percent in 2024 compared to 2019. Poverty rate may raise to up to 70 percent and number of those who would need humanitarian assistance may reach 18 million by the end of 2021.

The report also estimates that improvements in the business environment and the investment climate, easing access to credit, reductions in trade costs, agricultural improvements and strengthening governance, if pursued individually, each can add between 1.5 and 2.5 percentage points to the economic growth rate. However, if these policies are pursued in tandem, GDP could increase by more than 40 percent by 2030 compared to the business-as-usual scenario.