Kabul: President Ashraf Ghani said that the Taliban have become more oppressive and non-Muslim as compared to the past and have no will for peace.

Ghani told the first digital cabinet meeting on Sunday that despite the Taliban’s reluctance to make peace, he is confident that the security situation would return to normal within the next six months. Ghani emphasized that the security of cities is a priority for the government.

He said that the Taliban had allowed international insurgent groups to enter Afghanistan. The president said that people in some parts of the country are dissatisfied with the government, but added that the government wants the constitution to be implemented properly so that the people are satisfied.

He added that despite the Taliban’s efforts, the Afghan people have shown that they have sided with the security and defense forces. Ghani accused the Taliban of lying and said the group would not enter peace talks until the country’s security situation changed. Ghani’s remarks come at a time when the war is intensifying in most provinces of the country and the number of civilian and military casualties is increasing daily. 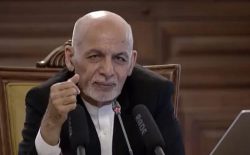 Also, security officials in Badakhshan province have confirmed that a roadside bomb had exploded in the provincial capital, Faizabad city. Badakhshan police spokesperson Sanaullah Rouhani told Hashte Subh daily that the incident took place before noon on Sunday, near the “Mazar restaurant” in Shahr-e Naw, the PD3 of Faizabad.

According to Rouhani, no one was injured in the attack. Eyewitnesses told Hashte Subh daily that the explosion took place on a police ranger in the alley leading to the Badakhshan police headquarters and damaged the houses around the scene. However, a number of Faizabad residents have complained that the police are negligent in providing security. This is the second mine explosion in the city of Faizabad in central Badakhshan. No individual or group has claimed responsibility for this incident

Meanwhile, the counter-narcotics and Border Police officers arrested a man on Saturday in connection with drug trafficking from Hamid Karzai International Airport during an operation. Detained person wanted to smuggle more than seven kilograms of “methamphetamine” type drugs abroad through the airport customs, which was identified and seized by the police. In connection with this case, another person from the PD8 of Kabul was arrested.