Kabul: The Afghan Ministry of Defense announced that 150 Taliban members were killed and 19 others were wounded in an attack by ground and air forces in Dehdadi district of Balkh province last night. According to MoD, Imam Bukri checkpoint and Dehdadi district have been cleared of Taliban influence.

The ministry said large quantities of Taliban ammunition and weapons were also destroyed in Dehdadi district. The Taliban also claimed to have captured 19 outposts, checkpoints and large areas from government forces in Dehdadi district and around Mazar city, including the Kude Bargh area, and had killed or wounded 30 government soldiers.

The conflict in northern Afghanistan has intensified in recent days. Despite the surging intensity of the clashes in recent days, 209 Shaheen Corps announced on Tuesday that General Zabihullah Mohmand was introduced as the new commander of this corps on Monday night.

The Taliban attacked the Imam Bukri checkpoint and Dehdadi district in Mazar-e-Sharif on Monday. Clashes between Taliban and army forces in Kude Barq area continued for hours, and according to reports, army forces entered the area yesterday for hours with air support, but with the wounding of Munib Amiri, the Infantry Brigade Commander at the 209th Shaheen Army Corps, the area collapsed to Taliban.

Then on Tuesday morning, an explosion was heard from the 209th Shaheen Corps and a fire was reported at the scene. The Taliban claimed responsibility for the attack by firing mortars into the ammunition depot. Nazarkhoda Pamiri, the deputy spokesman for the Shaheen Corps, told BBC that on Tuesday morning a fire broke out in an ammunition depot where bullets and unusable ammunition were stored, and that the explosion was caused by a fire restrained. 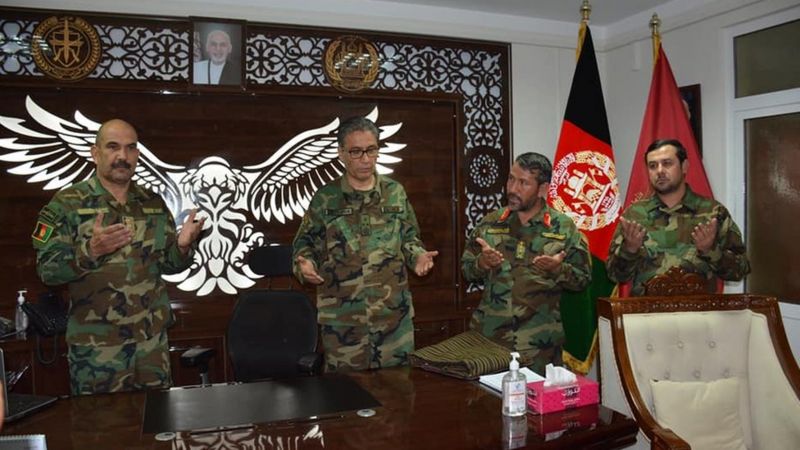 Meanwhile, health sources in Kandahar province said that five civilians were killed and 19 others were injured in overnight clashes in the province. The figures are for the dead and injured who were taken to hospital.

The health source also reported that two government forces were killed and 12 wounded. Meanwhile, army forces in Kandahar say that 36 Taliban fighters have been killed and 20 others wounded in airstrikes in Pashmul and Bazaar districts of Zherai district.

In addition, the army reported that 25 Taliban insurgents were killed and nine others were wounded in the Chaman Salo Khan, Kalchabad and Qala-e-Hashmat areas of Kandahar’s PD5. According to security sources, a number of key Taliban commanders were among those killed.

In other news, three civilians were killed and 18 others were injured in an explosion in the Kolah Sabz area of Ghazni’s PD1. Baz Mohammad Hemmat, director of the Ghazni Provincial Hospital, confirmed the news, saying that the incident took place while security forces were defusing a landmine discovered at the scene, which exploded in the area.

On the other hand, State Minister for Disaster Management, Ghulam Bahauddin Jilani, said that in the last two months, more than 60,000 families in the provinces have been displaced by the escalation of the war. The number of families who have recently been displaced from their homes and taken refuge in Kabul as a result of the violence, especially in the north, has risen to 17,000 according to the Minister of State for Disaster Management.

Jilani, who spoke at a news conference on Tuesday at the Government Information and Media Center, about the displacements across the country over the past two months, expressed concern that the figure of displaced people in Kabul may reach 30,000. Jilani clarified that the urgent process of caring for the families, who have mainly gathered in the Saray Shamali area and Kabul Shahr-e Naw Park, started on Monday and continued until midnight.

He said that the emergency committee consisting of the Ministry of State for Disaster Management, the Ministry of Refugees and Repatriations and Kabul province has started work on setting up a camp for temporary accommodation of IDPs in one part of Kabul city and this camp is scheduled for to be ready in a week. According to him, there will currently be a capacity to distribute 3,000 to 5,000 tents to eligible displaced families in the camp.

According to the Ministry of State for Disaster Management, the number of displaced families from the recent two-month war in the provinces has reached 60,000, of whom 53,000 have received emergency assistance. The Minister of State for Disaster Management, meanwhile, called on international organizations to work with the Afghan government to address the needs of internally displaced people and to urge the Taliban to address the plight of people in the following areas to prevent widespread displacement of families.