Kabul: The defense and security forces and commandos, with the support of the air force and popular uprising, repulsed Taliban attacks in Balkh province.

As per 209 Shaheen Corps, the Taliban wanted to break the Imam Bukri line of defense in Dehdadi district and the Langar Khana of Nahri Shahi district with their offensive attacks on Monday. As a result of these clashes, more than 80 Taliban insurgents were killed, an enemy base and a large amount of equipment and explosives were destroyed.

Also, as per the Badakhshan governor’s office, the Taliban’s offensive was repulsed on Monday night by several strongholds in the city of Faizabad, the capital of Badakhshan province. Meanwhile, police in PD11 of Herat city also arrested two Taliban terrorists from the area. The residents of Dolayna district of Ghor province belong to Maulavi Talha Shindandi’s group, a Taliban commander who also fought in the battles east of Guzara district and west of Injil district. The detainees confessed to being terrorists and their case file was handed over to the relevant body.

However, amid the advance of the Taliban, the US is showing no signs of stepping up air attacks, with a Pentagon spokesman saying that Washington now sees the fight as one for Afghan political and military leaders to win or lose. “When we look back, it’s going to come down to leadership and what leadership was demonstrated, or not,” by Afghans, Pentagon spokesman John Kirby said at a news conference. “It’s their country to defend now. It’s their struggle.”

US officials said that military commanders have bluntly laid out their assessments that conditions in Afghanistan are deteriorating. Afghan special operations forces have been able to hold off the Taliban in key centres, including Kandahar and Lashkargah, they said. But in locations where the commandos have not been sent in, regular army forces have been overrun. 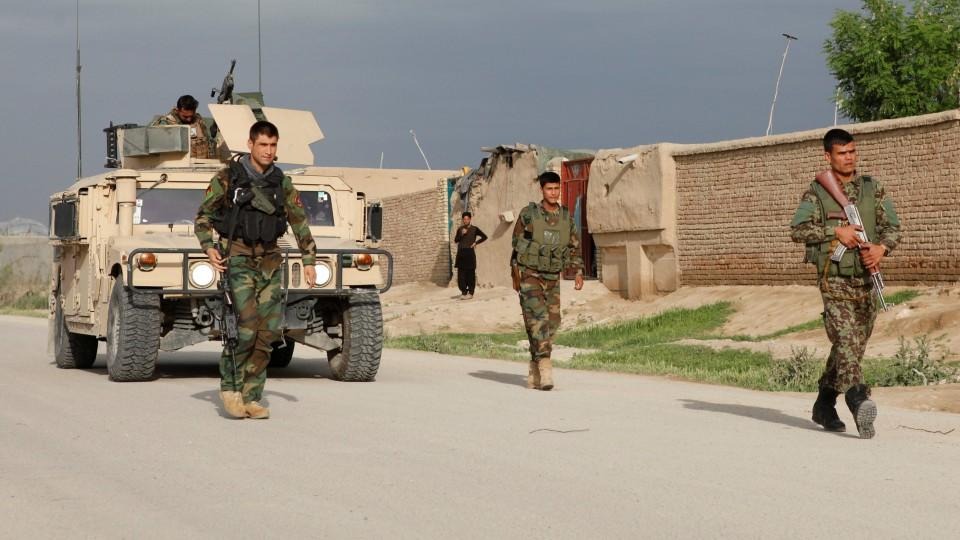 Army General Mark Milley, the chairman of the Joint Chiefs of Staff, spoke with his top Middle East commander, General Frank McKenzie, on Monday, officials said. But defence and military leaders have not provided any new recommendations to beef up US operations in defence of the Afghans. The US has been launching up to a handful of air attacks a day on the Taliban and officials said there has so far been no order to increase that tempo.

There are no US attack aircraft in Afghanistan as the US troop withdrawal continues, so warplanes are travelling from several hours away to reach their targets. Kirby refused to say how many air attacks the US has carried out in recent days and he declined to say whether the Biden administration might continue the air attacks past Biden’s August 31 withdrawal date, given the Taliban advance.

In the meantime, “we will continue to support them … where and when feasible, understanding that it’s not always going to be feasible,″ Kirby said of Afghan government and military leaders.

On the other hand, Foreign Secretary Masud Bin Momen of Bangladesh on Monday said that the United Nations should step up efforts at this critical juncture in Afghanistan as Bangladesh does not want to see people in Afghanistan suffer anymore. “While we welcome peace talks involving important players, I think, the United Nations as a neutral broker should step up efforts at this critical juncture,” he said adding that Bangladesh wants to see a fellow South Asian State, a fellow member of SAARC and its people remain free from any sufferings.

On the fast-evolving situation in Afghanistan, the foreign secretary said that they are currently observing a radical transformation taking shape in Afghanistan, which is sure to have a profound effect on the geo-political balance of power in the region and beyond.

Also, government ministers from six European countries have called on the EU leadership to continue returning migrants to Afghanistan. A leaked letter posted online on Monday revealed that the interior ministers of Austria, Denmark, Belgium, the Netherlands, Greece and Germany urged the European Commission last week not to accept a decision by the Afghan Ministry of Refugees and Repatriation to halt forced returns to the country for three months.

The ministers in the August 5 letter say they “fully recognise the sensitive situation in Afghanistan in light of the foreseen withdrawal of international troops” — but that they do not “foresee any cause to stop or suspend returns.” The ministers go on to say that they “would like to highlight the urgent need to perform returns, both voluntary and non-voluntary, to Afghanistan. “In view of the expected likelihood that Afghanistan will continue to be a significant source of irregular migration to the EU, we would like to underline the importance of returning those without genuine protection needs.”

The ministers claim that stopping returns “sends the wrong signal and is likely to motivate even more Afghan citizens to leave their home for the EU.” The European Council on Refugees and Exiles (ECRE) was just one of the human rights organisations that branded the letter “shameful”. “Seriously? Turmoil and violence in [Afghanistan] escalating alarmingly. Priority for six EU states: returning people and preventing displaced Afghans arriving in Europe,” the ECRE said on social media.

This comes even as UNHCR, the UN Refugee Agency, is extremely concerned by the rapid escalation of conflict in Afghanistan this week. Amid intensified clashes in Nimruz province in the country’s south-west, nearly 200 Afghan refugees have been forced to flee to the Islamic Republic of Iran over the weekend. “It is estimated that since the beginning of the year nearly 400,000 Afghans have been internally displaced within the country – some 244,000 since May alone. UNHCR urges the Iranian authorities to keep the Milak border crossing open in light of the intensifying humanitarian crisis in Afghanistan. Not doing so may put thousands of lives at risk,” the statement read.

On the other hand, the Committee to Protect Journalists said on Monday that Afghan authorities must immediately and thoroughly investigate the killing of journalist Toofan Omar and ensure the safe release of journalist Nematullah Hemat. “Afghan authorities must conduct an independent and thorough investigation into the killing of Toofan Omar and must spare no expense in securing the safe release of Nematullah Hemat from Taliban custody,” said Carlos Martínez de la Serna, CPJ’s program director. “Journalists must be able to cover this important moment in Afghanistan’s history, and authorities should do everything possible to ensure they can do so safely.”