Kabul: The Afghan government confirmed on Wednesday that hundreds of prisoners had escaped due to heavy fighting in a number of provinces.

Safiaullah Jalalzai, a spokesman for the Afghanistan Prison Administration, told VOA on Wednesday that the detainees had escaped from war-torn provinces. “The vast majority of them were prisoners convicted of criminal offenses, drug traffickers, kidnappers and criminals convicted of armed robbery,” he added.

Jalalzai said that the escape of these prisoners would cause them to resume their criminal activities in the community. But the spokesman for Afghanistan’s prison administration stressed that the Afghan government would look for the perpetrators by establishing security and improving the situation.

Last week, videos of prisoners escaping from Takhar prison and some other provinces were posted on social media. Dozens of prisoners have already escaped from prisons in some Afghan provinces following attacks by the Taliban and ISI-K. The Afghan government released nearly 5,500 Taliban prisoners last year under US pressure, a move that Afghan Vice-President Amrullah Saleh said was one of the government’s biggest mistakes.

The Afghan government says many released Taliban fighters have returned to the battlefield despite their commitment and are currently fighting Afghan security forces. In the latest case, the Taliban have demanded the release of another 7,000 prisoners in order to build trust, according to the group’s representatives, and start peace talks, a request that has so far been rejected by the Afghan government.

Meanwhile, security officials in Khost province said on Wednesday that at least one child had been killed and four others wounded in a mortar attack on a residential house in the province. The attack took place on Tuesday night in the Sabri district of Khost, Najib Ahmad Najib, spokesman for the province’s police chief, told VOA on Wednesday. Najib added that the mortar had been fired by a Taliban fighter to target Afghan troops, but had hit a residential house, killing a child. The United Nations Children’s Fund (UNICEF) said two days ago that the escalation of violence against children in Afghanistan is shocking.

In other news, David Miliband has criticized “significant” foreign aid cuts by the UK, warning further withdrawal of support to Afghanistan would “compound the agony” for civilians. The former foreign secretary, who now leads the International Rescue Committee, said the region was facing a “crisis” following a major Taliban surge in the wake of UK and US military withdrawal earlier this year.

The major advances come in the wake of aid cuts by several major European countries, including the UK, which slashed its foreign aid assistance from 0.7% of national income to 0.5%. Speaking on Wednesday, Miliband told the BBC that he feared further political and diplomatic withdrawal from the country in the wake of the reduction in military support. “This should definitely be seen as a regional crisis rather than just a national trauma for civilians who are being caught in a terrible crossfire at a time when international aid flows are falling,” he said.

“The British government’s aid contribution is falling from about £80m-a-year to just less than £20m-a-year, so significant cuts. “The UN appeal is underfunded to the tune of about 50% and that is at a time when 18 million Afghans out of a population of about 40 million are dependent on international humanitarian aid.” 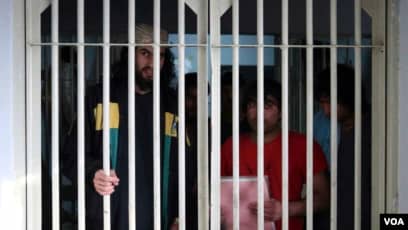 He added: “Our great fear at the moment is that once the military decision has been taken, that is obviously no longer for discussion, that there will be a humanitarian and diplomatic withdrawal as well which will compound the agony for Afghan civilians.”

Miliband also criticized plans by some European nations to press ahead with the deportation of Afghan refugees back to their home country, saying the move would be “completely contrary to international law”. “The idea that now is a moment to return Afghans to Kandahar or even to Kabul seems fanciful. This is a time when, certainly those who are in danger because of the work they have done need to be sheltered.”

His comments come after several senior Tory MPs called for further action to tackle the Taliban resurgence, with former defence minister Tobias Ellwood saying the current approach was “the west’s biggest own goal so far this century”.

Meanwhile, the Director General of Department of South Asian Affairs at the Iranian Foreign Ministry informed of his talks with European envoys and charge d’affaires residing in Tehran to find a solution for Afghan crisis. In a tweet on Wednesday, Seyed Rasoul Mousavi wrote, “If Europe wants to do something for achieving peace in Afghanistan, it must act today, because, it will be too late tomorrow.”

During the meeting with European ambassadors in Tehran, Mousavi called on them to take urgent measure in line with establishing peace in Afghanistan. If Europe wants to do something for establishment of peace in Afghanistan, it must act today, for, tomorrow it will be too late, he reiterated. Effective steps must be taken for peace in Afghanistan before collapse of all structures, Director General of Department of South Asian Affairs at the Iranian Foreign Ministry added.

On the other hand, just weeks before US troops fully withdraw from Afghanistan—and as Taliban fighters conquer more territory across the country—Ahmad Massoud says he is open to negotiations with the Taliban. “I am willing and ready to forgive the blood of my father for the sake of peace in Afghanistan and security and stability in Afghanistan,” said Massoud, son of the anti-Soviet resistance commander Ahmad Shah Massoud, in an interview with the Atlantic Council’s South Asia Center. Massoud’s father was assassinated by al-Qaeda days before the 9/11 attacks in 2001.

But he and other Afghans are not willing to “give in to the will of terrorism,” added Massoud, who is based in the government-controlled Panjshir province in northeastern Afghanistan. “We are ready to create an inclusive government with the Taliban” through political negotiations, he explained, but what’s unacceptable is an Afghan government marked by “extremism and fundamentalism” that would pose a grave threat not just to Afghanistan but to the region and the wider world.

Massoud reflected on what brought Afghanistan to this perilous point and outlined the way forward for a peace process he believes has failed. The 32-year-old is among the prominent voices pushing for the resurrection of a coalition of anti-Taliban ethnic militias akin to the Northern Alliance of the late 1990s. Massoud believes the only way the Taliban can play a role in Afghanistan’s future is if its members cease fighting—a message he says regional powers must help deliver. “It is [the Taliban] who are spreading the fire, not us,” he stated.

That, however, is a daunting task. Massoud explained that today’s Taliban fighters have become “even more radicalized than their fathers who fought in the 90s” thanks to their links with modern jihadist groups such as ISIS and al-Qaeda. “The Taliban have not been reformed,” he asserted.

The most effective way to pressure the Taliban to talk is through deterrence. Once the group’s leaders realize they can’t achieve their goals militarily in Afghanistan, they’ll likely be more open to political dialogue, Massoud maintained.