Kabul: Afghan officials said that the Taliban have attacked Kandahar from several directions, but security and defense forces have repulsed the attacks.

Mohammad Sadeq Essa, spokesman for the 205th Atal Corps, told VOA on Wednesday that the Taliban had carried out attacks in the third, sixth, fifth and 15th PDs of Kandahar, and clashes are currently taking place between the two sides in these areas. He added that the city of Kandahar would soon be cleared of the Taliban and the situation would return to normal.

“This morning, large numbers of Taliban fighters attacked parts of the city and put a lot of pressure on the Kandahar public prison. Our joint forces repelled Taliban attacks and protected the prison,” he added. He also said that Taliban gatherings in the province had been bombed by the Afghan Air Force, killing 15 Taliban fighters.

As fighting escalates in central Kandahar, the city is said to have taken on a “war face” and hundreds of families have fled the area. The Taliban said they had seized parts of Kandahar City in the attacks, but the provincial police chief issued a statement denying the group’s claim, saying Afghan troops are present in all areas of the city.

Meanwhile, Mohammad Davood Farhad, director of the Mirwais Regional Hospital, told VOA that 68 injured people had been transferred to the hospital since last night, including eight women and nine children. “Dozens of wounded are currently being treated at Mirwais Hospital, and we are currently providing services to war victims,” Farhad added. Mirwais Hospital is located about one kilometer from Kandahar Public Prison, and officials say clashes have erupted near the hospital.

Also, the Taliban have announced an attack on the city of Tarinkot, the capital of Uruzgan province. Uruzgan officials also confirmed the attacks but said they had responded strongly. Mohammad Omar Shirzad, the governor of Uruzgan, said that last night Taliban fighters attacked the Tarinkot from the east and west, which was met with a strong response from security forces. Shirzad says that the people’s forces also fought the Taliban last night alongside the security forces and gave a clear warning to the Taliban.

However, security sources told Salamwatandar that Taliban fighters launched attacks on the areas of Sardawra township and Kunduz airport. According to sources, the forces stationed at Kunduz Airport have retreated with their vehicles and equipment to the 217th Pamir Corps. Sources said that security forces in the 217th Pamir Corps have been deployed and warplanes are currently bombing the Taliban around Kunduz airfield. Kunduz security and local officials have not yet commented. 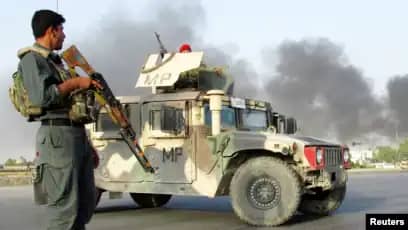 The source said that the incident took place on Tuesday evening on Hindu Ha Alley in the PD2 of Ghazni city. According to the source, he was targeted by the “unidentified men” when he returned home. No individual or group has claimed responsibility for the attack.

On the other hand, the NDS arrested a would-be suicide attacker in Pachir wa Agam district of Nangarhar province on Wednesday, before reaching his target, as per the provincial governor’s office.

Meanwhile, the “Movement of Change” political movement, led by Fawzia Koofi, a member of the peace negotiating team for the Islamic Republic of Afghanistan, said on Wednesday that the Taliban must respect the dignity of women.

Fatema Massoud, a member of the Movement of Change political movement, read a statement at a news conference in Kabul on Wednesday, saying that the warring parties must allow women and girls access to their services and rights like other citizens. The statement stressed that the two sides in the war should not take the opportunity of humanitarian aid to the people of Afghanistan, especially women. According to the statement, the people of Afghanistan, especially women and children, have suffered casualties during the wars in different parts of the country. The Afghan government and the Taliban have vigorously refrained from vandalizing public facilities, killing civilians, arbitrarily punishing them, forcing them to flee and dozens of other human rights abuses.

Koofi said the situation needed serious attention and that the Taliban should act responsibly in the areas under their control. She stressed that if the Taliban group is thinking of forming a government in Afghanistan, it must be in front of the people; women in particular. Fawzia Koofi also called on the international community to stop being an “observer” in Afghanistan. According to her, the international community must use its political power to ensure lasting peace in Afghanistan.

Meanwhile, the Taliban has taken complete control of Afghanistan’s borders with Uzbekistan and Tajikistan, Russia’s defense minister revealed on Tuesday, noting that the terrorist organization has promised not to move across either frontier. “For us, it is important [to note] that the borders with Uzbekistan and Tajikistan have been taken under control by the Taliban,” Defense Minister Sergey Shoygu told a youth educational forum on the outskirts of Moscow.

The Taliban “promised not to make any attempts to cross the border and attacks on neighboring territories,” Shoygu said. Shoygu also noted that Moscow would set up bases on the territories of two of its CSTO allies – Tajikistan and Kyrgyzstan. With the Taliban on the border, Russia has been conducting war games in Central Asia alongside Uzbek and Tajik troops. Taking part in the drills were 2,500 soldiers, including 1,800 from Russia.