Kabul: Local officials in Badghis province said that a 25-day ceasefire between the Afghan government and the Taliban has ended with the resumption of Taliban attacks.

Badghis Governor Hessam ul-Din Shams told Etilaat roz daily that the Taliban had resumed their attacks on security belts in Qala-e-Naw, the capital of the province, on Wednesday evening. Shams added that heavy fighting between government forces and the Taliban had continued until 3:00 am on Thursday morning.

According to him, the Taliban planned to attack Qala-e-Naw from three directions, but the attacks were repulsed by government forces. But the Taliban claim to have taken control of parts of Qala-e-Naw, including the PD5.

The Badghis provincial media office said that a ceasefire between the government and the Taliban has been violated by Taliban attacks on Qala-e-Naw, the provincial capital. Badghis Governor Hesamuddin Shams wrote on his official Facebook page that the Taliban had attacked parts of Qala-e-Naw by breaking ceasefire, but that their attacks had been repulsed by security forces. 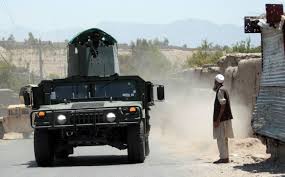 He added, “The city of Qala-e-Naw is invincible. On behalf of the leadership of the Badghis Coordination Council, I assure you that we will teach the enemy a historical lesson.”

Previously, the government and the Taliban established ceasefire to the Eid al-Adha with the mediation of the Badghis tribal elders. Earlier, the Taliban entered the city of Qala-e-Naw and for several hours took control of the police headquarters, the National Directorate of Security, the central prison and several government offices in the province. Currently, six districts of Badghis are under the control of the Taliban, and the government controls the city of Qala-e-Naw and part of the Herat-Qala-e-Naw highway.

Meanwhile, local officials in Herat province said that the Taliban attack on Herat city has been repulsed.
buy prelone online gaetzpharmacy.com/prelone.html no prescription

Also, local sources in Ghazni province said that the Taliban have attacked the center of Ghazni from several directions and clashes are currently taking place around the provincial building and the National Directorate of Security. Nasir Ahmad Faqiri, chairman of the Ghazni Provincial Council, told Hashte Subh daily that the Taliban had attacked Ghazni province from several directions on Wednesday night.

According to him, the Taliban have reached the city center and now the war is going on around the National Security Directorate.