Kabul: President Ashraf Ghani, addressing the extraordinary session of the parliament on Monday, said that the Afghan government and people have made their choice and will not bow to any destructive force. The president said that the time has come for the national dialogue to begin and that unity is a condition for survival.

Ghani said that in such a situation, it is not his job as president to become emotional; because the people want him to resolutely pass Afghanistan through this test of survival. “While this devastation and daily bleeding hurts the cells of my body, I stand firmly in my place. I am 72 years old and I am not looking for any wealth or privileges, but I want today’s generation and tomorrow to have a prosperous life,” he said.

Ghani emphasized that he would not kneel before any destructive force. “Or we sit on our knees at the real negotiating table, or we break your knees on the battlefield,” he told the Taliban. “We have made our choice, let the Taliban and their supporters make their choice,” added Ghani.
buy xenical online https://www.quantumtechniques.com/wp-content/themes/twentytwenty/inc/new/xenical.html no prescription

Ghani said that the Afghan government has made many sacrifices for peace and has taken great strides that no group or country can take anywhere in the world; but the Taliban deem the government’s sincerity as weakness. “The problem started when Afghan and international peace lessons were not followed and a national process was replaced by an accelerated imported process. This process was based on crude hypotheses and was based on the pressure on the republic and the destruction of democracy. Not only did this process not lead to peace, efforts were made to legitimize an aggressor and a vicious group, as well as efforts to delegitimize a single republican position, creating ambiguity and doubt, and the current situation is the product of this situation,” he added.

The President said that the priority of the Republic is peace, but he sees sedition in the intentions of the Taliban and its supporters. He said the Taliban were hostile to the people and were doing so in exchange for money. Ghani said that with the withdrawal of foreign troops from Afghanistan, it is everyone’s responsibility to address the dangers that have arisen. 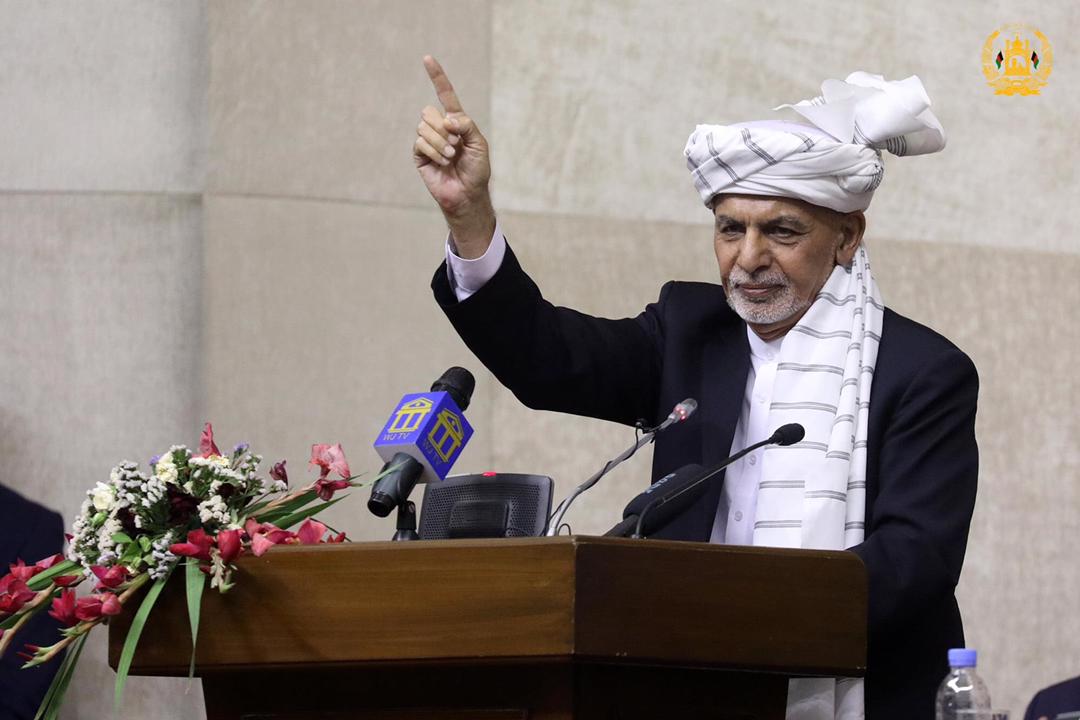 “Two and a half years ago, I wrote to the US President to decide on the withdrawal of his troops. This work of mine was criticized. The reason for the current situation is that the right decision was not made. The exit of the United States will lead to dangers. Managing this risk is our sole responsibility,” he said. The president called on parliamentarians to work together to ensure that security forces are in the expected position in the next six months.

“We will rise again with vigor. We are facing an unprecedented invasion of terrorism. We are facing an onslaught with a dark-minded mindset, followed by drug traffickers and gemstones. The emergence of this suspended obstacle has caused the Taliban to see their advantage in the war. This miscalculation will humiliate the Taliban,” he claimed. Although no foreign troops are present in Afghanistan, the president said, but within the new chapter of relations, financial and military support for the ANDSF will continue.

Also, Mir Rahman Rahmani, speaker of the Lower House of Parliament, said that the continuation of the war has no winner and that the Taliban should know that as violence escalates, civilians will be killed. Addressing the extraordinary joint session of both parliament houses, Rahmani said that the parliamentarians “appreciate the government’s efforts to bring peace and do not see war as a solution. The Taliban should know that the continuation of war and violence is a lose-lose game and it has no winner and hurts the people.”

According to him, the withdrawal of the US and NATO placed the full responsibility for the fight against terrorism on the ANDSF. Rahmani emphasized that in such circumstances, the parliamentarians would support the ANDSF and stand by them on the battlefield. Rahmani also appreciated the support of the people’s forces for the ANDSF.

Appreciating the role of security forces, the Parliamentary Statement, read, “The brave ANDSF and people forces, as the true and honest sons of this country, who lose their lives day and night in defending the country and providing security by shielding their chests against the enemy are and will be supported by this House and appreciates their work and sacrifices. One of the long-standing aspirations of the people is, above all, peace and the establishment of permanent security. We support every effort to bring peace and stability in the country and we will do our best in this field.”

The parliamentary statement also called on the Taliban and other armed opponents of the government to end the machines of orphanage, Islamic defamation and economic destruction, avoid further destruction of the history of regional civilization, and to join the peace. It also called on the United Nations, the United States, the involved countries, the international and regional organizations and the Organization of Islamic Cooperation to provide material and political support to the people and government of Afghanistan, as they have for the past two decades, and help us achieve a permanent and enduring peace.

Meanwhile, Second Vice-President Mohammad Sarwar Danesh supported President Ghani’s speech at an extraordinary session of the parliament, saying that now is the time for the Afghan people to mobilize against the Taliban. Danesh wrote on his Facebook page on Monday that now that the government leadership has explicitly declared its key priorities in the face of Taliban aggression, the Afghan people are expected to mobilize against the ignorant group, unite with the ANDSF, and deprive the Taliban of their dream for a Taliban emirate.