Kabul: The US Special Representative for Afghanistan Reconciliation Zalmay Khalilzad has said that if the Afghans do not reach a political agreement, the country could plunge into a prolonged war.

In an exclusive interview with Radio Azadi, Khalilzad said that the parties involved should prioritize national interests. “The peace talks that began after the [Qatar] agreement have not progressed much and the two sides are focusing more on a military solution. It is time for the leaders to prioritize and take the talks more seriously to reach an agreement more quickly instead of thinking they can resolve the issue through war,” he said.

Khalilzad said that the Doha agreement necessitated and committed the Taliban to negotiations for a new Islamic government in Afghanistan and a comprehensive cease fire. “The Taliban cannot conquer Afghanistan and have a government that has the support of the overwhelming majority of the Afghans and international support. Maybe some Taliban think there is a military solution to the conflict although they tell us otherwise. When they speak to us the Taliban says there is no military solution. But if some commanders or some military leaders think that they are miscalculating because there will be resistance and even if they take over the country, there will be resistance and there will be international opposition that they won’t be recognized that they will not receive international assistance, and they will become a pariah state which they say they don’t want.”

Khalilzad said that it is now the obligation of the Afghan leaders, Taliban and the Afghan government to recognize that there is no military solution and their engagement with each other will bring peace.

Khalilzad added that the continuation of the war would have no consequences other than inflicting casualties on the Afghan people. He made the remarks as the fighting intensified in Herat, Helmand, Kandahar and a number of other provinces. Clashes in Kandahar city and provincial districts have forced 22,000 families to flee their homes in the past three weeks. Dost Mohammad Nayab, provincial director of refugees and repatriations affairs, told Radio Azadi that most of the IDPs, who are women and children, have been relocated to government buildings. “Nearly 22,000 families have been evacuated from 7 PDs of Kandahar city and districts of the province, where the clashes are ongoing, to safe areas. We have relocated almost 9,500 people to government buildings, most of whom are women and children,” said Nayab. 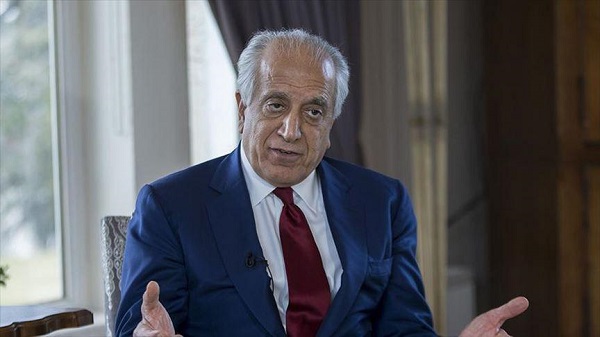 This comes even as at least 80,000 children in Afghanistan have fled their homes since the start of June as violence has swept parts of the country, Save the Children warned on Monday, and are in dire need of food, shelter and medical care. “Many of the children are living with their families under tarpaulin sheets held up with sticks, with nothing but a few rugs to soften the hardened clay and some surviving on energy drinks and bread,” the organization stated.

According to the UN, around 130,000 people have had to leave their homes and villages in the past two months alone, 60% of them children. In total, more than 613,000 people, including 362,000 children, have been displaced over the past 12 months. In the northern province of Kunduz, which is home to the country’s highest number of internally displaced people (IDPs), there are more than 60,300 people living in makeshift camps. Save the Children warned that hundreds of thousands more children are at risk of becoming severely malnourished due to a lack of food and other basic needs in the camps, exacerbated by the worst drought in years.

Displaced children are also at increased risk of being forced into marriage or child labour or recruited into armed groups, Save the Children warned. Chris Nyamandi, Save the Children’s Country Director in Afghanistan, said, “The many thousands of children who have been forced to flee their homes in the past few months could not be any clearer indication of the catastrophic impact that the recent escalation of the conflict is having on children. In addition to those living in horrific conditions in displacement camps, we’ve seen a record increase in the number of children killed or injured in the crossfire of the conflict, as well as the destruction of schools and health facilities. This should be a wake-up call to the international community to keep investing in Afghanistan’s future before any progress that has been made here unravels completely. We call on all parties to stop the violence and protect civilians, especially children and respect their obligations under international humanitarian law. All efforts must be made to agree on an enduring peace settlement so that future generations of children can grow up in a country free of the fear of violence, death, and injury.”

In fact, even MSF stated that between July 29 and 31 alone, MSF treated 70 war-wounded patients. In total from May 3 until July 31, we have treated 482 war-wounded people, nearly all (92 per cent) for injuries caused by shells and bullets, and around a quarter (26 per cent) aged under 18. The patients seen by MSF are just a fraction of the total number injured by the violence, it said.

“The fighting exacerbates health needs beyond trauma care. Given the lack of well-functioning and affordable medical facilities in Helmand, people rely on the 300-bed Boost hospital, the only referral hospital in the province, for essential neonatal, paediatric, inpatient, intensive care, maternity, malnutrition, and surgical services among others. Since May, however, MSF staff have witnessed an alarming increase in the severity of patients’ illnesses when they arrive at the hospital. People have described how, despite needing medical care, they have been forced to wait at home until the fighting subsides or to take dangerous alternate routes. With fighting taking place not far from Boost hospital, and people too afraid to leave their homes due to the violence, access to healthcare is dangerously limited,” it added.