Kabul: As war escalates in the cities, sources report the progress of peace talks in Doha. A source in the government’s negotiating team said that the Taliban has agreed to restart discussions on key issues.

A source in the government’s negotiating team, who did not want to be named, told Hashte Subh daily that discussions are under way and that the two sides had agreed to discuss key issues such as political participation, the constitution and the establishment of a ceasefire. He added that an agreement has been reached to speed up peace talks and start discussions on key issues. The source stressed that discussions should begin on these issues in order to prevent further civilian casualties in the country.

Although the government has repeatedly called on the Taliban to start discussions on key issues, the group has so far refused to comply. The government recently sent a high-level delegation headed by High Council for National Reconciliation Chairman Abdullah Abdullah to Doha to discuss key issues such as political participation, mediation and a ceasefire. The talks, which took place behind closed doors for two days, were unsuccessful. The two sides only agreed not to damage infrastructure on the battlefield and to allow health workers to provide health services to COVID-19 patients under their control. Sources in Doha now say they have just agreed with the Taliban to restart discussing key issues.

The peace talks come even as the Human Rights Watch said on Wednesday that Taliban forces advancing in Ghazni, Kandahar, and other Afghan provinces have summarily executed detained soldiers, police, and civilians with alleged ties to the Afghan government.

Residents from various provinces told Human Rights Watch that Taliban forces have in areas they enter, apparently identify residents who worked for the Afghan National Security Forces. They require former police and military personnel to register with them and provide a document purportedly guaranteeing their safety. However, the Taliban have later detained some of these people incommunicado and, in cases reported to Human Rights Watch, summarily executed them.

“Summarily executing anyone in custody, whether a civilian or combatant, is a serious violation of the Geneva Conventions and a war crime,” said Patricia Gossman, associate Asia director. “Taliban commanders with oversight over such atrocities are also responsible for war crimes.” 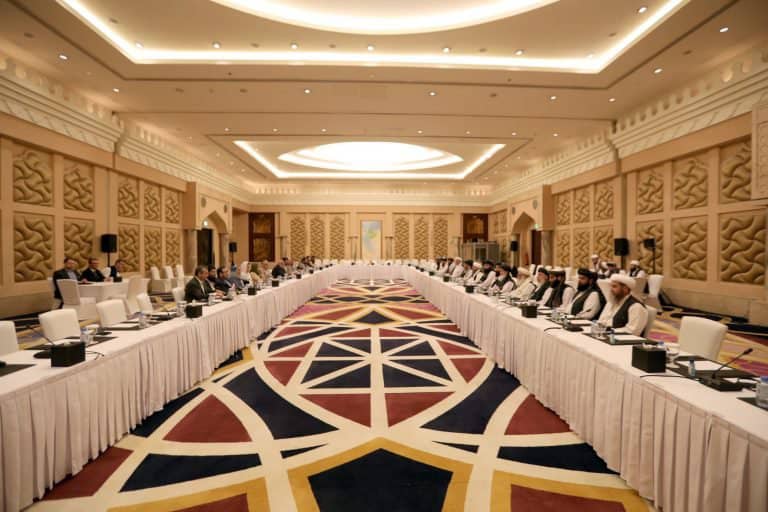 Human Rights Watch obtained a list of 44 men from Spin Boldak, Kandahar, whom the Taliban have allegedly killed since July 16. All had registered with the Taliban before being summarily executed. Waheedullah, a police commander from Spin Boldak, had obtained a “forgiveness” letter from the Taliban, but Taliban fighters took him from his house and executed him on August 2, activists and media monitoring these detentions in Kandahar said. Ghazni residents said that Taliban forces entered their neighborhoods on July 11, after Afghan government forces withdrew from the city. Taliban forces then searched house-to-house, apparently to identify residents who had worked for the provincial or district government or security forces. They took into custody dozens of residents, some of whom were later released after being compelled to provide assurances they would not cooperate with the government. Human Rights Watch could not confirm the status or whereabouts of those not released.

International humanitarian law prohibits detaining civilians unless absolutely necessary for imperative security reasons, said the HRW. Retaliatory detentions are a form of collective punishment and are also prohibited, it said. The International Criminal Court (ICC) is currently investigating allegations of war crimes and serious human rights abuses by all parties to the conflict, including the Taliban. “Taliban forces need to recognize that in new areas under their authority, they are obligated to ensure that all civilians are protected,” Gossman said.

Even, the governor of Kandahar claims that the Taliban have arrested hundreds of people in Spin Boldak district and transferred them to prisons across the border in retaliatory attacks. Ruhollah Khanzada told Afghan National Television on Tuesday night that more than 40 bodies had been found so far.

“Hundreds have disappeared but not all of them have been found. Only 40 to 45 bodies have been found. In my opinion, the detainees have been transferred across the border and are being held there. Most of them are soldiers and government employees,” he said. Earlier, the US and British embassies in Kabul said in a joint statement on Monday that the Taliban had killed dozens of civilians en masse in retaliatory attacks. According to the declaration, such killings could be considered war crimes.

The Afghan Independent Human Rights Commission (AIHRC) says the Taliban have arrested or killed about 400 civilians since capturing the Spin Boldak district. The Taliban have denied the allegations.

In other news, Supporting open media in Afghanistan Nai, released a statement asking the Taliban to find a journalist who was abducted in an area under their control and release the journalist.

“Information obtained by Nai office shows that Maiwand Mirani, a radio and television reporter, was dragged out of the vehicle he was travelling in along the Helmand to Kandahar highway in a Taliban-controlled area on Tuesday and was taken to an unknown location,” the statement read. Nai urged the Taliban not to deal with journalists and media workers, as promised by their leaders, and to find and release him as soon as possible. It also called on the Afghan government to release four journalists detained.

In another report released by the UN, it said that stepping up ongoing efforts to address corruption in Afghanistan remains critical. UNAMA’s fifth annual anti-corruption report, titled “Afghanistan’s Fight against Corruption: Stepping up integrity, transparency and accountability,” finds that Afghanistan has taken positive steps towards establishing solid anti-corruption legal and institutional frameworks but that numerous shortcomings remain, including the need to further increase transparency, integrity, and accountability.

To its credit, during the period covered by the report, from January 2020 to May 2021, the Government has continued supporting anti-corruption reforms. The worsening impact of the COVID-19 pandemic, ongoing peace talks and increased violence after the announcement of international troops’ withdrawal, have however slowed down the pace of reforms.

The report acknowledges positive developments such as the establishment in November 2020 of the Anti-Corruption Commission in line with the UN Convention Against Corruption. Such an entity has the potential to advance anti-corruption reforms, provided its independence is ensured and it is enabled to fully perform its functions. It also refers to the adoption of new legislation on whistle-blowers protection during the reporting period, which should also strengthen, if effectively implemented, the fight against corruption.

The report further acknowledges an increase in the number of cases processed by the specialized anti-corruption tribunal (Anti-Corruption Justice Center) and the important role of the Supreme Court in increasing accountability, which should reduce corruption-related crimes. It recommends enhancing the capacity of law enforcement to detect corruption crimes and arrest alleged perpetrators regardless of their status. “Effectively fighting corruption goes hand in hand with increasing State legitimacy, prosperity and stability,” said Deborah Lyons, the UN Secretary-General’s Special Representative for Afghanistan.

While progress is being made in strengthening legal and institutional frameworks in particular, ongoing efforts to enhance monitoring and oversight mechanisms; streamline public funding and revenue management; and increasing transparency, integrity and impunity, need to be stepped up. UNAMA stands ready to continue supporting Afghanistan to advance anti-corruption reforms to address remaining challenges. Considering the critical role of civil society and media in fostering transparency and exposing corruption, the report recommends that anti-corruption stakeholders continue engaging and supporting civil society and media. It also encourages the Government to protect media given the alarming increase of attacks targeting journalists.