Kabul: A powerful car bomb explosion rocked an upscale neighborhood of Afghanistan’s capital on Tuesday in an attack that apparently targeted the country’s acting defense minister.

The MoI has confirmed to the local media that eight individuals including a woman was killed and over 20 others were wounded in the incident. Several smaller explosions could be heard as well as small arms fire.

The Taliban claimed responsibility for the complex attack against Acting Defense Minister Bismillah Khan Mohammadi’s residence. The attack came as Taliban insurgents have been pressing ahead with an offensive that is putting pressure on the provincial capitals in the south and west of the country. Interior Ministry spokesman Mirwais Stanekzai said the blast happened in the Sherpur neighbourhood, which is in a deeply secure section of the capital known as the green zone. It is home to several senior government officials.

Stanekzai said it appeared the guesthouse of acting Defense Minister Bismillah Khan Mohammadi was targeted in the attack. His Jamiat-e-Islami party was told the minister was not in the guesthouse and his family had been safely evacuated. However, Mohammadi said in a tweet on Tuesday, “Do not worry, everything is fine!”

A party leader and former vice-president, Younus Qanooni, reassured the party in a message shared on social media that the minister and his family were safe. The defence ministry released a video in which Mohammadi says that his guards had been wounded in a suicide attack. “I assure my beloved countrymen that such attacks cannot have any impact on my willingness to defend my countrymen and my country,” he says.

Details of the attack were sketchy even as it ended but it appeared that gunmen had entered the area after the explosion. Stanekzai said all four attackers were eventually killed by security personnel and a clean-up operation was conducted by police. All roads leading to the minister’s house and guesthouse were closed, he said. 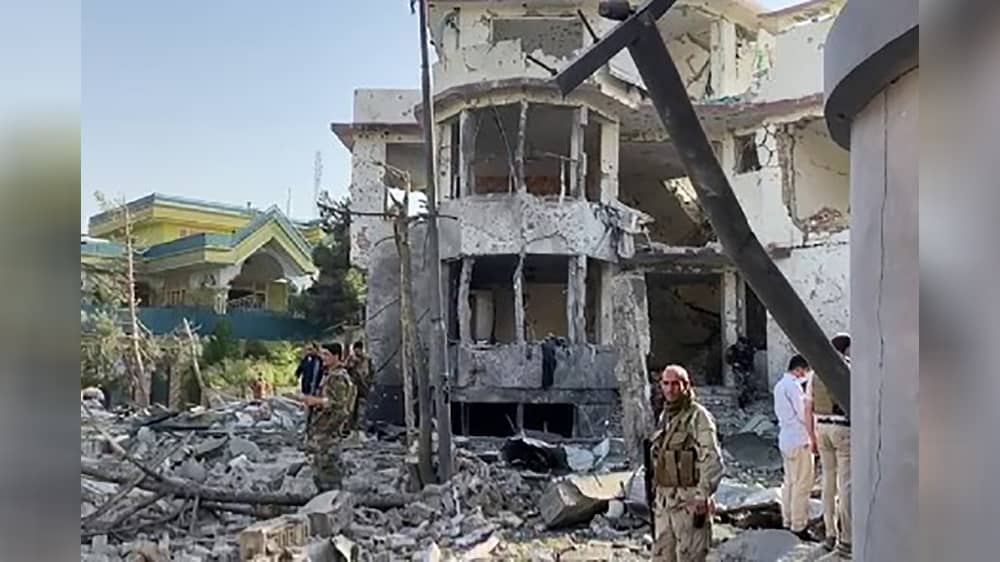 Hundreds of residents in the area were moved to safety, said Ferdaws Faramarz, spokesman for the Kabul police chief. He said security personnel had also carried out house-to-house searches. The wounded were taken to hospitals in the capital, said Health Ministry spokesman Dastgir Nazari. As per the Ministry of Interior, the attack began with a car bomb at 8pm on Tuesday, and continued until 11:43pm.

A security source said that two attackers entered a building near to the office of Azim Mohseni, an MP from Baghlan, in the neighborhood of Bismillah Mohammadi’s house following the attack. Mohseni confirmed that he was not in his office.

Tuesday was also the day when the anti-Taliban rallying calls, which were first chanted by people in Herat province on Monday night, spread to the Afghan capital Kabul, Khost, Nangarhar, and Kunar provinces. In Kabul, thousands of people took to the streets chanting ALLAH AKBAR (God is Great) to oppose the Taliban offensive and support the Afghan National Defense and Security Forces.

Vice-president Amrullah Saleh was among those who were chanting the slogans opposing the Taliban. While thousands were protesting on the streets in Kabul, thousands of others including women and children were supporting them from their rooftops. Kunar and Nangarhar provinces in eastern Afghanistan and Khost in southeastern also witnessed wide rallies. President Ghani on Tuesday said that the chants imply who is respecting the sacred call and who is fulfilling the commandments of Allah. He accused the Taliban of killing innocent Afghans.

The First Vice-President condemned the terrorist attack on the house of General Bismillah Mohammadi and said, “We are pleased that the Minister of National Defense and his family members were not harmed; but the lives and property of some of our compatriots have been severely affected. The Minister of National Defense reaffirmed that terrorists cannot weaken our will, and that the national defense and security forces, with the support of the people, will continue to fight resolutely, while Manzoor Pashteen, Founder & Head of Pashtun Tahafuz Movement, said, “Get silence out of the city with loud chants. Today, the sacred slogan of Allah_Akbar is used by Afghans for peace, life, construction and humanity, and to build a strong peaceful Afghanistan.”

US Secretary of State Antony Blinken said that he spoke with President Ashraf Ghani to reiterate the strong and enduring U.S. commitment to Afghanistan. We discussed the need to accelerate peace negotiations toward an inclusive political settlement that respects the rights of all Afghans, including women and girls. US State department spokesperson Ned Price added that both leaders condemned the ongoing Taliban attacks, which show little regard for human life and human rights, and deplored the loss of innocent Afghan lives and displacement of the civilian population.

This comes even as the United Nations Security Council also released a statement on the escalating violence in the country. “The members of the Security Council condemned in the strongest terms the deplorable attack against the United Nations compound in Herat. The members of the Security Council expressed their deep concern about the high levels of violence in Afghanistan following the Taliban’s military offensive, and called for an immediate reduction of violence. They also expressed deep concern about the number of reported serious human rights abuses and violations in communities affected by the ongoing armed conflict across the country. They recalled that all parties must respect their obligations under international humanitarian law in all circumstances, including those related to the protection of civilians.”

And with India holding the Presidency of UN Security Council this month, Indian External Affairs Minister S Jaishankar is travelling to New York on August 18-19 with key focus on Afghanistan. The key issue on the agenda will be UNSC role in the stability of Afghanistan with Pakistan supported Taliban trying to conquer the Islamic Republic through force while mouthing peace and negotiations to the international community. Despite initial confusion, the Taliban still resembles a heavily armed militia with medieval ideology and scant respect for minorities and women. Incidentally, Sunni Pashtuns comprises 30 per cent of population in Afghanistan and many among them oppose the barbaric practices of the insurgent force on innocent population.