Kabul: The Ministry of Education has announced that all schools in the country will be connected to the Internet. The ministry said in a statement on Tuesday that the acting Minister of Education, Rangina Hamidi, had discussed with Mansour Ansari, head of the Afghanistan Telecommunications Regulatory Authority or ATRA, how to connect schools to the Internet.

According to a statement from the Ministry of Education, the head of the Atra office said that the organization is ready to provide facilities for connecting schools to the Internet, and that the technical teams of both institutions would begin practical work on this issue.

Meanwhile, according to information received by Hashte Subh daily, the Taliban have banned the import of “TC-1 fuel” for airplanes. A document leaked to the daily shows that an official of the Taliban sent a letter to the Turkmen government urging it not to allow such fuel to enter Afghanistan through the Torghundi border customs in Herat. 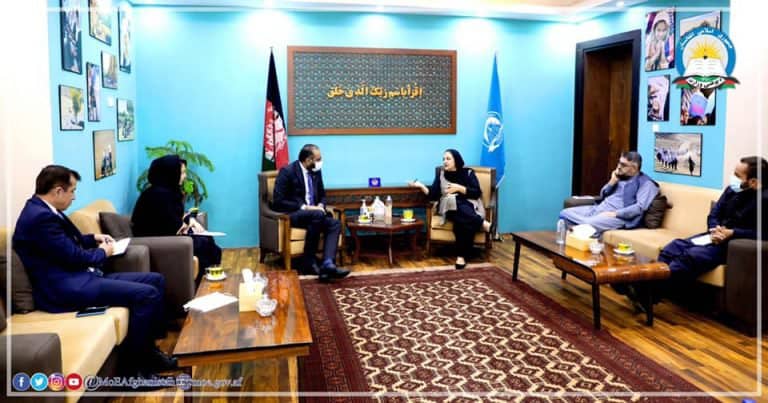 The document does not specify why the Taliban banned the import of aircraft fuel. The Taliban have confirmed the ban on the fuel, but have not commented on a document leaked to the daily. Meanwhile, an Afghan government official, who did not want to be named, said that the TC-1 fuel enters the country through the Hairatan border crossing and that there has been no problem in importing it so far. Fuel importers also say that jet fuel is not sold in the market, and that importers provide it to airlines on a contract basis.

Also, Kabul Municipality said that according to the sewerage department’s plan, towns and high-rise buildings should demolish their septic tanks and build sewage treatment plants. Speaking to Hashte Subh daily, Kabul Municipality spokeswoman Samira Rasa said that standardized wastewater treatment plants for high-rise buildings and towns have been designed by the Sewerage Department, and every high-rise and town is obliged to implement them.

She added that all high-rises and towns should demolish the septic tank and build a treatment plant instead. She stated that she has informed this issue to many high-ranking officials in different parts of Kabul city through inquiries. A spokesman for the Kabul municipality said that according to the design of the treatment plant, the wastewater is largely treated and can later be connected to ditches to avoid environmental odors. According to the municipality, 500 high-rise buildings in Kabul have set up their treatment plants. However, a number of Kabul residents say that some houses connect their sewage to the ditches inside the alley. Akbar is a resident of Kabul who has a shop in the PD6. There is a ravine in front of Akbar shop where dirt and rotten water are standing. He says the water is released from houses and high-rises buildings inside the ditches.

In other news, officials at the Ministry of Urban development and land said more than 17,000 land grabbers had been identified and that details of the usurpation and the amount of land seized by them had been recorded. The Ministry of Justice announced that the meeting of the Supreme Board of Government Cases was held on Tuesday. The meeting was chaired by Fazl Ahmad Manavi, Acting Minister of Justice.

According to the Ministry of Justice, a representative of the Ministry of Urban Development and Lands and a member of the Supreme Board of Government Cases at the meeting announced the identification of more than 17,000 land grabbers and said that the details of the usurpation and the amount of land seized by them. The Ministry of Justice said that the members of the board discussed the coordination between government departments to prevent the usurpation of public property, how to implement the provisions of the regulation on informal urban property, practical challenges in implementing the return of government cases and the board’s activities and meetings.

Fazl Ahmad Manawi said at the meeting that the Office of Presidential Affairs is expected to cooperate in this regard. According to him, the challenges should be addressed in the understanding between the departments, especially through the technical committee of the Supreme Board of Government Cases. The Minister of Justice says that although the country is in a critical situation; it is important to continue to provide services and not be affected by the current situation. On the other hand, in the meeting of the Supreme Board of Government Cases, the working schedule of the meetings and activities of this board and its technical committee has also been approved.