Kabul: Local sources in Balkh province said that one person was killed and ten others, including a soldier, were injured in an explosion near the Grand Blue mosque. Adel Shah Adel, a spokesman for the Balkh police, told Hashte Subh Daily that an explosion took place at noon on Thursday, on the Nazargah public road.

According to Adel, the explosion was caused by a mine embedded in a bicycle. He added that one civilian was killed and more than a dozen were injured in the blast, including a soldier. Ghawsuddin Anwari, director of the Mazar-e-Sharif Civil Hospital, said one person was killed and 15 others were taken to hospital. No one has yet claimed responsibility for the blast.

Meanwhile, in other news, Marshal Abdul Rashid Dostum, the leader of the National Islamic Movement Party, said that the conspiracy of the enemy is great and that in order to crush this conspiracy, all politicians need to come together and make a strong decision. Marshal Abdul Rashid Dostum arrived in Mazar-e-Sharif on Wednesday, via Hairatan, and arrived in Kabul last evening.

Dostum said in a meeting in Kabul that the Afghan people have thwarted the conspiracies of the enemy in the past and he hopes that they will be able to thwart them again. Dostum pointed out that Afghanistan is facing a big conspiracy and small plans cannot succeed. Marshall Dostum called on all politicians to come together to get out of the current situation and make a big decision. 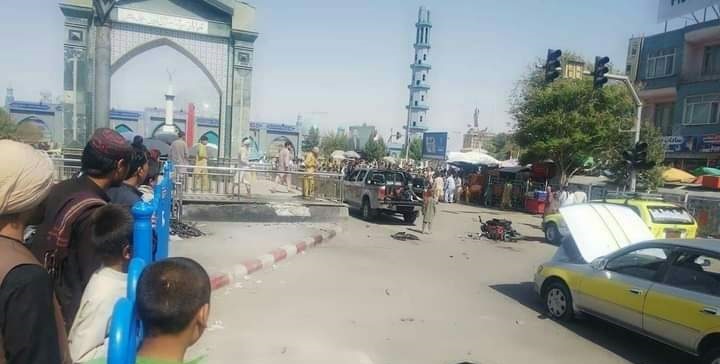 This comes even as President Ashraf Ghani met with Iranian President Ebrahim Raisi at the Presidential Palace of Iran in Tehran. The Presidential Palace announced that the meeting took place before noon on Thursday, and that both sides discussed the expansion of cooperation and relations between the two countries. The President of Iran has emphasized the continued support of the Government of Afghanistan and the efforts for a regional consensus for peace. He expressed his support for the people of Afghanistan to preserve the republic and its past achievements.

“We support a system in which the rights of all Afghans, including minorities, are protected, and our neighbors, especially Afghanistan, have a high position in our foreign policy,” said Raisi. President Ghani thanked Iran for its assistance and cooperation in various fields to Afghanistan and stressed the need for joint economic cooperation and the expansion of relations between the two countries.

According to the statement, Basir said at the inauguration of the e-mail system in the Ministry of Higher Education that the use of this system is mandatory for this ministry and its related units. He added that all officials in the ministry should use this system to play their role in providing speed, transparency and ease in the process of providing administrative services.

The Minister of Higher Education added, “We provide the necessary tools and equipment to all departments, if we do not use the e-mail system [in the Ministry of Higher Education], we will be held accountable according to the procedure.”

Meanwhile, Shukria Jamal, head of information technology at the Ministry of Higher Education, said the system generates emails for users with official position titles and digital signatures. He stressed that all directors, and general managers are obliged to use this “modern method of electronic correspondence” in the Ministry of Higher Education and its affiliated units.