Kabul: Head of Iran-Afghanistan Joint Chamber of Commerce has said exports from Iran to Afghanistan have declined more than 85 percent due to the increasing tensions in the country, the portal of Iran Chamber of Commerce, Industries, Mines and Agriculture (ICCIMA) reported on Friday. “With the escalation of the conflict in Afghanistan, the number of trucks carrying Iranian goods to this country has decreased from 100 trucks every day to two or three trucks per day,” Hossein Salimi said.

According to Salimi, Iranian exports to Afghanistan over the past two weeks have been only 15 percent of the figure for the same period in the previous year. “When turmoil or conflict arises in a country, the first area that will suffer is that country’s economy and trade,” he said, adding: “Unfortunately, the situation is so bad that at the moment it is not easy to predict what awaits us. We still do not have an accurate estimate of the amount of damage inflicted on Iranian traders. We have to see how long this situation will last.”

Underlining the probable decline in the two countries’ trade in case of the ongoing conflict, Salimi said: “If this situation continues for even another month, we will not reach 50 percent of our normal export volume to Afghanistan this year.” According to the official, Iran has targeted $2.7 billion of exports to Afghanistan in the current Iranian calendar year (started on March 21), but considering the current situation realizing this goal will not be possible. 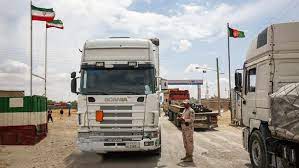 Road Transport Deputy of Sistan and Baluchestan province said that ‘Milak’ Border Terminal was shut down due to the insecurity in Afghanistan. Teymour Bagheri said, “In cooperation and collaboration with the executive organizations based at ‘Milak Border Terminal’ and in order to avoid any problems for economic activists, Iranian traders and businesspersons have been urged to refrain from exporting their transit cargo to Milak Border Terminal until further notice.”

In this regard, exit of Iranian and transit trucks towards Afghanistan will not be possible until further notice, he reiterated. Elsewhere in his remarks, he stipulated that Iranian trucks and commercial cargoes which are returning from Afghanistan to the Islamic Republic of Iran will be able to enter the country with the previous arrangements made in this respect.

While emphasizing the protection of national interests, he said, “We hope that this will not be a long-term issue and we hope that our trade with Afghanistan will not be interrupted, so that economic activists of the country would be able to continue their activity with peace of mind.”

It should be noted that Milak Border Terminal is located in the vicinity of Helmand city, neighborhood of Nimruz province of Afghanistan.

Meanwhile, the Taliban closed a key border crossing with Pakistan on Friday, saying no one would be allowed through until Islamabad dropped or relaxed its visa requirements for Afghans. The Taliban, wresting control of Afghanistan in the wake of a withdrawal of U.S. and other foreign troops, last month captured the southeast Chaman-Spin Boldak border crossing from Afghan forces. Pakistan initially closed its side of the crossing, landlocked Afghanistan’s second busiest entry point and main commercial artery to the sea, before reopening it last week.

“(The crossing) will remain closed for all types of commuting, including transit and trade, for both sides, and pedestrians, until the Pakistani side leaves the gate open, morning to evening, for Afghans holding [Pakistani issued] migration cards or [Afghan] ID cards,” the insurgent group’s shadow governor for Kandahar province said in the statement. Pakistani border officials at Chaman told Reuters the Taliban had placed concrete barriers to block the road on their side of the Friendship Gate, the crossing point between the two countries.