Kabul: Ajmal Omar Shinwari, spokesman for the security services, on Sunday said that in the past five days, 12 security forces had attacked Taliban positions in 25 provinces. He added that 1,177 Taliban insurgents had been killed and 651 wounded in 124 attacks since Wednesday last week.

According to Shinwari, the Taliban have lost control of the Aliabad in Kunduz, Yaftal in Badakhshan, Adraskan in Herat and Arghandab districts of Kandahar in the past four days. He added that the Taliban had killed four civilians, wounded six others and set fire to a school.

Ajmal Omar Shinwari said that the security forces are fully prepared to carry out offensive operations and clear areas that are facing a high threat or state of emergency; however, they delayed the operation due to the possibility of civilian casualties and public facilities. “The Taliban are using civilians and mosques as shields,” he added. “Therefore, we cannot carry out air and artillery attacks.”

Shinwari, meanwhile, noted that the Taliban group is incapable of fighting security forces, and that the group does not adhere to any principles of warfare and human rights by shielding civilians and homes. On the other hand, Shinwari denied the damage of the choppers in Kunduz, the claim that the Baghlan police chief cooperated with the Taliban and that the Taliban controlled 85% of Afghanistan’s territory.

Shinwari also said that Islam Qala customs in Herat province is under the control of the country’s security and defense forces. Shinwari also spoke about Sher Khan port in Kunduz province, saying that the port is not currently under the control of any party. Shinwari said Sher Khan port is currently a disputed area between security and defense forces and Taliban fighters. He said that efforts are being made to send more security forces to Sher khan port and secure the port as soon as possible without any casualties to civilians or the port facilities. Regarding the port of Hairatan, Shinwari said that all security problems in the port have been resolved. 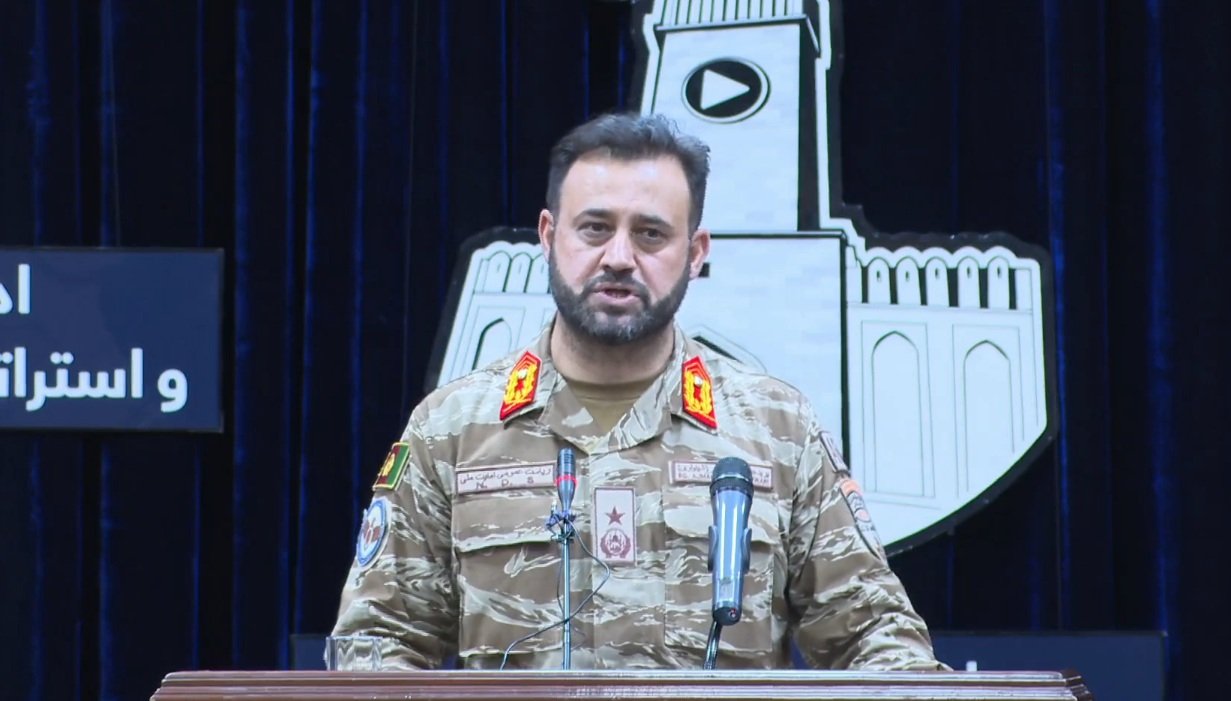 According to the statement, the delegation from Kabul met with Abdul Sabur Ghaneh, Governor of Herat, Kamran Alizai, Chairman of the Provincial Council, Khayal Nabi Ahmadzai, Commander of the 207th Zafar Corps, and senior security officials. It added that in this meeting, the governor of Herat expressed the security situation, ongoing plans and measures to gain the support of the center, and expressed satisfaction with the readiness and cooperation of the people and the Mujahideen for the suppression of the Taliban. The city of Herat has recently been besieged by the Taliban following the fall of several districts in Herat, and residents of the province are concerned about the security situation.

Meanwhile, hundreds of local residents, tribal elders, civil rights activists, youths, and religious scholars from across Laghman province gathered in Mehtarlam city, and announced their support for the republic system, provincial government, and ANDSF and praised their sacrifices. Provincial governor Abdul Wali Wahidzai, police chief Lutfullah Kamran, provincial NDS chief Shahid-ul-Haq Shahid also participated in the gathering. Participants described the ANDSF as the main protectors of the people, stated that those who facilitate the evacuation of outposts to the Taliban are traitors and should be prosecuted, and vowed to support them in the fight against the Taliban.

Governor Wahidzai appreciated their support, said that the people of Laghman have always defended their land and system throughout the history, and it’s time to stand by the ANDSF against the enemy. Wahidzai added that clerics around the world have called the Taliban war as illegitimate, but the group continues killing Afghans, and ignores all Islamic and national values; however, the ANDSF will clear the lost areas in accordance with strategic plans. Wahidzai called on the people to fulfill their Islamic and national responsibilities, and increase cooperation with the ANDSF and provincial government in order to improve the security situation in the province.

On the other hand, Second Vice-President Mohammad Sarwar Danesh chaired the meeting of the Joint Committee of Government and Media on Sunday, hoping that the committee, media community, and journalists will be able to fulfill their responsibilities in this sensitive situation. Deputy Committee Head Zia Bumia reported an increase in threats against journalists across the country, amid an increase in fighting, and that media activists and journalists expect that the Committee implement serious measures in this regard. The Ministry of Information and Culture reported that a number of journalists and media activists have been detained by the Taliban in some areas, and the group is cracking down the media and journalists.

Committee members made necessary decisions about the protection and safety of journalists facing the threats, and that provincial committees of the Committee take precautionary measures wherever journalists are at risk and threatened. It was also decided that in the event of a serious threat and the lack of facilities in the provinces, journalists at risk should be transferred to safety after necessary assessment and in coordination with relevant agencies. Danesh assured international media journalists that security agencies will cooperate to provide information from battlegrounds.

Also, President Ashraf Ghani has approved the proposal of the Afghan Electricity Company (Breshna) to transfer 22 diesel generator bases from Bagram military base to Nangarhar province. Sangar Niazi, a spokesman for Breshna, told the Etilaat roz daily on Sunday that ownership of the generators has now been transferred to Breshna based on the company’s proposal and approval by Ghani from the Ministry of Defense and the Presidential Office of Operations and National Development Support.

Niazi added that these 22 of Bagram airfield diesel generators will be transferred to Nangarhar province soon. He stressed that Breshna had proposed transferring them to the Nangarhar area due to a lack of electricity in the area, and that President Ghani had approved it. This area includes Nangarhar, Laghman, Kunar and Nuristan provinces. A version of the proposal, endorsed by a Breshna spokesman, also states that the 22 generators will generate a total capacity of 10.69 megawatts of electricity.