Mohammadi said that security and defense forces, especially the air force, had carried out numerous attacks on Taliban positions in recent weeks, inflicting heavy casualties on the group. Acting Minister of National Defense pledged to the army forces to take special care of their problems and shortcomings. The Air Force is one of the best equipped units in the country.

The Pentagon has recently announced that it will provide more fighter jets and technical and logistical assistance to the Afghan Air Force.

Meanwhile, Nangarhar’s Provincial Governor Zia-ul-Haq Amarkhel led a high-level delegation and visited frontlines, and praised the sacrifices made by the ANDSF. Provincial Governor’s Spokesman Attaullah Khogyani said that the ANDSF in Khogyani district have repelled 51 Taliban attacks, over the past three months. Amarkhel emphasized on defeating the Taliban and assured them of full cooperation. According to local officials, the ANDSF operation is successfully ongoing across several of districts in the province, and along with inflicting heavy casualties to the Taliban, they also cleared a number of villages.

In other news, security officials in Kapisa province reported that a madrassa principal, Mawlawi Hazrat-uddin has been assassinated by unidentified motorcyclists in Hesa Duwum Kohistan district. Provincial Police Spokesman Shayeq Shoresh said that the Mawlawi was the principal of Kalota girl’s madrassa, who was assassinated on the way home at 11:20 am on Sunday. Shoresh added that the perpetrators fled after the incident; however, efforts have started to capture them.

Also, the Ministry of Interior (MoI) reported that three terrorists, who wanted to detonate a culvert in Qalandar district, Khost province, fell victim to their own improvised explosive device (IED), and were killed. The MoI added that the Taliban have no plan to develop and improve Afghanistan, except bloodshed and destruction of public facilities. 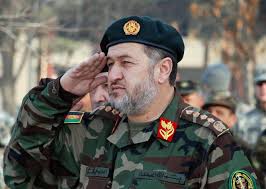 Meanwhile, Turkmenistan has begun moving heavy weaponry, helicopters, and other aircraft closer to its border with Afghanistan, and reservists are being put on alert in the capital, a further sign of the worry spreading across Central Asia as Taliban fighters continue major offensives. A senior official at a Turkmen security agency told RFE/RL that more troops from an army garrison near the city of Mary are being sent to bolster border guard units. Mary is about 400 kilometers north of Serhetabad, a major border crossing with Afghanistan. The official, who was not authorized to speak to the media, said additional forces sent to the border include officers as well as fighter jets and helicopters. It is unclear exactly how many units are being sent to the border or the numbers of aircraft being dispatched there.

On the other hand, the Indian Ministry of External Affairs on Sunday said that safety of Indian personnel is paramount after India evacuated staff posted in its consulate in Kandahar in view of the deteriorating security situation in Afghanistan. “India is closely monitoring the evolving security situation in Afghanistan. The safety and security of our personnel is paramount,” the Indian foreign ministry has said in a statement.

“The Consulate General of India in Kandahar has not been closed. However, due to the intense fighting near Kandahar city, India-based personnel have been brought back for the time being,” MEA spokesperson Arindam Bagchi said in a statement. He also emphasized, “this is a purely temporary measure until the situation stabilizes. The Consulate continues to operate through our local staff members.”