Kabul: Afghan President Ashraf Ghani announced on Tuesday that he will be combining the special forces unit along with 777th special brigade of the Afghan air force. At the height of the clashes, the Afghan president expressed confidence that the air force would change the course of the war and provide the necessary stability.

President Ashraf Ghani raised this issue on Monday evening in a conversation with some pilots of the Air Force Special Brigade. A video of the conversation was posted on the official Facebook page of the Presidential Palace. Ghani said, “The 777th Brigade will remain absolutely special, as your name is Diamond, special attention will be paid to you, and at the same time, you will be drawn from other tasks, you will be qualified for night operations.”

Afghan defense officials say airstrikes in recent weeks have inflicted heavy casualties on the Taliban. President Ghani announced the reversal of the war by the air force, which reported the intensity of insecurity in various provinces.

Also, Abdullah Abdullah, chairman of Afghanistan’s High Council for National Reconciliation, said that the Taliban cannot win militarily. He emphasized that the Taliban could not impose their will on the people: “They cannot impose their will on the people militarily. Some people agree with their views, but there are many who do not accept them. Or impose 35 million people, but that will not happen.”

Also, local officials in Takhar province reported that the Taliban conducted attacks against Shorab and Srai Sang areas of Taloqan on Monday night, which faced fierce resistance by the ANDSF and people’s forces. The provincial police stated that 15 Taliban insurgents were killed and 20 others were wounded during the clashes, and assured that the ANDSF and people’s forces are fighting the Taliban across the city with high morale and complete coordination.

The 217th Pamir Corps too reported that the Taliban conducted attacks against ANDSF outposts in Kuran wa Munjan district in Badakhshan province from several directions on Tuesday morning, which faced fierce resistance from the ANDSF. The Corps added that 32 Taliban insurgents were killed and 14 others were wounded in counterattack by the ANDSF. Additionally, four Taliban vehicles, and a number of weapons and ammunition were destroyed during the attack.

However, local sources in Bamyan province told Radio Azadi that the ANDSF tactically retreated from Kahmard district. Several local residents confirmed that district officials evacuated the center without any clashes, and a number of locals have raised Taliban flag in the district headquarters. Etilaat roz Daily quoted Deputy Head of Bamyan’s provincial council, Abdul Ahmad Benawa as saying that Saighan district fell to the Taliban on Tuesday morning. Benawa added that the ANDSF evacuated the district, after several hours of clashes. Provincial Police Spokesman Humayun Elkhani confirmed that the ANDSF have evacuated Kahmard and Saighan districts, due to their ineffective presence there. 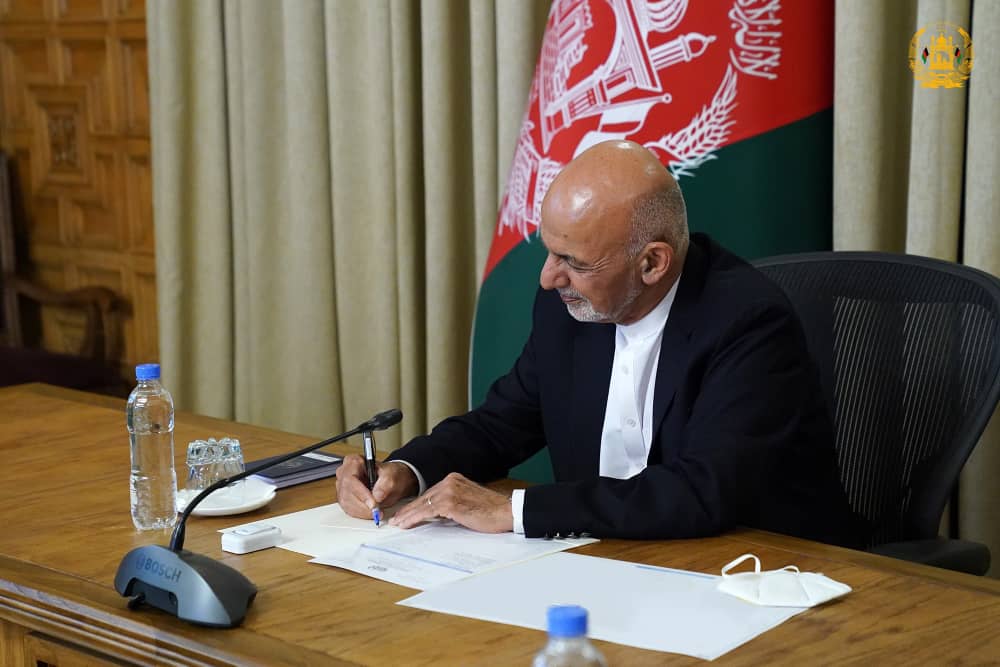 Also, Kabul police confirmed that three security personnel were killed by unidentified gunmen in Bagrami district of Kabul. Kabul police spokesman Ferdaws Faramarz said the incident took place at 8:05am on Tuesday, in the Hussein Khel area of Bagrami district. No individual or group has claimed responsibility for this incident. The Kabul police spokesman said an investigation had been launched into the incident. A few days ago, a security force personnel was assassinated in the PD8 of Kabul.

In other news, the closure of the Islam Qala, Abu Nasr Farahi, Ai-Khanoum, Sher Khan Bandar and Dand-e Patan crossings in Herat, Farah, Takhar, Kunduz, Kandahar and Paktia provinces has worried the government, the private sector and the people of the country. The Ministry of Finance, the Ministry of Economy, the Ministry of Agriculture, Irrigation and Livestock, the Ministry of Industry and Trade and representatives of the private sector have drawn up a plan in the latest action that provides alternative options for exporting and importing commercial goods.

Ahmad Fawad Ahmadi, a spokesman for the Ministry of Industry and Trade, said the ministries and the private sector had drawn up a plan and will submit it to the presidency soon. According to this plan, air corridors will be used for the export and import of commercial goods. Ahmadi added that they would also use strategic reserves. According to Akbar Rostami, spokesman for the Ministry of Agriculture, there are currently more than 75,000 tons of wheat in strategic reserves.

“Coordination with the Ministries of Interior and Defense may soon launch a special operation to retake areas that threaten our imports and exports,” the spokesman for the Ministry of Commerce added. Food and fuel hoarding by a number of profiteers is another problem that causes prices to rise in the market. Ahmad Fawad Ahmadi said that those who hoard food and fuel will be dealt with according to the law. “There is a consumer protection commission in the market, and those who hoard food and fuel are dealt with legally,” he said.

Meanwhile, representatives of the private sector said at the meeting that they were reaching an agreement with the Taliban and importing their trade goods through these crossings. According to Ahmad Fawad Ahmadi, representatives of government departments have told them to refrain from exporting and importing through these ports until the Taliban’s threats are eliminated, so that their goods are not burnt in possible violence.

On the other hand, acting Interior Minister Abdul Sattar Mirzakwal met with British Ambassador Laurie Bristow on Monday afternoon, to discuss comprehensive cooperation in counterterrorism issues. Mirzakwal appreciated UK’s assistance and cooperation and said that the ANDSF, especially ANP, are capable to protect and defend their homeland and will not allow any terrorist group to disrupt order. Bristow said that support and strengthening of the ANDSF is the only proper option to thwart any possible terrorist threats and his country is committed to supporting and cooperating with these forces, particularly the ANP.

The British Ambassador also met Foreign Minister Mohammad Hanif Atmar and discussed strengthening bilateral relations and cooperation. Bristow emphasized on the importance of preserving joint achievements of the past two decades, particularly women’s and children’s rights, and the rights of the minorities, and freedom of speech, and assured Atmar of his country’s continued support to protect these achievements within the new chapter of relations between Afghanistan and the international community. Atmar appreciated UK’s cooperation and sacrifices made by British troops within NATO-led mission in Afghanistan. Pointing to Taliban’s increase in violence, Atmar highlighted the important role of UK in strengthening regional and international consensus for the success of the peace process, and emphasized on international cooperation to strengthen and equip the ANDSF following the foreign troop withdrawal.

Meanwhile, Deputy Foreign Minister Mirwais Nab met with Deputy Tajik Foreign Minister Khusrav Noziri to discuss political and security developments, and bilateral relations. Nab welcomed Tajikistan’s active role in support of the Afghan peace process, warned that an increase in Taliban violence is not only a serious threat to Afghanistan, but also to the region, and stated that the ANDSF are fighting terrorism on the frontlines, despite logistical and equipment limitations. Nab added that combating terrorism requires additional cooperation and coordination from regional country, through multilateral mechanisms.

Noziri described the current security situation in Afghanistan as worrying for Tajikistan and the region, and said that the killing of civilians and the current war in Afghanistan is against human rights laws and Islamic values. Both sides stressed that the Shanghai Cooperation Organization (SCO), which works to combat terrorism and extremism in the region, is a good mechanism to address the security situation in Afghanistan. They also discussed preparations and action plan for the 4th meeting of the Afghanistan-SCO Contact Group. Additionally, Nab met with Tajik Transport Minister Azim Ibrohim, and discussed bilateral economic-trade, and transport relations and emphasized on the development of trade volume of goods between the two countries. Both sides also exchanged views on the Joint Commission on Trade and Economic Cooperation, and stressed the need to start its work as soon as possible.

Also, Deputy Spokesman for the Ministry of Foreign Affairs, Hamid Tahzib, told Radio Azadi that the 4th Afghanistan-SCO Contact Group meeting will kick off in Dushanbe, Tajikistan, on Tuesday, to discuss Afghanistan’s full membership in the SCO, the organization’s cooperation with Afghanistan in the joint fight against terrorism and extremism, the current situation of Afghanistan and its impacts on the security and welfare of the region. Foreign Minister Mohammad Hanif Atmar is expected to attend the two-day meeting.