Kabul: Deputy Spokesman for the Ministry of Defense Fawad Aman stated that the ANDSF have cleared Qala-e Naw city, Badghis province, of insurgents who sustained heavy casualties. Aman added that the clearance operation is ongoing in other parts.

However, Ghazni’s provincial council member Fatima Rahimi told BBC that Malistan district fell to the Taliban on Monday afternoon, whilst the ANDSF had left the district before noon, after three days of clashes. Rahimi added that the Taliban entered the district through the neighboring Uruzgan province. Currently, the government controls only Jaghori and Nawur districts from 18 provincial districts in Ghazni province as per Hashte Subh daily reports.

Hasht-e Sobh Daily quoted district governor Amir Mohammad Jawed that the district was temporarily evacuated after the fall of two security outposts. Additionally, Jawed said that there was not adequate personnel and ammunition. He said several people had been killed and wounded as a result of Taliban attacks. Civilian casualties have also been reported as a result of Taliban attacks.

Meanwhile, hundreds of women in Jowzjan announced their support for the ANDSF on Tuesday morning. Provincial governor’s office stated that these women emphasized that they will not return to the dark past, and if peace is not achieved, they’re prepared to defend the country along with the ANDSF. 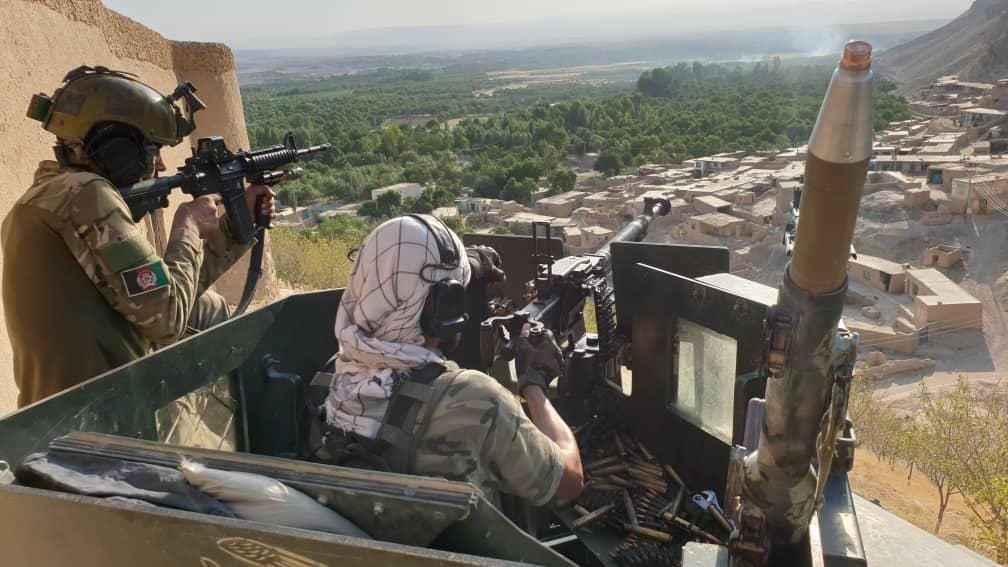 This comes even as President Ashraf Ghani chaired a senior security meeting in Balkh governor’s office and issued necessary directives to improve the security situation in Balkh and neighboring provinces.

Ghani added that international commitments are in place to finance and equip the ANDSF and local officials have the full support from the government leadership. Security officials assured that they are prepared for any sacrifices with the support from the people and thwart enemy conspiracies.

Karzai told reporters that serious peace talks will begin soon and asked the people to be patient. At the same time, he stated that he hoped that the United States would work to establish friendship, that peace be established in Afghanistan, that national sovereignty be restored, and that Afghans live with dignity. Addressing the Taliban, Karzai said, “We worked very hard to build a national army and a national police force, and from nothing, we created a system for the country. We must preserve our government institutions in any way possible and move towards peace as soon as possible.”

However, he stressed that Afghanistan is a victim of the policy of using extremism by major world powers. According to him, the explosion in the school of Sayyid al-Shuhada and the ISIS group is the result of this policy. “We hoped that this policy would change and that the great powers would not use the tools of extremism against each other; unfortunately, this process is still ongoing.”

Karzai called on the government and the Taliban not to miss the opportunity for peace and to save the country. The former president did not explicitly state his position on the formation of the popular uprising, but said he did not approve of either side waging the war. Hamid Karzai expressed optimism about the peace process and announced the start of serious talks in the near future.