Kabul: Kabul’s provincial police reported the arrest of an individual in PD7 for cooperating with the Taliban.

Provincial Police Spokesman Firdaws Faramarz stated that the individual was arrested during a targeted operation conducted by the Special Police Unit. Faramarz added that a pistol along with ammunition and equipment, used in IED making, were also confiscated.

Also, Kabul’s provincial police reported that a Taliban member, named Ajab Khan, was arrested with two magnetic IEDs, six IED remotes, and a silencer pistol in Golayee Dasha area of PD12 last night. An investigation is underway into the case, it added.

Meanwhile, the Taliban have abducted a member of Khost’s provincial council, Zohra Jalal, along with five family members. One of Jalal’s son, Ayub Jalal, told VOA that based on initial information, the Taliban have taken her family members to Zarghun Shahr area of Mohammad Agha district, Logar province. Khost’s provincial council head Kafil Raihan said that Jalal along with his four sons and a daughter were on their way to Kabul, and the Taliban abducted them near Pul-e Alam city, Logar province, before noon on Tuesday. Spokesman for Logar’s Provincial Governor, Didar Lawang, said that the security agencies have yet to receive a report about the issue. The Taliban have not commented on the incident yet.

Also, Takhar’s provincial governor’s office reported that Taliban’s shadow governor for the province, Mawlawi Nooruddin, along with the group’s shadow governor for Dashti Qala district, Shaikh Naser, have been seriously wounded during an airstrike in Konjak-e Srai Sang area of Taloqan city. Then, he succumbed to his injures, Ministry of Defense spokesperson Fawad Aman said.

Also, Hasibaullah Massoud, commander of the army brigade in Badghis province, warned drivers of high-speed vehicles that they would set their vehicles on fire if they provoked soldiers to leave their jobs. Massoud told the Etilaat roz on Tuesday that some drivers, as well as residents of Qala-e-Naw, the center of Badghis, were asking soldiers to leave their ranks by providing temporary accommodation for them. He added that drivers who try to provoke government troops to leave their posts and transfer them will have their vehicle details registered in Herat and Badghis and then dealt with legally. “I warn all drivers who transfer troops from Qala-e-Naw to Herat without coordination and incite soldiers to leave,” he said. Earlier, Badghis Governor Hesamuddin Shams had said that some influential people and elders were going to government checkpoints and camps and asking them to leave their checkpoints.

Also, Kabul’s provincial police reported that an improvised explosive device (IED), which was planted along the road in Kobaki area of Paghman district, was detected and detonated in a non-residential area, before noon on Tuesday. Police Spokesman Firdaws Faramars said that IEDs mostly result in civilian casualties.

Also, President Ghani met with former Balkh’s Provincial Governor Atta Mohammad Noor at the provincial governor’s office, and offered condolences on the recent death of Noor’s brother. Both sides also discussed the current situation and the need for national consensus and support for the ANDSF, as per the Presidential Palace’s statement.

In other news, addressing a press conference at the Government Media and Information Center (GMIC), Kabul’s Provincial Governor Mohamamd Yaqoob Haidari said that 807 development projects had been planned for the province, during the 1400 fiscal year, 336 of which have been completed.

Haidari added that about half of the 600 projects from the Ministry of Rural Rehabilitation and Development (MRRD), including road and school constructions, have been implemented, and 39 projects in the agriculture sector, including raison houses, distribution of wheat seed, establishment of orchards and storages, have been completed, and 132 other projects are underway.

Haidari reported that alongside 132 schools being built by the MRRD, six schools have been built by the National Development Corporation, and work is ongoing on renovating 18 school buildings and fencing financed by the provincial budget.

Haidari appreciated people’s mobilization in the province to defend their areas against the enemy, and added that efforts are ongoing to organize these individuals within local companies, to enable them alongside the ANDSF to regularly fight the enemy.

Parwan’s Provincial Governor Fazluddin Ayar also addressed the GMIC through videoconference and assured about an improve in security of the province, and added that an operation to recapture the lost areas from the enemy will begin with the mobilization of the ANDSF and people’s forces.

Ayar added that between 500-600 “traitors” have been arrested and referred to the security agencies in the province over the past three months, and that the provincial government is normally operating and development projects are being implemented. Ayar emphasized the local residents of the province, including elders, youths, and clerics are supporting the system with unity. 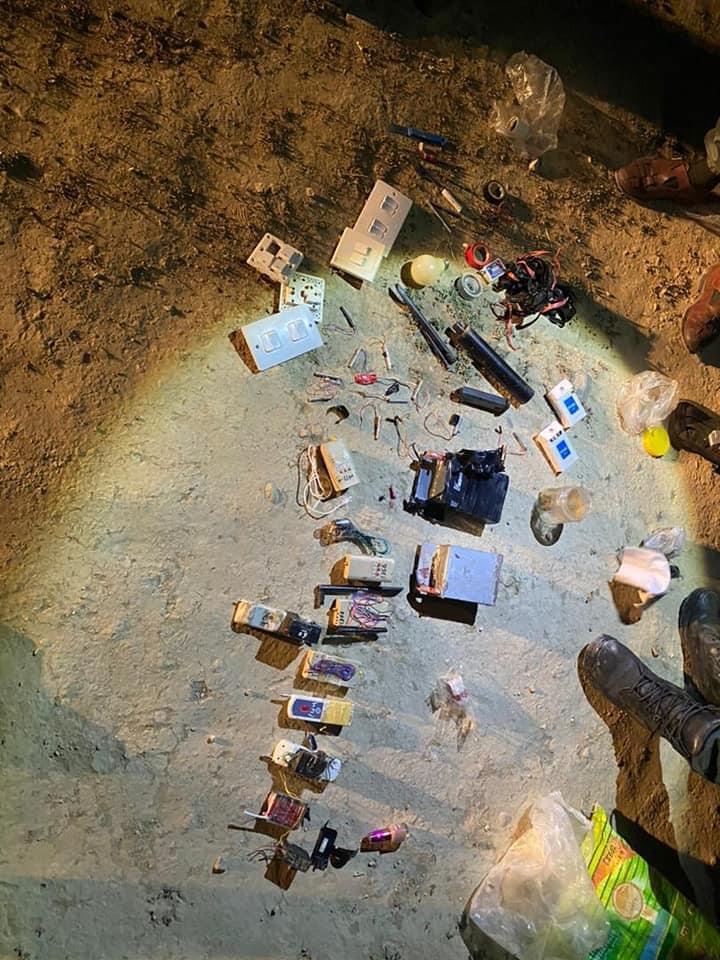 Meanwhile, UNHCR, the UN Refugee Agency, is warning of a looming humanitarian crisis in Afghanistan as the escalating conflict brings increased human suffering and civilian displacement. An estimated 270,000 Afghans have been newly displaced inside the country since January 2021 – primarily due to insecurity and violence – bringing the total uprooted population to over 3.5 million, as per UNHCR.

The number of civilian casualties has risen 29 per cent during the first quarter of this year compared to 2020, according to UN Assistance Mission in Afghanistan. An increasing proportion of women and children were among those targeted, it stated. UNHCR and partners, as part of a coordinated response, are assisting newly displaced Afghans with emergency shelter, food, health, water and sanitation support and cash assistance, despite challenges in accessing vulnerable groups.

UNHCR urged the international community to step up support to the Afghan Government and people of Afghanistan and its neighbors at this critical moment. It stated that humanitarian resources are currently falling dramatically short. UNHCR’s financial appeal for the Afghanistan situation (including operations for Afghan refugees in Pakistan and Iran) remains acutely underfunded, at only 43 per cent of a total US$ 337 million required.

Also, the fighting in Afghanistan as NATO forces withdraw is having a grave effect on civilians, the EU’s foreign policy chief said. Josep Borrell said the number of civilian casualties was up by nearly a quarter compared to earlier in the year, with more attacks against the ethnic minority Hazaras.

EU foreign ministers held talks on Afghanistan on Monday, when they urged the Taliban to sit down at the negotiating table and discuss an end to the fighting. “The fighting is having a grave impact on civilians,” said Borrell at a press conference in Brussels. “The ministers have unanimously urged the Taliban to engage in substantive and conclusive peace negotiations.

Borrell said that civilian casualties in Afghanistan had risen 23 percent in the first quarter of this year. In addition, Borrell called on countries in the region and the world to play a constructive role in supporting the Afghan peace process. According to the EU foreign policy chief, he is scheduled to attend a meeting in the Uzbek capital Tashkent in the coming days. Borrell said he would attend the meeting to meet with regional actors on Afghanistan and also expected Afghan President Mohammad Ashraf Ghani to attend. US Special Representative Zalmai Khalilzad will also attend the meeting.

“We also call on countries in the region and the broader international community to play a constructive role in support of the Afghanistan peace process,” he said. The deteriorating security situation in Afghanistan prompted its government to urge European countries not to deport any more Afghan migrants.

Also, Nangarhar’s Provincial Governor Zia-ul-Haq Amarkhel met with the visiting UN Secretary General’s Deputy Special Representative for Afghanistan Ramiz Alakbarov and called for provision of humanitarian assistance to those affected by the recent fighting and cooperation in the fight against COVID-19. Amakhel provided information about the security situation, those displaced, returnees, problems within the health sector, and thanked the UN agencies for coordinating issues with the provincial government, but called for more assistance and attention in these areas.

Amarkhel added that the Taliban will never gain power through fighting, and emphasized that the UN should put pressure on the Taliban and Pakistan to sit at the negotiating table, to prevent the destruction of public infrastructure and killing of Afghans. Alakbarov said that the UN will never remain indifferent towards human rights abuses, and will continue to fight for education and health, and assured that it will continue its support and cooperation with the Afghan people. Alakbarov added that various UN agencies are currently working on health, education, refugees, and other areas in Nangarhar province and will continue their assistance and cooperation.

Un Deputy Special Representative Resident and Humantarian Coordinator for Afghanistan Ramiz Alakbarov also told Sputnik, “We continue our work in Afghanistan, but military action does not help to ensure uninterruoted delivery of supplies and smooth operations. Nevertheless, international NGOs and the UN continue to be present there and provide assistance.” He added, “In the first half of 2021, 25 humantarian workers were killed, 63 were injured and 83 were arrested. In the first six months, we had 1,120 incidents related to humantarian access, while in 2020, there were only 1,095 such incidents.”

In other news, Ulemas, women and youth representatives came together to speak with one voice in support of peace efforts in a series of UN-sponsored radio programs broadcast in the southern provinces of Uruzgan and Zabul. “Youth participation is very important in the peace process because they have energy and potential to broker a peace deal acceptable to all,” a local peace activist and civil society representative in Uruzgan, Gran Hewad, told listeners.

Participants also discussed their roles in building a culture of peace, and in preventing and resolving local conflicts. Mullah Mohammad Yaqoob Sabiri, head of the public awareness section at the Pilgrimage Department in Zabul, in another program, highlighted the role of Ulemas in raising awareness concerning a peaceful settlement to the conflict. “Peace is central to Islam and therefore it is vital to convey this message to parties and those fighting on the frontlines,” he said.

Other participants echoed the importance of freedom of expression, human rights, access to education, health, work, movement, assembly, and demonstration and other basic rights should be protected and preserved. They also listed women’s rights as an important and something that must be protected. The ten radio programmes are estimated to reach around half a million listeners both in Uruzgan and Zabul provinces.

In fact, in view of the worsening security situation in Afghanistan, Finland is suspending deportations to the country for the time being. The Finnish Immigration Service announced on Monday that the “issuing of negative notices” for Afghan citizens had been suspended on Friday. A spokesperson from the Finnish Immigration Service said that suspending deportations did not mean that those affected would automatically receive permanent residence permits, but decisions on their applications would be postponed. The government has not set an end date for the suspension.