Kabul: Minister of Foreign Affairs of the Islamic Republic of Afghanistan Mohammad Haneef Atmar met, on the sidelines of the fourth meeting of the Afghanistan Contact Group within the framework of Shanghai Cooperation Organization, with Indian Minister of External Affairs Subrahmanyam Jaishankar to discuss political and security situation, peace process, and India’s cooperation with Afghanistan in various fields, including the joint fight against terrorism and the establishment of lasting peace and stability in Afghanistan and the region.

Minister Atmar elaborated on the political and security situation in Afghanistan, the outcome of Afghan President’s visit to Washington DC, and the United States’ continued support and cooperation with Afghanistan. Referring to the escalation of the Taliban attacks in collusion with foreign fighters and regional and international terrorist networks against civilians and the Afghan defense forces, Minister Atmar said overcoming this common threat was of vital importance to regional security.

Minister Atmar underscored the constructive role of India in strengthening regional consensus on the Afghan peace process and the preservation of the achievements of the last two decades. Expressing concern over the escalation of violence and stressing the need to end the bloodshed in Afghanistan, Jaishankar assured Atmar of India’s continued cooperation in strengthening regional and global consensus to achieve a political settlement in Afghanistan.

Jaishankar on Tuesday met his Uzbek counterpart Abdulaziz Kamilov in Dushanbe and discussed connectivity, bilateral ties and the situation in war-torn Afghanistan. “Met FM Kamilov of Uzbekistan today. Discussed connectivity, bilateral ties and the Afghanistan situation. Look forward to attending the Tashkent Connectivity Conference,” tweeted S Jaishankar. Jaishankar, who arrived in the Tajikistan capital, is on a two-day visit to attend the meetings of the Shanghai Cooperation Organization (SCO) Council of Foreign Ministers and the SCO Contact Group on Afghanistan that will meet on July 14 with the participation of the Afghanistan government. He was invited by Tajikistan Foreign Minister Sirojiddin Muhriddin, to take part in the meeting of the SCO Council of Foreign Ministers on July 13-14. After attending the meetings in Tajikistan, Jaishankar will travel to Uzbekistan to attend the Tashkent Connectivity Conference. 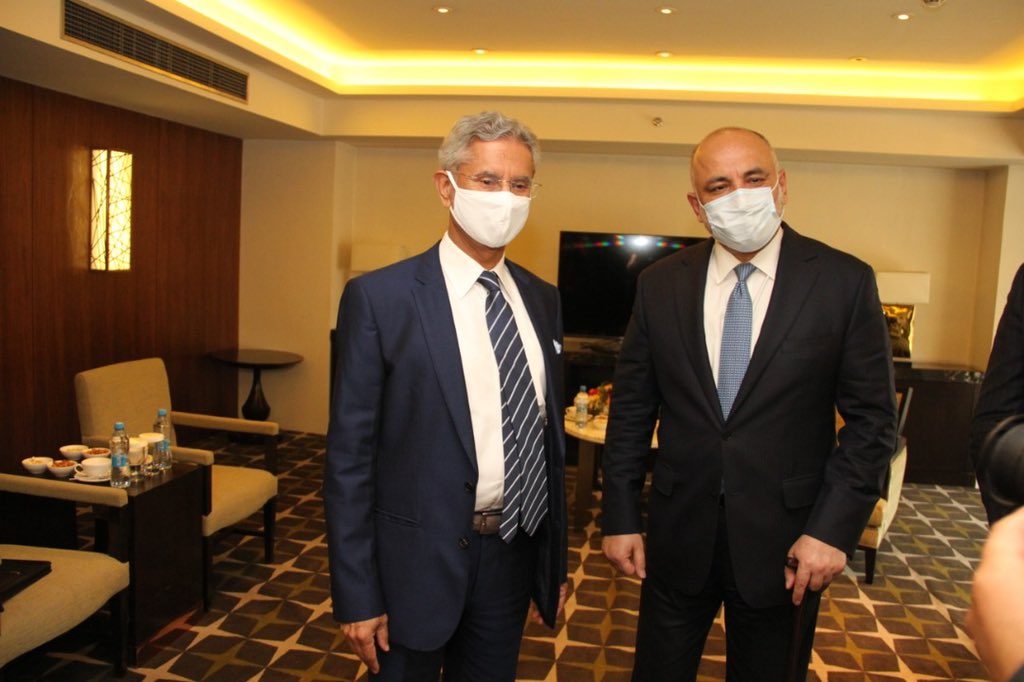 Meanwhile, Atmar also met with Uzbek Foreign Minister Abdulaziz Kamilov on the sidelines of the 4th Afghanistan-Shanghai Cooperation Organization’s meeting in Dushanbe, Tajikistan. Both sides discussed the agenda, level of participation, and preparations for the “Central Asia and South Asia: Regional Interconnectivity, Challenges, and Opportunities” scheduled for 15-16 July in Tashkent, Uzbekistan, and spoke about the plan to establish quadripartite cooperation framework between Afghanistan, Uzbekistan, Pakistan, and the U.S., to expand economic ties between Central Asia and South Asia. Additionally, both sides stressed the need to address the challenges of the peace process and expand practical cooperation in three areas of peace, security, and economic cooperation, including the implementation of the Uzbekistan-Afghanistan-Pakistan railway project.

Atmar met with Pakistani Foreign Minister Shah Mahmood Qureshi too in Dushanbe, to discuss strengthening regional cooperation over the success of the Afghan peace process, Pakistan’s practical cooperation with Afghanistan in the joint fight against terrorism, and ensuring lasting peace and stability in the country and region. Atmar spoke about the latest political and security developments in Afghanistan, emphasized on the importance of strengthening regional cooperation alongside support and cooperation from the international community to Afghanistan for the success of the peace process, called the presence of foreign fighters and regional and international terrorist networks alongside the Taliban in Afghanistan a great threat to the region and the world, and emphasized on the practical regional cooperation, particularly Pakistan, in closing Taliban sanctuaries and funding sources, encouraging the group to resume meaningful negotiations and find a political solution for the success of the peace process in Afghanistan. Qureshi described Afghanistan’s instability as regional instability and assured Atmar of his country’s continued support for a stable Afghanistan. Qureshi emphasized on the importance of reducing violence and establishment of a ceasefire in Afghanistan and reiterated Pakistan’s commitment to working to persuade the Taliban to negotiate and find a political solution.

Also, Britain said that it will work with the Taliban should they enter the government in Afghanistan, as per British Defence Minister Ben Wallace. Wallace told the Daily Telegraph in an interview, “Whatever the government of the day is, provided it adheres to certain international norms, the UK government will engage with it.”

Even Chinese State Councilor and Foreign Minister Wang Yi on Tuesday urged the Taliban to make a clean break with all terrorist forces and return to the mainstream of Afghan politics. Wang made the remarks during a joint press conference with Tajik Foreign Minister Sirojiddin Muhriddin following their talks in Dushanbe. As a major military force in Afghanistan, the Taliban should realize the responsibilities it bears for the nation, Wang said. The Afghan government has done a lot of work to safeguard the unification of the country, maintain social stability and improve the people’s livelihood over the past years, he added.

However, due to the deteriorating security situation, France on Tuesday called on all its citizens in Afghanistan to leave the country as the Taliban pressed ahead with a major offensive amid the withdrawal of foreign troops. “The government will set up a special flight on the morning of July 17, departing from Kabul, in order to allow the return to France of the entire French community,” the French embassy in Kabul announced in a statement, adding that no payment would be necessary to board the plane.

“The Embassy of France formally recommends to all French citizens to take this special flight or to leave the country immediately by their own means”, the communiqué continued. The embassy said it would not be able to ensure the safe departure of citizens choosing to stay beyond July 17.

Even, the Canada embassy in Afghanistan released a statement on Wednesday warning all Canadians to avoid all travel to Afghanistan due to the unstable security situation, ongoing insurgency, terrorist attacks, risk of kidnapping and high crime rate. The statement added that if Canadians are already there, they should leave as the ability of the embassy of Canada to Afghanistan to provide consular and other support is very limited throughout the country. “The security situation is extremely volatile and unpredictable. Insurgents are engaged in a coordinated campaign to destabilize the government of Afghanistan through acts of terrorism and kidnapping. Foreigners whose country of origin has supported the US-led coalition forces, including Canadians, are preferred targets for terrorist attacks and kidnapping,” it stated.

In other news, Senior Deputy Interior Minister for Security Affairs Abdul Rahman Rahman met with French military attaché in Kabul and appreciated France’s support to the Afghan government over the past two decades, and emphasized on the importance of France’s role in supporting the ANDSF. Both sides discussed France’s continued cooperation in capacity building of the Afghan National Police (ANP), and the French attaché appreciated the ANDSF efforts and sacrifices in fighting crimes, terrorism, and drug trafficking, and assured of his country’s continued support in support of the ANP.