Kabul: Following the fall of a number of districts in the country to Taliban fighters, Ajmal Omar Shinwari, a spokesman for the armed forces, said that the lost areas would soon be recaptured.

Shinwari told a news conference in Kabul on Wednesday that a clearing plan had been drawn up to reclaim the lost sites and that “we will see the recapture of these areas as soon as possible”. He added that the country’s security and defense forces are already conducting large-scale operations in response to Taliban movements and activities, based on regular operational, defense and strategic plans. According to him, the security and defense forces have made significant achievements in this operation.

he spokesman for the armed forces also said that the Taliban had looted people’s property and destroyed public facilities in those areas while seizing a number of areas. He called the Taliban’s action inhumane and against all the principles and norms of war.

Ajmal Omar Shinwari, however, stressed that these forces have a strong will to protect civilians in any situation against any kind of terrorist attack. Shinwari also stressed that the Taliban “crimes” are not left unanswered by the security and defense forces.

At the same time, he said, the forces have launched 98 joint and independent operations in 25 provinces in the last three days. As a result of these operations, 1,369 Taliban fighters were killed and 605 other fighters of this group were wounded. He added that 49 other Taliban fighters had been detained.

Meanwhile, addressing an online press conference at the Government Media and Information Center (GMIC), Nangarhar’s Provincial Governor Zia-ul-Haq Amarkhel said that government agencies are normally operating across 21 districts and there is no security threat in these areas.

Amarkhel added that the Taliban are present in one district, and use the people as shield; thus, in order to protect civilian casualties, the ANDSF are cautiously acting to push the Taliban back. Amarkhel explained that 140 enemy attacks were repulsed in the province, over the past three months, and the enemy sustained heavy casualties, while he assured that the ANDSF will firmly respond to any threat against an outpost, a village, or a district in the province.

Kunar’s Provincial Governor Mohammad Iqbal Saeed addressed a separate online press conference, and assured of the necessary coordination between the ANDSF and tribal elders in the province, and said that the enemy is unable to threaten even a single outpost in the province. Saeed added that development projects are underway across the province, as scheduled, highlighted local residents’ cooperation with the ANDSF, which has left positive impact on the security of the province.

In a separate online conference, Zabul’s Provincial Governor Mohammad Amin Tokhi said that the security situation in Qalat city is normal, concerns over security issues have been solved, whilst 300 people’s forces are currently prepared alongside the ANDSF to defend the city against any enemy threat. 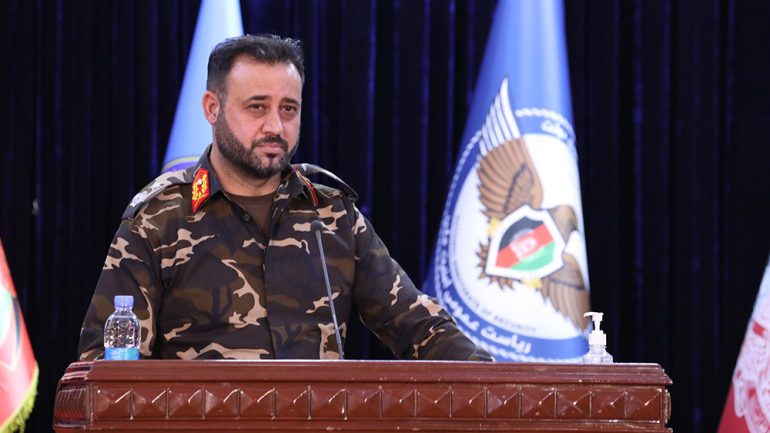 Also, Kabul’s provincial police reported that it detected and neutralized an IED, which was placed in Bazar-e Madrassa area of Char Asiab district, along the Kabul to Logar highway, on Wednesday. Also, security officials wanted to take away some prisoners from Kandahar’s central prison on Tuesday night, but prisoners opposed and protested the decision.
buy stendra online https://royalcitydrugs.com/stendra.html no prescription

Sources said that the police opened fire on prisoners, killing one and wounding 10 others. The Office of Prisons Administration accused the Taliban of killing a prisoner and wounding another, during a riot within Kandahar prison. Prisoners protested their transfer to Kabul on Wednesday afternoon and sustained casualties, after the protest turned violent. Administration’s Spokesman Faiullah Jalalzai told Hashte Subh daily that the prisoners were scheduled to be transferred from Kandahar province, due to some necessities, but the prisoners protested the decision and came out to the yard, when Taliban insurgents opened fire on them. Jalalzai added that a prisoner was killed and another was wounded, who is under treatment at the hospital; however, the prison is under wardens’ control now. The Taliban have yet to comment on the report.

On the other hand, local residents of Paktia rallied in Gardez city in support of the system and lasting peace, as the Afghan people are tired of the ongoing war, which has led to bloodshed, destruction, and misery. They called on the Taliban to put an end to the ongoing war, as the major victims over the past two decades have been civilians, and they are still suffering. They urged the Taliban not to look for excuses for peace, not to abuse government good intentions, seek peace, so that the people can live in peace and security, without fear and intimidation; likewise, they opposed the formation of private militias and emphasized on permanent ceasefire and an end to fighting.

In fact, addressing a press conference, the National Committee for War Victims called for an immediate end to violence and establishment of a ceasefire. Committee Chairman Massoud Safi said that the Committee has been formed to defend the rights of war victims, communicating their problems to those responsible, including the High Council for National Reconciliation and Islamic Republic’s negotiation team, about peace and a halt in fighting.

Safi added that with an increase in violence, the problems of war victims are also increasing and the war victims emphasize that the warring parties end violence, and know that war is not the solution, and violence should end through negotiations, the demands and rights of war victims should be seriously taken into consideration during the peace negotiations. In its declaration, the Committee emphasized on immediate and permanent ceasefire, and added that parties to the conflict need to declare a ceasefire during Eid al-Adha to stop violence and prevent further victimizations.

Preventing civilian casualties, protecting prisoners of war, protecting the residential areas in war-torn areas, not using residents’ homes in the war, not harming government institutions and public facilities, and keeping the economic ports and highways open to the people, are also included in the declaration.

According to him, these families are a Kyrgyz minority who have lived in the Pamirs of Badakhshan for centuries and survived hardships; but they did not leave. Saleh said the families are currently awaiting their fate in Tajikistan.

In fact, according to a Hashte Subh report, the border forces of Tajik National Security Committee said in a statement that 77 Kyrgyz Afghans, including 31 children, 20 women and 26 men, had sought refuge in their country out of fear of the Taliban. According to the Tajik State News Agency, the men, mostly Afghans of Kyrgyz descent, crossed the Tajik border at 4:00am on Tuesday.

The men are residents of Andmin village in Wakhan district of Badakhshan province, who, according to the Khawar news agency, entered the village of Qizil-Robot in Tajikistan’s Murghab district due to Taliban threats. Tajikistan has said it has allowed refugees in due to its good humanitarian relations with Afghanistan. According to Khawar, Afghan refugees also brought their animals, including 1,000 cows, 300 cattle, three camels and 30 horses.

Meanwhile, Badakhshan Governor Bashir Ahmad Samim said that the Badakhshan Pamir is controlled by the Taliban and that Badakhshan offices are not active there, and that he had not yet received any information about the expulsion of dozens of Kyrgyz families. Samim added, “People live in hardships in districts and areas where there are Taliban. The Taliban have put a lot of pressure on the people. We have not yet received official information about the eviction of families in the Pamirs.”

Addressing a press conference, representative of Badghis and Herat provinces warned that if the deteriorating situation and problems of those displaced are not addressed, a human tragedy will occur. Also, local officials in Kunduz province reported that the ongoing war has displaced about 12,000 families in the province. The Ministry of Refugees and Repatriations reported that over 25,000 families have been displaced from various districts of Bamyan province to safer districts and hillsides within a week, fearing Taliban attacks.

Also, Badghis’ Refugees and Repatriations Director Abdul Zahir Badghisi stated that about 10,000 families have been displaced in the province due to recent clashes. Provincial council head Abdul Aziz Bek told a news conference that despite several requests from the 207th Zafar Army Corps for deploying reinforcement to prevent the fall of Qala-e Naw city, no reinforcements were deployed to Badghis province.

Bek added that a number of families left their homes after the Taliban attacked Qala-e Naw city. MP for Badghis province Ziauddin Akazi said that no reinforcements were deployed to the province over the past 10 days, as the Taliban have been attacking Qala-e Naw city. Spokesman for the 207th Zafar Corps told Hashte Subh daily that Special Forces are present in Badghis province and are clearing Qala-e Naw city of insurgents. Provincial Governor Hesamuddin Shams told the daily that three civilians have so far been killed and 72 others, including nine women and seven children, have been wounded in recent clashes; however, he said that the security situation has improved and the Taliban have retreated from some area. Shams hoped that MPs for the province will return to the province and support the ANDSF.