Kabul: The Shanghai Cooperation Organization (SCO) foreign ministers have called on the conflicting sides in Afghanistan to abstain from using force or taking steps that can lead to destabilization in the republic’s border areas, a joint statement signed by the ministers on the outcomes of the SCO-Afghanistan Contact Group meeting on Wednesday informs.

“We strongly call on all sides involved in the conflict in Afghanistan to abstain from using force or taking action that may lead to destabilization and unpredictable consequences in the areas of Afghanistan’s borders with SCO member states,” the document says.

The activity of international terrorist organizations remains one of the key instability factors, the SCO member states stressed, expressing concern over the escalation of tensions in Afghanistan’s northern districts “as a result of a sharp increase in concentration of various terrorist, separatist and extremist groups”. “We consider it important to scale up joint efforts of the SCO member states with the aim of countering terrorism, separatism and extremism,” the statement notes. At the same time, the SCO member states have reaffirmed their readiness to cooperate with Afghanistan to deal with the threats and challenges in the region, which include terrorism and drug crime.

The countries also expressed their interest in Afghanistan becoming a peaceful, stable and prosperous country, reaffirming their respect for the traditions and culture of all nations populating the republic. “In accordance with the generally recognized principles and norms of international law, first and foremost, the UN Charter, the SCO member states reaffirm their respect for sovereignty, independence and territorial integrity of Afghanistan. They aim to aid Afghanistan on its path to becoming a country free of terrorism, war and drugs,” the document reads.

In order to stabilize the situation in the country, the SCO states call on other players and international structures to expand their cooperation with Afghanistan. “We confirm the readiness of our countries to expand further cooperation with Afghanistan in the spheres of politics, security, economic and humanitarian cooperation, namely through the complete implementation of the potential of the Islamic Republic of Afghanistan’s participation in SCO activity as an observer state,” the representatives of the organization concluded.

He listed out three main focal points for Afghanistan, including- a) an independent, neutral, unified, peaceful, democratic and prosperous nation; b) ceasing violence and terrorist attacks against civilians and state representatives, settle conflict through political dialogue, and respect interests of all ethnic groups, and; c) ensure that neighbors are not threatened by terrorism, separatism and extremism. 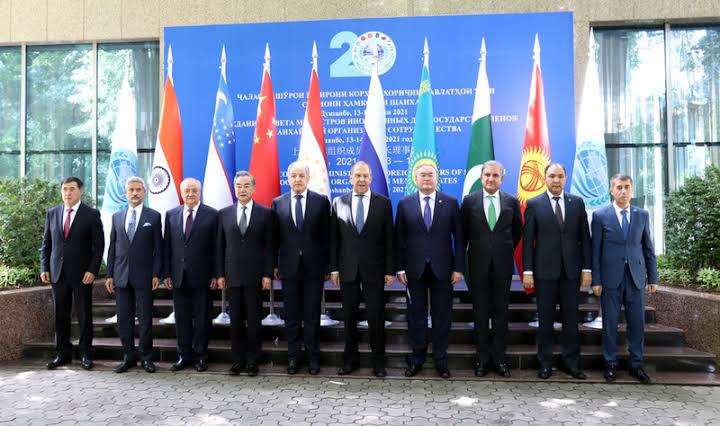 “The challenge is to act seriously and sincerely on these beliefs. Because there are forces at work with a very different agenda. The world is against seizure of power by violence and force. It will not legitimize such actions,” tweeted Jaishankar.

He added that peace negotiations in earnest is the only answer. “An acceptable compromise that reflects Doha process, Moscow format and Istanbul process is essential. The future of Afghanistan cannot be its past. A whole new generation has different expectations. We should not let them down,” he said.

Meanwhile, a reliable source in Farah province told Etilaat roz daily that Mullah Ibrahim, the police chief of Pur Chaman district, had joined the Taliban with more than 150 soldiers.

The source, who spoke on the condition of anonymity, said that the forces had joined the Taliban on Tuesday. The source added that with the fall of the district, all ten districts of the province have come under the control of the Taliban.

Shah Mahmood Naeemi, deputy head of the Farah provincial council, confirmed the fall of the district and the joining of the police commander to the Taliban, in an interview with the Etilaat Roz daily. The Taliban have also confirmed that Pur Chaman police chief has joined the group. Currently, Farah’s local and security officials are focusing on strengthening the city’s security belts.

Meanwhile, in a decree, President Ashraf Ghani has appointed Abdul Matin Bek as the President’s Chief of Staff.

President Ghani also held a phone conversation with Italian Prime Minister Mario Draghi on Wednesday, and praised the Italian government people for their effective security and development assistance, especially to Herat province, emergency hospitals in Afghanistan over the past two decades. Ghani hoped that bilateral relations will further expand and continue in the new chapter of relations between Afghanistan and the international community. Draghi said that Italy is a friend to the Afghan people, and its forces have withdrawn from Afghanistan, but Italian government’s and people’s commitment to the Afghan people remain untouched, and called for strong relations between Afghanistan and Italy.

Also, Senior Presidential Advisor Mohammad Mohaqqeq met with Second Vice-President Mohammad Sarwar Danesh to discuss security and political developments in Daikundi province. Given the sensitive situation, it has been decided that the provincial leadership remain unchanged to honor the people’s approval and full consultation on the issue, and a qualified individual will be proposed to the President for the province, after a while, in a proper circumstance with consultations from both sides.