Kabul: A security source at the Ghazni Police Command confirmed that the Taliban fighters’ attack on the province’s central prison had been repulsed.

The source, who did not want to be named, told etilaat roz daily on Wednesday that the Taliban had launched an attack on the Ghazni Central Prison building in the city’s PD3 on Tuesday night. According to him, the Taliban attack was repulsed by security and defense forces at around 3:00 AM after several hours of fighting. The Taliban have not yet commented.

Also, security sources in Ghazni province confirmed that Taliban fighters have set fire to a school in Ghazni city. The source, who spoke on the condition of anonymity to Etilaat roz daily said that the incident took place on Tuesday evening in the “Haidarabad” area of the Ghazni PD5. He added that the school that was set on fire was a high school. The Haidarabad area fell to Taliban fighters a few days ago. The Taliban have not yet commented on it.

However, Ghani governor has reacted to the criticism and said, “The fall of districts and security bases did not begin with the arrival of Mohammad Daud as provincial governor, but several major districts and bases had already fallen and the enemy had announced that they would hold Eid al-Fitr prayers in Ghazni city. With his arrival, the ANDSF gained additional morale and cohesion among the ANDSF improved, compared to the past. Due to betrayal of a number of people within the system and the influence of spies disguised as elders, a number of districts and military centers across all provinces fell to the Taliban and threats have reached the cities. However, our security team inflicted heavy casualties to the Taliban and targeted their centers. The current critical situation requires unity and brotherhood among the people in Ghazni, support the ANDSF to save the province from the enemy.”

Meanwhile, the ANDSF killed a Taliban member named Shafiqullah, aka Khayat, and Abbas, aka Khorasani, along with two others in Mohammad Agha district, Logar province on Tuesday night. The ANDSF also confiscated their weapons, equipment, and vehicle, as per the Ministry of Interior (MoI).

Also, 17 Taliban insurgents including the group’s Red Unit commander Nasrullah were killed and five others were wounded during a targeted airstrike in Abdal village of Taloqan city, Takhar province, on Tuesday, as per the MoI. 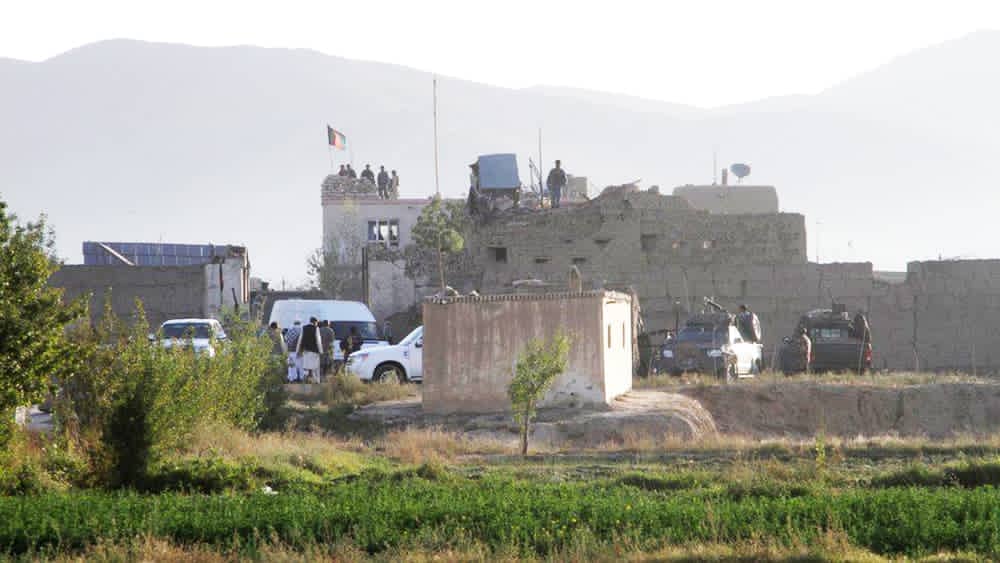 In other news, security sources in Kapisa province said that Mawlavi Jan Agha, a teacher at the Darul Uloom Imam Azam and an Imam of a mosque in the Hese Dowom of Kohistan district was assassinated by unknown individuals. Abdul Shaykh Shooresh Kouhestani, a spokesman for the Kapisa Police, told the Etilaat roz daily that the incident took place at around 4:00am on Wednesday in the village of Khum Roba. Kouhestani also said that the Imam had been shot and killed by unknown individuals as he was walking towards the mosque to pray.

No individual or group has so far claimed responsibility for the assassination of the imam, and no one has been arrested in connection with it.

Meanwhile, the National Water Affairs Regulation Authority reported that a large number of mortar rounds were recently fired against the Salma Dam in Chishti Sharif district, Herat province, many of which landed near the dam. If these attacks continue, the Salma Dam will be damaged which will result in human and financial losses, it stated. “The lives and livelihoods of many of our compatriots across eight districts towards the south of Salma Dam depend on the water stored in the dam. Our demand to the Taliban is that the national asset belongs to all and should not be damaged by wars, the Salma Dam should be protected, and any attacks on it must stop,” it said.

In case of damage to the Dam, everyone from Chishti Sharif to Kohsan district will be affected, and the responsibility shall fall on them, which is a historical disgrace for perpetrators of this tragedy, it added.

In fact, even Bamyan Governor Mohammad Taher Zaheer said that they are fighting the Taliban and punishing those, who he says, speak in favor of the Taliban in Bamyan. Zaheer, on Wednesday, said that negative propaganda and demoralization of the people in the province should be avoided.

“The Taliban have no one,” he warned the Taliban. “It is a hated and despicable group. I instruct the head of national security to bring to justice anyone who exaggerates about this group,” he said. He noted that operations are under way to suppress the Taliban in all parts of the country and that all districts would soon be recaptured. He told Bamyan residents who had fled their homes due to security threats that security forces would not allow the Taliban to enter Bamyan.

On a good note, Zahra Jalal, a member of the reconciliation council and Khost provincial council who was abducted with her four sons in Logar on Tuesday has been freed following mediation by tribal elders, sources said.

In fact, Khost’s Provincial Police Chief Saifullah Sarhadi and Infantry Army Brigade Commander Gulbuddin Alokozay traveled to Musakhel district to praise the ANDSF involved in the ongoing clearance operation in the district, heard people’s problems, noted down points to strengthen some outposts, and establish new outposts there. Sarhadi said that new outposts will be established in some areas and the existing outposts will be strengthened in the district, directed by the central government, to defeat the enemy. Alokozay claimed that over 90 Taliban insurgents, including key commanders, were killed or wounded during the recent series of operations in the district, and the ANDSF seized their vehicles and ammunition.

“There is neither rational nor religious justification for continuation of war”, Hekmatyar added. He suggested, reconciliation, peace, intra-afghan talks and dialogue should be deemed as the ideal and rational means through which the goals should be pursued. Hekmatyar said the Taliban should shun the war.

Earlier, former president Hamid Karzai also said that the Taliban with their current territorial gains can achieve nothing. He in similar call on both the Taliban and Afghan government said, the current opportunity for peace must be seized not wasted. It comes as 11-member delegation led by head of High Peace Council Abdullah Abdullah is due to visit Doha next Friday. The delegation also includes Hamid Karzai and Gulbadin Hekmatyar.