Kabul: A two-day high-level meeting between representatives of the Islamic Republic of Afghanistan and the Taliban began on Saturday in Doha, the capital of Qatar. The delegation of the Islamic Republic of Afghanistan is chaired by Abdullah Abdullah, Chairman of the High Council for National Reconciliation (HCNR). The Taliban delegation is said to be led by Mullah Abdul Ghani Baradar.

“The people of Afghanistan are passing difficult days. The war is raging and the real victims are our people,” Abdullah said. He added that there is no military solution to the Afghan problem and that It does not matter if the Islamic Republic of Afghanistan uses force or Taliban movement seeks victory through violence and war; the main losers of the current war are the people of Afghanistan.

He added that Afghanistan still needs to rebuild relations with the region and the world, and that the region’s economic connection requires peace and stability in Afghanistan. According to Abdullah, the people of Afghanistan, with the help of the international community, have made great achievements in recent years, including the right to vote for a national leader, women’s rights and freedoms, minority rights, freedom of expression, war victims’ rights and other advances.

He stressed that perceptions of these achievements may be different, but that these differences of opinion should be subject to collective judgment by the people, and that imposition of perceptions and ideas in a non-peaceful way should be avoided. He said that the negotiating parties must reach a positive conclusion taking into account the demands of the people, otherwise the war will be prolonged and the country will once again become a ruin.

According to Abdullah, the negotiating team of the Islamic Republic of Afghanistan, has the authority to negotiate on behalf of the people on all issues, including the next steps needed to reach a final decision. He added that regional and global space has been provided for peace in the country, and that achieving peace requires the flexibility of both sides (the government and the Taliban). 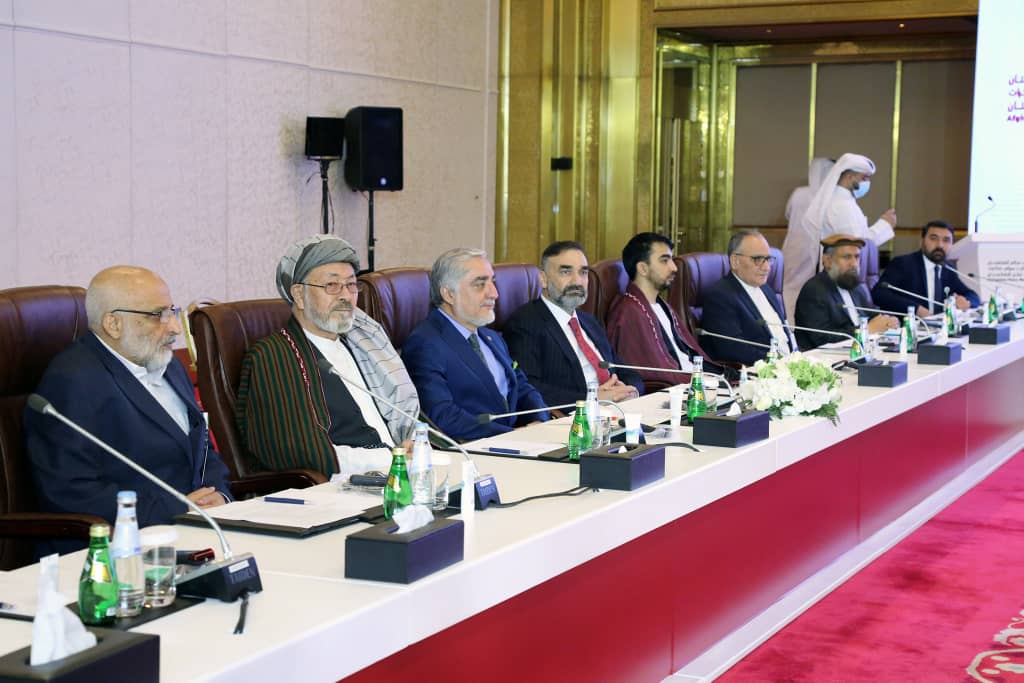 “Afghanistan still needs reconstruction and constructive relations with the region and the world. The regional economic connectivity requires peace and stability in Afghanistan. The recent meeting in Tashkent, in which all the countries of the region and the world emphasized the role of peace in Afghanistan for regional development, is a noteworthy issue. If this opportunity is also wasted, we will be held accountable to God, the people, history and the world,” Abdullah said.

“We hope that this meeting will have good results for the sake of peace and prosperity in the country, and finally put an end to the longest tragedy and war in our country. Reaching peace requires flexibility on both sides. We believe that regional and global condition has been provided for peace in the country. We welcomed Qatar’s facilitation and mediation in cooperation with the United Nations and find it useful for the progress of negotiations,” Abdullah concluded.

Meanwhile, Mullah Abdul Ghani Baradar, political deputy and head of the Taliban’s office in Qatar, stressed on an independent, central and powerful Islamic system during his speech. According to him, the Taliban expect the intra-Afghan talks to be successful. He also said that everyone should give up selfishness, self-interest and personal goals in order to achieve peace.

“Our country has vast resources and facilities and if the nation is at peace, in a very short time, we will have a prosperous, comfortable and dignified life. In order to achieve all this, a strong, centralized and independent Islamic system is necessary. In this regard, selfishness, personal interests and ambitions must be transcended,” he added.

Baradar said, “The inter-Afghan talks have been going on here for almost ten months now. Unfortunately, there are some problems. There is no progress as expected, but there is no despair.
buy lipitor online salempregnancy.org/wp-content/languages/new/buynoprescription/lipitor-no-prescription.html no prescription

Taliban has tried its best to bring the talks to a positive conclusion; therefore, it appointed a strong negotiating team, bringing in its senior officials.”

He added, “We want progress, we want a good and comfortable life, but not at the cost of our Islamic values, independence and freedom.”