Kabul: The people of Qalandar district expressed their support for the republic and the national security forces during a gathering. Qalandar District Governor Gulab Mangal and others in their speeches supported the republic, ANDSF and the provincial government and assured their full cooperation.

They said that the republic is the demand of the people and they will defend the republic and the land alongside the ANDSF, and will not allow anyone to destroy public facilities in their area, disrupt people’s lives, and hinder development and prosperity. Khost’s Provincial Governor Mohmand Katawazi thanked the Mangal tribal elders, youth and religious scholars for their support and cooperation with the ANDSF.

Katawazai saidd that all the civilian and military leadership are well coordinated, they will not allow any enemy to disturb the peaceful situation of Khost and the province will remain calm with the help of its people. Katawazi added that the lives and rights of all the people are protected in the republic and the government brings prosperity to the people, unlike the enemy who has temporarily occupied some areas, destroyed public facilities there and started harassing the people. The enemy is destroying public facilities for the benefit of foreigners, loots people’s homes and threatens people’s lives. The governor urged them to stop fighting for the benefit of foreigners and try for peace.

Also, sources told Salam Watandar that heavy clashes are ongoing in PD6 of Maimana city, as the Taliban have attacked from 3 directions. Fighting is also underway in Sabz area of Pashtun Kot district. Provincial Police Spokesman Abdul Karim Yourish confirmed clashes in Maimana city and assured that the ANDSF are fully prepared to defend the city against the Taliban.

In other news, President Ashraf Ghani announced at a cabinet meeting on Saturday, that Bagram Airport is worth $ 3 billion and that its facilities will be used properly. Bagram Air Base in Parwan Province has been home to US forces for the past 20 years. Following the withdrawal of the field by US and NATO forces, responsibility was handed over to the Afghan security forces.

Also, security officials in Jowzjan province reported that 888 police unit entered Sheberghan city to suppress the Taliban. Provincial Police Chief Khwaja Jailani Abu Bakr said that Taliban attacks against Sheberghan city has been repulsed by the ANDSF, supported by the Air Force. Abu Bakr added that over 100 Taliban insurgents, including 3 key commanders, were either killed or wounded in the city. Abu Bakr added that with the arrival of reinforcements, a clearance operation will soon begin. 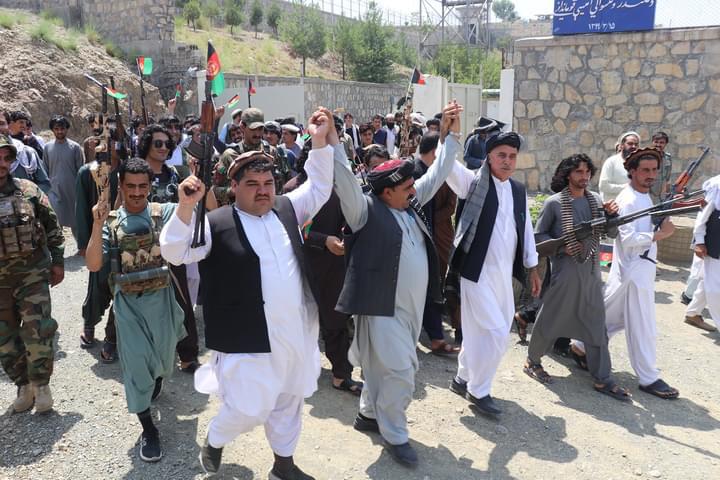 Meanwhile, Amrullah Saleh, the first vice-president, has said that the Taliban desires to establish a fanatical dictatorship and to obey Rawalpindi and destroy Afghanistan’s material and spiritual assets under the guise of religion. “This false wish will never be fulfilled, and the dignity of the homeland depends on the courage and ability of the soldier,” Saleh wrote on his Facebook page on Saturday.

Saleh went on to say that for the Taliban, history is 26 years old in terms of time, and in terms of location, it starts from Akura School in Khattak and Kachlaq town of Balochistan, Pakistan. “I begin my days by talking to soldiers on the scene, and there is no defense or security unit that I have not contacted or taken care of,” the first vice-president wrote.

In another post, Saleh wrote: “Pakistan put a special and tough Abdali name on its rockets without permission, and we could not do anything about this spiritual theft; because we were scattered and fragmented. Now the war is on the outskirts of Kandahar. Baba is buried in the grave and asks you not to allow the mercenaries of Rawalpindi to conquer a city with this name and strength and to celebrate the plunder of Kandahar in Islamabad and Lahore.” Saleh made the remarks after he said that Pakistan had not allowed the Afghan Air Force to attack Taliban fighters in the area after the fall of the Spin Boldak crossing in Kandahar province.

Meanwhile, members of parliament and women political activists continued their talks with members of parliament around the world on Friday about Afghanistan’s peace talks and the role of women in the process, following the withdrawal of Resolute support forces. The meeting was attended by Afghan Ambassador to Belgium, EU and NATO, Nazifullah Salarzai; Chairwoman of the Parliamentary Women’s Affairs Committee Naheed Farid; Shinkai Karokhail, Chair of the Women in Parliamentary Group for Political Participation; Shukria Issakhel; Mariam Solaimankhel; Nazifa Bek and Zahra Tokhi Members of parliament were attended by Dr. Alema, Deputy Minister of State for Peace, and Frozan Nawabi, Director of Human Rights and Women’s Affairs at the Ministry of Foreign Affairs.

Referring to the problems of different segments of the population, especially women and girls in the Taliban-controlled areas, the Afghan delegation stressed that if the international community and the European Union do not support the Afghan security and defense forces against terrorists, they will see an influx. The influx of Afghan refugees to countries in the region and the world will increase drug trafficking and the victory of extremism and terrorism in Afghanistan and the region. The delegates of Afghanistan called the EU’s support for the country’s security and defense forces against the Taliban and other terrorist groups important and valuable, and called for the continuation of the EU’s cooperation with the country’s defense and security forces.

Members of the European Parliament called the high level of violence unacceptable and called on the Taliban to end the war, secure a ceasefire and resolve the crisis through negotiations. Participants stressed the need to eliminate safe havens for terrorists on Pakistani soil and called on Pakistan to bring the Taliban back to the negotiating table. In continuation, Europe Parliamentarians, talked about how the bloc continued to support Afghanistan and promised that they would not allow Afghan women to return to the dark ages.