Kabul: Dozens of Taliban fighters have been killed in ground and air strikes by security forces in the Nahr-e-Chaman area of Taloqan city, the provincial capital, the Takhar National Directorate of Security (NDS) said.

There were also reports of additional commandos and special forces being sent in as reinforcements to Taloqan to launch a clean-up operation. A statement issued by the provincial directorate on Saturday said that key Taliban members had also been killed in the operation. According to the statement, Abdul Qadir Fitrat, military deputy director of the Takhar Security Directorate, and Ahmad Shah Salehi, Farkhar police chief, were also released from the Taliban’s hold and returned to the battlefield. Meanwhile, Deputy spokesman of Defense Ministry Fawad Aman tweeted that security forces and popular mobilization in Takhar are advancing and that many areas on the outskirts of Taloqan had been cleared of the Taliban.

Clashes in parts of Taloqan, the capital of Takhar province, have been going on for days, and successive Taliban attacks to seize the city have failed.

Meanwhile, local sources in Ghazni province said that a delegation from Kabul has gone to Jaghori district of the province to check the security situation. Hassan Reza Yousufi, a member of the Ghazni Provincial Council, told Subhe Kabul daily that several MPs for Ghazni province and Dawood Naji, a senior political adviser to the National Security Council, are in the delegation. 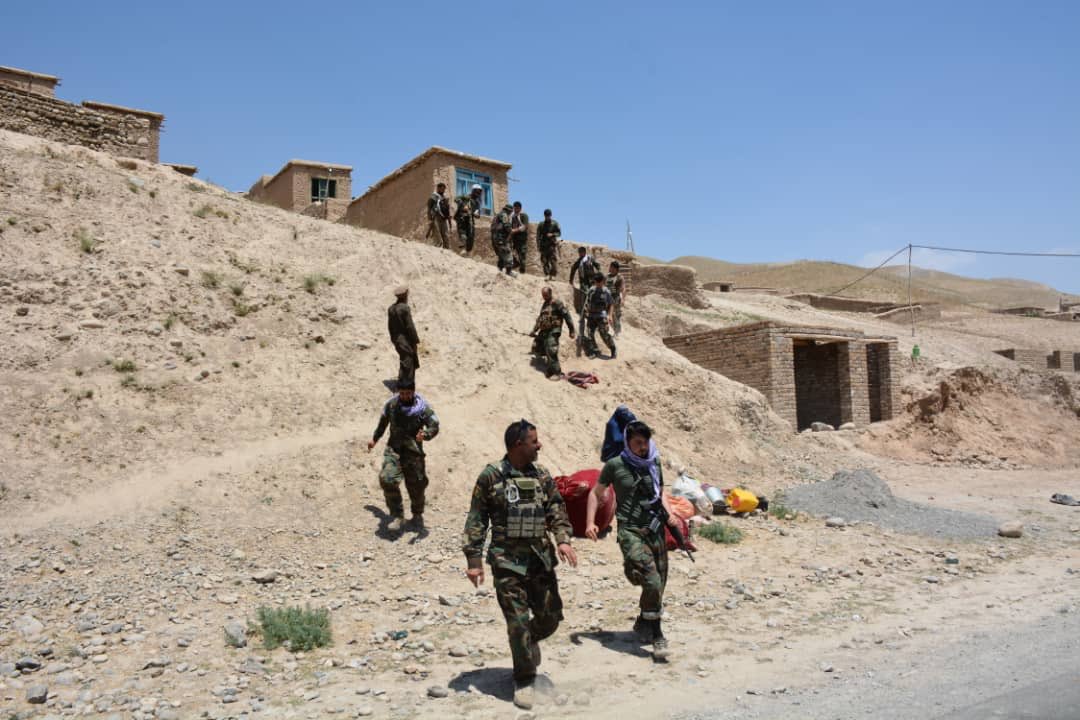 “The Kabul delegation is scheduled to review the security situation in the three districts,” he added. “Measures are also being taken to rid the Malistan district out of the Taliban hands.” Yousufi also said that until two nights ago, fighting was going on in Jaghori district, but now it has stopped. According to him, in Nawur district, the Taliban also attacked the security forces from two resistances and were forced to retreat with heavy casualties.

According to members of the Ghazni Provincial Council, only Jaghori and Nawur districts and parts of Ghazni city are currently under government control, and the rest of the province is under the control of Taliban fighters.

Also, the United States provided seven new helicopters to the Afghan Air Forces, said the Ministry of Defense deputy spokesperson Fawad Aman, adding that the helicopters were brought to Kabul on Saturday and it is to be officially handed over to the AAF soon.

Meanwhile, Afghan government forces battled on Friday to retake a border crossing with Pakistan from Taliban insurgents, and the Reuters news agency said one of its photographers was killed in the area. The Taliban had overrun the Spin Boldak crossing earlier in the week. On Friday, witnesses on the Pakistan side of the border said they saw intense fighting and reported seeing bodies. Afghan Interior Ministry spokesman Tariq Arian later tweeted that the government had retaken control of Spin Boldak. Reuters said Pulitzer Prize-winning photographer Danish Siddiqui, who was embedded with the Afghan special forces, was killed as the commando unit sought to recapture Spin Boldak.