Kabul: Delegations from the Afghan government and the Taliban said in a joint statement on Sunday that they will meet again and plan to expedite peace negotiations after two days of inconclusive talks in Doha.

The negotiators from the rival sides, who have been in Doha since Saturday, said “the two sides committed to continue negotiations at a high level until a settlement is reached”. For months, the two sides have been meeting intermittently in the Qatari capital, but have achieved little success. The discussions appear to have lost momentum as the Taliban fighters have made enormous gains on the battlefield.

Senior representatives of the Afghanistan government, including the head of the High Council for National Reconciliation, Abdullah Abdullah, flew in for two days of intensive talks as US forces are about to complete their troops’ pullout. Ahead of the second day of talks, the Taliban’s Supreme Leader Haibatullah Akhundzada had said “the Islamic emirate strenuously favors a political settlement” despite the groups lightning victories on the ground.

But the Qatari facilitator of the talks said at the end of the two days that the sides had merely agreed to “work to prevent civilian casualties”, far short of previously agreed ceasefires. “The two sides agreed to continue negotiations at a high level until a settlement is reached. For this purpose, they will meet again next week,” said Qatar’s counterterrorism envoy Mutlaq al-Qahtani, who oversees the Doha talks.

HCNR chairperson Dr Abdullah Abdullah, said, “We exchanged views on core issues concerning the two parties and listened to each other’s point of views, interpretations and the ways forward to end the conflict through a comprehensive political settlement. In the joint statement issued at the conclusion of the talks, we agreed to continue the talks, seek a political settlement to the current crisis, avoid civilian casualties, facilitate humanitarian assistance and medical supplies to tackle Covid-19 pandemic.”

“During the talks we reiterated the republic’s commitment to a just and durable peace, an end to violence and resolving the current crisis through a negotiated political settlement. We thank all our partners, especially the State of Qatar for hosting and supporting the peace talks.
buy udenafil online http://www.mrmcfb.org/images/layout4/new/udenafil.html no prescription

Abdullah told the Taliban that violence brings violence and that the idea of victory is an “incalculable mistake”. On Monday, HCNR chairman issued a statement reaffirming the Afghan government’s commitment to ending the war in the country.

The statement said, “The Islamic Republic of Afghanistan has always expressed its commitment to ending the war, a nationwide ceasefire and a just and lasting political solution. Unfortunately, the other side has taken the time to jeopardize the historic opportunity to end the 43-year-old conflict.” Dr. Abdullah said that the notion that the current conflict could end with the escalation of violence, killing and bloodshed is an irreparable miscalculation and that violence creates violence.

According to him, the people of Afghanistan will not surrender to any force, oppression. Therefore, it is better for the Taliban to understand the current situation in the country, to have a meaningful and fruitful dialogue, and not to torture the Afghan people any more.

He added that the continuation of violence, bloodshed and the destruction of infrastructure, public assets and the Afghan people’s achievements is a stance against the development and honor of Afghanistan. Abdullah said the solution to the ongoing conflict is not through military means and that no group can reach its goal militarily.

In fact, the agreement on further talks between Kabul and the Taliban in Doha inspires hope, Russian president’s special envoy for Afghanistan and director of the Russian foreign ministry’s second Asia department Zamir Kabulov told TASS on Monday. “It inspires hope that the sides have agreed, at least rhetorically, to continue to speak with each other,” he added.

Meanwhile, referring to the latest developments in Afghanistan, the Director-General of the Department of South Asian Affairs of the Iranian Foreign Ministry said that Iran is looking for a secure and peaceful Afghanistan. In a tweet on late Sunday, Rasoul Mousavi wrote that it is not possible that we were not worried about the future of the Shia in Afghanistan. 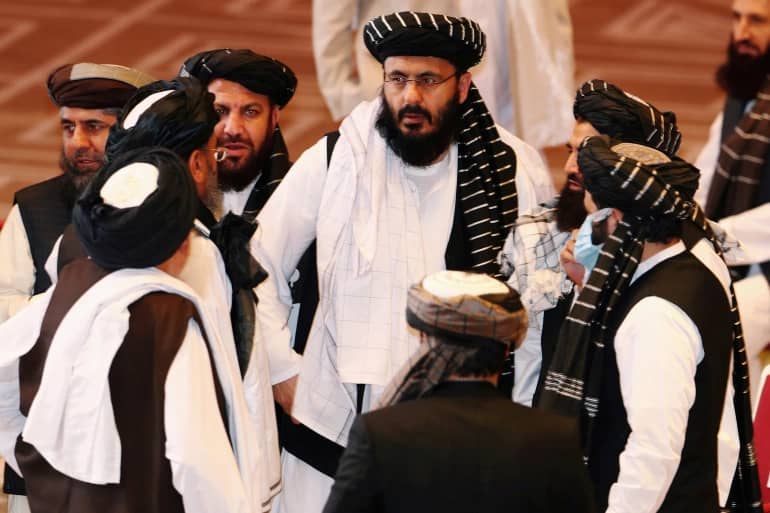 “The concern is not because Iran has a particular view of Afghanistan’s Shia, but because Iran is looking for a secure, stable and peaceful Afghanistan, and this is possible only by guaranteeing the position and rights of all ethnicities and religions in the Constitution,” he added. It is pertinent to note that Iran had facilitated talks between the warring factions recently and plans to hold a second meet soon too.

The Iranian foreign ministry also underlined the country’s support for continued talks among Afghan groups, saying that Iran will not tolerate insecurity and unrest in Afghanistan. “We carefully control and monitor the situation at the borders. Afghanistan’s security is our security and the unrest in Afghanistan will not be tolerated by Iran,” Foreign Ministry Spokesman Saeed Khatibzadeh told reporters in a press conference in Tehran on Monday. “We are actively in touch with Afghan groups. We are ready to continue this job [holding meeting] again. We welcome and support any initiative in this direction,” Khatibzadeh said. “Only a comprehensive and mutually beneficial dialogue can help achieve peace in Afghanistan,” he added.

In fact, due to the rising violence, even the diplomatic missions to the Islamic Republic of Afghanistan of Australia, Canada, the Czech Republic, Denmark, EU delegation, Finland, France, Germany, Italy, Japan, Korea, the Netherlands, the Office of the NATO Senior Civilian Representative, Spain, Sweden, the UK and the US have called for an urgent end to the Taliban’s ongoing military offensive, which according to them, thwarts efforts to arrive at a negotiated solution to the conflict and harms and displaced the civilian population.

In a joint statement, the diplomatic missions said, “We condemn the continued targeted killings taking place, destruction of vital infrastructure, and threats to other vital gains made over the past 20 years. We join the United Nations Assistance Mission in Afghanistan in calling on the Taliban and all parties to immediately end the violence, agree to a permanent and comprehensive ceasefire and engage fully in peace negotiations to end the suffering of the Afghan people. This Eid ul Adha, the Taliban should lay down their weapons for good and show the world their commitment to the peace process.”

Meanwhile, a large group of religious scholars from across Afghanistan held a gathering on Monday and made strong demands that the Afghan government and the Taliban agree to a ceasefire, make efforts for peace and stop the violence that “brings destruction and killings” to the people and the country. Citing the unprecedented increase in violence, widespread displacement of civilians, and the damage to infrastructure in some provinces, the scholars said there is an urgent need to end the bloodshed, calling the ongoing war “forbidden” by Islam and decrying the conflict as it is killing Afghans. “Let’s be part of an effort to end the suffering of the people,” said Jamaluddin Fayiq, a religious scholar.

“The religious scholars ask the warring parties to support peace and end ongoing problems through negotiations,” said Jalaluddin Hanafi, a religious scholar. The clerics said Afghans will stand against the Taliban if the group refuses to join peace. They also called on the government to avoid creating obstacles in the way of peace. “Neither the republic nor the emirate is holy, but the only way out for us is through the teachings of the Quran,” said Mohammad Sarwar Omari, the head of the secretariat of the religious scholars’ council.