Kabul: Statistics recorded on the battlefield show that with the withdrawal of foreign troops from the country, the rate of violence and conflict has increased. According to statistics recorded by Armed Conflict Location & Event Data Project (ACLED), from May 1 to July 15 this year, more than 2,900 security incidents occurred across the country.

As a result of these security incidents, more than 17,600 Taliban fighters, security forces and civilians have been killed. Based on the information of ACLED, the average death toll in the last two and a half months has reached 235 people per day. This is the highest number recorded in the country in recent months. Violence in the country has escalated as the Afghan government and the international community have repeatedly called on the Taliban to cease fire and take the peace talks seriously. These demands have not been met, however, and the clashes have intensified. President Ghani recently said that the Taliban have no will to make peace, so he has a plan on the table that will change the security situation in the next three to six months. The president’s remarks were met with a sharp response from the Taliban, who warned that any military change in the next six months was the responsibility of Afghan government leaders.

The eastern provinces of the country have also witnessed many security incidents. According to statistics, Nangarhar, Kunar, Laghman and Nuristan provinces witnessed 266 clashes, 76 explosions and 16 direct attacks on civilians in the past two and a half months. At least 1,764 people were killed in these incidents. Paktia, Paktika, Logar and Khost provinces were also uneasy and witnessed heavy clashes between security forces and Taliban fighters. According to the agency, there were 252 clashes, 73 explosions and 14 acts of violence against civilians in these provinces and 1,246 people were killed in these incidents.

ACLED also said that the central district witnessed the least security incidents. According to the agency, there were 197 clashes, 44 explosions and eight direct attacks on civilians in Bamyan, Daikundi, Ghazni and Maidan Wardak provinces. At least, 1,382 people were killed in these provinces. Thus, the least security cases have occurred in Kabul and northern Kabul. There have been 126 clashes, 55 explosions and 26 direct attacks on civilians in these areas. Also, 833 people have died in this area during this period.
This comes even as the Interior Ministry spokesman Mirwais Stanekzai told Hashte Subh daily that the Taliban had “sharply” escalated violence during the holiday, unlike in the past. He added that the Taliban had harmed civilians during the attacks and had often attacked civilians. However, he emphasized that the security forces were now tasked with stepping up their offensive operations and clearing the provinces of the Taliban. He referred to the president’s remarks and said that the security situation would change in the next three to six months. 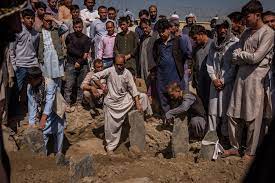 On the other hand, CIA Director William Burns too said that Taliban forces are likely “in the strongest military position that they’ve been in since 2001,” as U.S. troops withdraw from Afghanistan. In an interview with National Public Radio that aired on Friday, Burns acknowledged that it’s possible that the Afghan government could fall as the Taliban advances. But he also said that Afghan officials have the capabilities to fight the Taliban forces. “The big question it seems to me and to all of my colleagues at CIA and across the intelligence community is whether or not those capabilities can be exercised with the kind of political willpower and unity of leadership that’s absolutely essential to resist the Taliban,” Burns told NPR.

“The trend lines are certainly troubling, I don’t think that that should lead us to foregone conclusions, or a sense of imminence or inevitability,” he added. U.S. military officials have already started removing troops from Afghanistan, and the Biden administration plans to complete its withdrawal by September. But as U.S. military presence recedes, it appears that the Taliban is quickly gaining strength.

With the growing violence, India on Saturday reiterated its security advisory for Indian nationals in Afghanistan. “Security situation in Afghanistan remains dangerous in several provinces. Terror groups operating in Afghanistan have escalated violent activities including targeting of civilians. Indian nationals are not exceptions, and they additionally face a serious threat of kidnapping,” the statement read.

“All Indian nationals visiting, staying and working in Afghanistan are advised to exercise at most vigilance and caution with regard to security at work place, place of residence and also during movement to their places work. It is recommended that all types of non-essential movements be avoided. Movements especially during peak commuting hours should also be avoided. While traveling on roads maintain distance from possible targets like military convoys, vehicles of government ministries, offices, high ranking officials, law enforcement agencies, and avoid visiting crowded markets, shopping complexes, restaurants and other public places. All essential movement may please be kept as discreet as possible traveling outside the main cities should be strictly avoided. All Indian nationals arriving in Afghanistan are advised to register with the embassy consulates on the website. Indian companies operating in Afghanistan are advised once again to make special security arrangements in respect of their Indian employees deployed at their project site. The statement also mentioned and gave special attention to members of the Indian media traveling to Afghanistan to cover events through ground reports. As recent tragic events showed, it is essential that all Indian press persons covering events on the ground established contact with the public affairs and security wing of this embassy for a personalized briefing including specific advice for the local they are traveling to. This will not only help mediapersons make a better assessment of the risks involved, but also make it easier for the embassy to render speedy assistance if needed,” the statement read.

Also, in an interview with Fox News’ Brian Kilmeade, Gen. Jack Keane (Ret.) explained the “failure” by the Biden administration that resulted in the Taliban making advances in Afghanistan after the U.S. announced a withdrawal of troops. He warned that Taliban will exert pressure on key cities in the coming weeks. “There is a possibility here with the momentum that the Taliban have gained largely due to lack of U.S. presence, particularly air power and robust intelligence capability. That is a possibility, certainly, that the Taliban is going to take control. Certainly, President Biden, when he made the decision to pull all U.S. forces out, does not want the Taliban to take control and al Qaeda and ISIS to resurge, which we know would likely happen,” said Keane.

“But what they failed to do is put in place a good transition and strategy to deal with the situation without those 2,500 U.S. forces on the ground. So, we have a huge problem on our hands. Taliban at some point is going to exert pressure on those capital cities. They may wait until the 31 of August when U.S. forces are officially out. I think they’ll probably start to move before that,” he added.

However, our other neighbor, Moscow expects that no one will dare embark on any sort of aggression against members of the Collective Security Treaty Organization (CSTO), taking advantage of the current situation in Afghanistan, Russian Foreign Minister Sergey Lavrov said at a webinar on Russia’s foreign policy. “Our position, as well as that of our Central Asian neighbors, is that all obligations within the CSTO remain in full effect. We certainly do hope that nobody will dare test the Collective Security Treaty and try to carry out aggressive actions against any of its members,” he emphasized.

Moscow also believes it essential to make sure that the situation in Afghanistan poses no threat to its partners, Kremlin Spokesman Dmitry Peskov told reporters. “It is important for us to make sure that everything that is occurring in Afghanistan poses no threat to the borders of our partner countries, first and foremost, Tajikistan,” he said. But, he added that Russia has no plans yet to remove the Taliban from its list of banned organizations. “There is nothing new on the matter. If there is any news, we will let you know,” he said in response to a question. “Indeed, the Taliban movement is a tangible and quite a powerful force active in Afghanistan,” Peskov added. What is pertinent to note is that Russian Foreign Minister Sergey Lavrov said earlier that resolving the situation in Afghanistan required an inclusive dialogue involving all of the country’s political and ethnic groups, including the Taliban, and Russia was focused on that goal.

This comes even as President of Tajikistan Emomali Rahmon held a phone conversation with Russian President Vladimir Putin. The situation in Afghanistan was considered among other issues. The Presidents agreed to further coordinate actions in connection with critical development of situation in that country.

In related news, the Permanent Representative of the Kyrgyz Republic to the UN and other international organizations in Geneva A. Beishenaliev met with the Chief of staff of the International Organization for Migration (IOM) E. Ambrosi. During the meeting, Beishenaliev emphasized on the issues of migration of Kyrgyz. The parties also discussed topical issues of bilateral cooperation between Kyrgyzstan and the IOM, the current situation with ethnic Kyrgyz groups living in the Great and Little Pamir in Afghanistan and future areas of cooperation in the field of protection of the rights of migrants.