Kabul: The next meeting of high-level delegations from both the Islamic Republic of Afghanistan and the Taliban will take place at the beginning of next month, sources close to the negotiating teams in Doha said.

The first meeting was held on July 16 and lasted for two days, during which delegates agreed to continue their meetings and expedite the peace efforts. However, attendees failed to reach an agreement on a ceasefire. The sources said that efforts will be made through these meetings to achieve a framework for peace talks as the withdrawal of US and coalition forces is expected to be completed by the end of August.

The efforts for peace come as fighting continues on multiple fronts that have led to the fall of a large swath of territory to the Taliban. Abdullah Abdullah, head of the High Council for National Reconciliation, in an interview with Al Jazeera, said the conflict in Afghanistan has no military solution. “Since we think that peaceful settlement is much, much better option than the continuation of the war, we will continue to make these efforts,” Abdullah said. 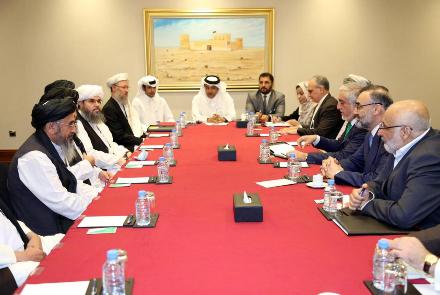 Meanwhile, the Peace Negotiation Team of the of Afghanistan on Monday morning tweeted that the chief negotiator of the Islamic republic of Afghanistan and some team members met Thomas Nicholson, EU Special Envoy for Afghanistan on Sunday afternoon. Both sides discussed the ongoing peace talks, the progress and obstacles that exist.

Mohammad Masoom Stanekzai, head of the negotiating team, while emphasizing on the strengthening of national political consensus, said that the international and regional consensus on Afghanistan peace process is one of the main factors influencing the peace process progress. He also emphasized that the global unified and coordinated support and position and their common narrative for Afghanistan peace will move this process forward. The head of the negotiating team said that considering the current violence and conflict in the country and according to the demand of the Afghan people, peace talks should be accelerated. He added that the presence of a facilitator or mediator between the two sides would advance the progress in the current negotiations. He further affirmed that both sides should use the available opportunities to use effective mechanisms for result-oriented negotiations.

The head of the Negotiating team, while emphasizing a common political future for both sides for a prosperous and stable Afghanistan, affirmed the joint efforts and flexibility of the both sides. The chief negotiator also mentioned the recent visit of high-ranking officials of the Islamic Republic of Afghanistan to Qatar, saying that this visit showed the strong will of the Afghanistan political leadership for lasting peace and stability in the country.