Kabul: US secretary of state Antony Blinken on Wednesday said that the US and India discussed regional security issues including Afghanistan, echoing Indian External Affairs Minister S Jaishankar’s remark that there was much more convergence on the matter than divergence. Blinken stressed that both sides are committed to the proposition that there is no military solution to the conflict.

“There has to be a peaceful resolution that requires the Taliban and the Afghan government to come to the table and we both agree, I think, strongly that any future government in Afghanistan has to be inclusive and fully representative of Afghan people,” said the top US diplomat, adding that it has to be “Afghan-led and Afghan-owned peace process.”

The Taliban have been rapidly making advances in Afghanistan after US troops started withdrawal from the war-torn region. But Blinken said that the US remains engaged in Afghanistan through important programs that support the country economically through development and security assistance. “We are very much engaged in the diplomacy of working to bring parties together at the table for the resolution of the conflict in Afghanistan,” he added.

The high-level meeting between India and the US takes place at an important juncture when key global and regional challenges need to be effectively addressed, said Jaishankar during his opening remarks at the press conference.

Underlining the importance of peace negotiations in Afghanistan, Jaishankar spoke against the unilateral “imposition of will” in the war-torn country while calling for preserving the gains made over the past two decades. Jaishankar said, “The gains to Afghan civil society, especially rights of women, minorities and social freedom — over the last two decades are self-evident. Afghanistan must never be home to terrorism, nor become a source of refugees.”

Jaishakar made these remarks in the presence of Blinken, who is on his first visit to India after assuming office. He will also meet Prime Minister Narendra Modi later on Wednesday evening. This remark comes amid stalled intra-Afghan negotiations and the Taliban’s growing grip over the war-torn country. The minister said it is essential that “peace negotiations are taken seriously by all parties.”

“The world wishes to see an independent, sovereign, and democratic Afghanistan, at peace with itself and its neighbors. But its independence and governance will only be ensured if it is free from malign influences,” he added. Jaishankar said that “unilateral imposition of will” by any party “will obviously not be democratic” and can never lead to stability. “Nor such efforts can ever acquire legitimacy.” 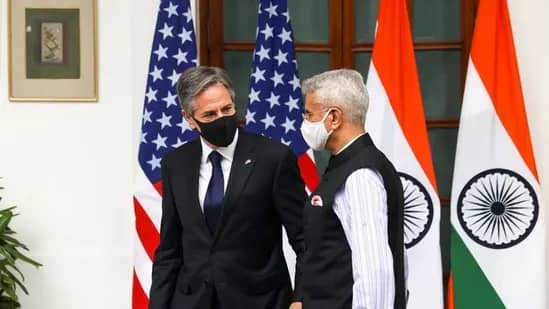 Blinken also held talks with National Security Advisor Ajit Doval on a range of bilateral and regional issues, including rapidly changing situation in Afghanistan, Indo-Pacific and global security. They also discussed strategic issues of importance in security, defense, economic and technology-related sectors. Both Blinken and Doval exchanged views on contemporary and futuristic issues related to regional and global security.

Blinken arrived in India on Tuesday for two days and is expected to lay the groundwork for the Quad (India, Japan, Australia, the US) summit later this year in the US.

Meanwhile, Ambassador M. Ashraf Haidari called on Sri Lanka’s newly appointed Minister of Finance Basil Rajapaksa on July 27. The Minister was accompanied by his senior staff and Additional Secretary Ambassador Pakeer Amza of the Ministry of Foreign Affairs. The two sides had a wide-ranging discussion on the status of growing bilateral relations between Afghanistan and Sri Lanka, potential areas of cooperation between the two sides’ Ministries of Finance, as well as an assessment of the recent security developments in Afghanistan with far-reaching implications for regional stability.

Both sides agreed that the Taliban and their affiliated regional and transnational terrorist networks not only destabilize Afghanistan, victimize its suffering people, and try to undo the country’s hard-won gains of the past two decades but they also pose a threat to the stability and security of every nation in the region. Ambassador Haidari noted that the international community, including Afghanistan’s near and extended neighbors, should tangibly support the government and people of Afghanistan. The Ambassador thanked the government of Sri Lanka for its consistent support of the Afghan peace process and for its repeated call on the Taliban to end its attacks on civilians and to engage in meaningful peace talks.

Iran’s Special Representative for Afghanistan Mohammad Ebrahim Taherian Fard said on Tuesday that Iran is eager to strengthen cooperation between Kabul and Tehran in various fields, including border cooperation. Taherian Fard made the remarks in his meeting with Afghan Foreign Minister Mohammad Hanif Atmar. Appreciating the positions of the Islamic Republic of Iran in supporting the peace process, Atmar explained about an end to the violence and arbitrary killings, torture of civilians, and human rights abuses in Taliban-held areas.

He announced the support of the Islamic Republic of Iran for the peace process in Afghanistan while preserving the achievements of the last two decades, saying that Iran is eager to further strengthen cooperation between Kabul and Tehran in various fields, including border cooperation and to establish more coordination between the relevant departments of the two countries.