Kabul: UN Special Representative for Afghanistan Deborah Lyons on Wednesday said that she does not see the Taliban as a partner without progress in peace talks and preventing human rights abuses.

During her opening remarks at the special joint coordination and monitoring board (JCMB) meeting held at the Presidential Palace on Wednesday the UN Special Representative stressed that peace talks must be initiated in a serious and honest way to address Afghanistan’s long-standing issues. The United Nations has said that the purpose of the special meeting of the JCMB is to recognize the current crisis in Afghanistan by international donors, as well as to make sure they are confident of the Afghan government’s strategic vision for managing the crisis. Lyons noted that the only way to resolve the Afghan issue is to speed up peace talks that can be vigorous and honest.

Meanwhile, she reiterated that the Taliban’s increase in violence and war has put responsibility on the group. She added that the world is closely monitoring how the group acted. She also reiterated that the main international donors do not support the repression of women, discrimination against minorities, denial of girls’ education or the precepts of an authoritarian state.

The UN Special Representative for Afghanistan said that 18 million Afghans desperately need humanitarian assistance and that their needs should be prioritized. Meanwhile, the organization called on the government and international support to address the needs of these people.

Lyons added that the United Nations continues to provide humanitarian assistance in the country as a civilian body alongside the Afghan people and those in need. “The issue on our agenda of preserving the gains has never been more urgent nor indeed more challenging. Our job today is to set a course to the Senior Officials Meeting in November that will lead to renewed support for the Afghan state. But let us be frank, with one another, today: while the partnership is strong and the commitment from both sides – Government and the International Community – remains sincere, the transformational effort that is underway is itself is in crisis. Donors in particular will seek to be reassured from the government today that it recognizes the nature of the crisis and that it has a strategic outlook that addresses the current, worrying circumstances,” she said during the ceremony.

Stressing on the ways to move forward, Lyons said, “We need to address first the immediate humanitarian crisis, as well as come up with a medium-term strategy that restores Afghanistan to its original positive pathway towards sustainability and self-reliance, that everyone in this room has worked so hard to create. In both of these discussions, the reality must be faced: With the territory they have taken the Taliban have inherited responsibilities. The world is watching closely how they are acting, especially towards civilian populations, women, and minorities. The Taliban have gained a certain legitimacy in recent years through their negotiations in Doha, but this legitimacy is premised on their commitment to a political negotiation with the Government of Afghanistan, a commitment which their battle-focused strategy casts into doubt. If there is no movement at the negotiating table, and instead human rights abuses and worse still atrocities occur in districts they control, the Taliban will not be seen as a viable partner for the international community.”

“To address Afghanistan’s longer term issues peace negotiations must proceed in earnest and with real sincerity so that a sustainable, inclusive, and equitable peace can be reached. The world has now recognized that the Taliban must be a partner in Afghanistan’s transition to self-reliance. International donors have signaled their willingness to continue to support Afghanistan after a peace agreement is reached,” she added.

Ghani stressed at the meeting, “The war waged by the Taliban has no religious dimension; this is a war for power and sovereignty. At the same time, he stressed that the war in Afghanistan is not a civil war, but a war between terrorist networks.”

The president said that the people want peace and that our neighbors’ benefit is in the peace and stability of Afghanistan. Ghani added that the Afghan government has never asked NATO and the United States to reconsider their decision to leave Afghanistan. Ghani also stated that with the departure of NATO and the United States, Afghanistan has entered a new chapter in relations with the world and he is happy about this. “Our constitution is the most Islamic constitution in the world,” the president said, emphasizing the Islamic constitution of Afghanistan.

Ghani also said at the meeting that most of the country’s resources are used by the Ministry of Interior and Defense, which intends to reduce the additional spending of these ministries for more management. On the other hand, Abdullah Abdullah, chairman of the High Council for National Reconciliation, said at the meeting that the increase in violence had a negative impact on people’s lives and that the peace process in Doha is not proceeding as quickly as expected.

Abdullah also stressed the importance of women’s rights, including the right of women and girls to education in peace talks. Abdullah stated that if one side believes that a military solution to the Afghan crisis will be found, they will not achieve anything.

Abdullah said that peace is a great opportunity and the Taliban should not miss it. “With the start of the peace process, there was a lot of hope of reaching an agreement,” Abdullah told a special meeting of the Joint Monitoring and Cohesion Board on Wednesday. “Unfortunately, this did not happen as we expected. Peace is now a great opportunity. We call on the Taliban not to miss this opportunity to get through the war and achieve security and development.” 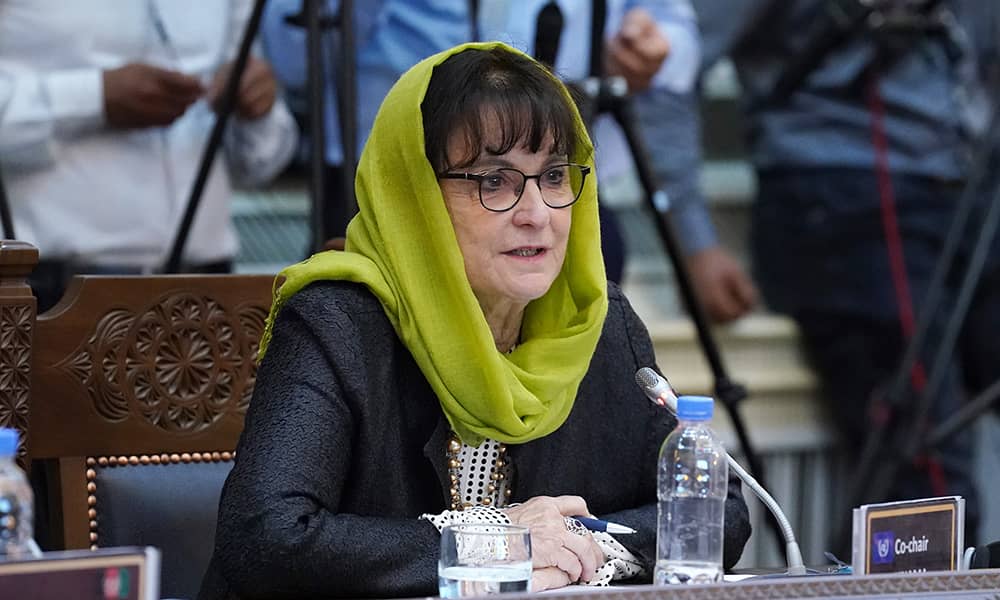 He added that peace in Afghanistan also means peace in the region and the world, and for that reason, establishing peace requires the serious cooperation of the international community and the countries of the region.

Abdullah said Afghanistan and the international community had made great sacrifices to shape the current structures, the constitution, the security forces and democracy. According to him, the people of Afghanistan want to elect the leader of the country of their own free will, and the government is emphasizing these achievements in the peace process. He said the continuation of the war only adds to the suffering of the Afghan people and pushes the country backwards. There is no other solution without dialogue and peace, he said.

Abdullah also expressed hope that the international community’s assistance to Afghanistan would continue and that the achievements of the past 20 years would be preserved.

Also, EU voiced its concern about the increase in civilian victims – particularly women and children – in Afghanistan, at the JCMB. “The EU calls for full investigation into targeted killings against media and CSO representatives. The Afghanistan Partnership Framework, agreed between international partners and government, encompasses core principles – on human rights, gender equality, anti-corruption and open civic space. The EU’s support will remain conditional on core principles and key reforms in the APF,” it said in a statement.

The EU representative for Afghanistan also said that the Afghan government recognizes civil society and the media as its strategic partners in achieving peace, freedom and an open society. EU Ambassador to Afghanistan Andreas von Brandt also said at the meet that the government should make the protection of women and girls’ rights a priority. “Under Afghan law, government agencies must be able to operate freely,” Brant said. The EU Representative in Afghanistan also called on the Afghan government to effectively fight corruption with the support of civil society.

He added that the delegation met with Chinese Foreign Minister Wang Yi, Deputy Foreign Minister and Special Representative for Afghanistan. According to Mohammad Naeem, peace, political, economic and security issues were discussed during the meetings. The spokesman for the Taliban’s political office said the group had assured China that Afghan territory would not be used against the security of any country.

He stressed that China also continues to cooperate with the Afghan people. Mohammad Naeem added that China has assured that it will not interfere in Afghanistan’s internal affairs.

Meanwhile, the Afghan Foreign Ministry reacted to the visit of the Taliban delegation. In a statement released it said, “The Government of the People’s Republic of China recently informed the Ministry of Foreign Affairs of the Islamic Republic of Afghanistan that a Taliban delegation is supposed to visit China. The invitation is intended to express China’s concern about the security situation in Afghanistan, the presence of foreign fighters and terrorists alongside the Taliban, and the Chinese government’s support for peace talks and a political agreement. During the meeting, the Chinese government expressed its deep concern over the recent Taliban attacks, which have resulted in the increasing killing of innocent people and the displacement of tens of thousands of people, and called on the Taliban to accept a political solution and cut ties with regional terrorists. Given the common security threats and common political and economic interests, and in light of recent talks between the two presidents and foreign ministers, the Islamic Republic of Afghanistan expects the Chinese government to strengthen regional consensus and put international pressure on the Taliban to end the violence, establish a ceasefire, ensure peace and end the presence of foreign terrorists in Afghanistan, and play a valuable role.”