Kabul: The Taliban have carried out attacks in some areas around the city of Herat since midnight on Wednesday. Local officials in Herat confirmed that Taliban attacks in the Pul-e Malan area have been repulsed by security forces.

At the same time, on Thursday, the scope of the clashes reached around the industrial town in Guzara district of Herat. Popular uprising sources said that Andisha, a residential area close to the industrial town, witnessed fighting between the Taliban and security forces.

Herat Industrial City is located near the airport of the province. Sources said that flights to Herat Airport have been canceled following clashes around the industrial town.

Heavy clashes have also been reported in the Siavoshan area of Guzara district in Herat. Scattered clashes in Herat’s Guzara district have caused a number of residents to flee their homes. Local officials in Herat have confirmed clashes in Guzara and Karkh districts, claiming heavy casualties among the Taliban.

In other news, a number of Afghan women have issued a joint statement urging the Taliban not to use women as slaves. The statement, read on Thursday at a news conference by a number of Afghan women civil and political activists in Kabul, said that the Taliban should not pressurize women into forced marriages. The statement stressed that the parties to the war in Afghanistan must accept immediate, permanent and unconditional ceasefire as soon as possible, and that the Taliban must end the killing of civilians and targeted assassinations. 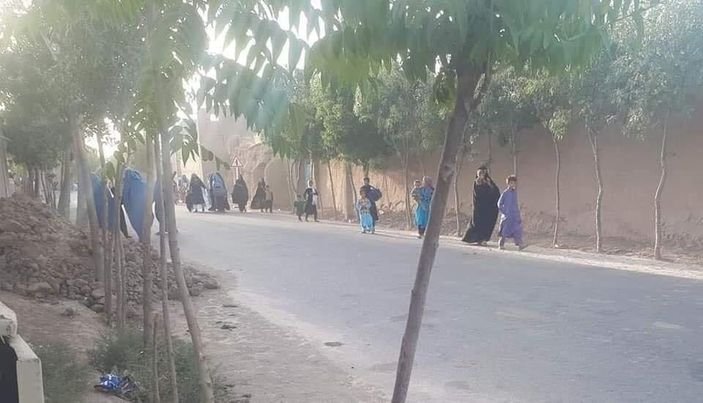 Afghan women have also called on the Taliban to refrain from war crimes, desecration of the bodies of those killed, prisoners and wounded, damage to human dignity, destruction of public property and infrastructure, and forced displacement. They added that the group should cut all ties with other terrorist groups, including al-Qaeda, ISIS, Lashkar-e-Taiba and Jaish-e-Muhammad.

They also called for efforts to build trust between the government and the nation, a political consensus with political leaders, both men and women, within Afghanistan, countries in the region and world powers for lasting peace and a system based on the will of the Afghan people and speed in peace negotiations. The statement said that there was no winner in the war and that Afghanistan’s history had shown that gaining power through war would not be sustainable and would not be universally accepted. Addressing the Taliban, Afghan women have said that the opportunity for a meaningful peace and political solution with the support of the countries concerned in the Afghan issue has now been provided through negotiations and there is no excuse for them to continue their war.