Kabul: Security sources said that a policeman was killed and 12 members of the security forces were captured as a result of a Taliban attack on a security checkpoint in the Guzara district of the province.

A senior security source told Subhe Kabul daily that Taliban fighters attacked a police and public security checkpoint in the Pul-e-Malan area of Guzara district in Herat province on Wednesday night. According to the source, following the attack by Taliban fighters, Gholam Siddiq, the director of the operation, went to the area with several security soldiers to help the area, and after several hours of fighting, they retreated from the checkpoint.

The source added that the clashes between the two sides continued until 02:00 on Thursday morning and finally, this security checkpoint was set on fire by Taliban fighters. The source said that during the clash, one policeman was killed and the director of the operation, two national police soldiers, six public security policemen and three public protection forces were captured by Taliban fighters. The Taliban have not yet commented on the matter. 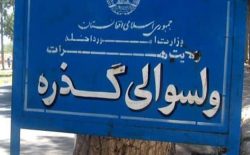 Meanwhile, Amrullah Saleh, the first vice-president, has said that the violence had made the international community mobilize in support of human values and rights. Saleh wrote on his Facebook page on Thursday that at a special meeting of the Joint Coordination and Monitoring Board (JCMB), representatives of the international community expressed their support for the Islamic Republic of Afghanistan and stressed on the need for continued assistance.

At the same time, he said, representatives of the international community have condemned the killings and violence perpetrated by the Taliban and called for meaningful dialogue. Saleh said, “I said at the beginning of my speech that the Taliban had a political miscalculation. Suppose that if the Taliban had not ridiculed the peace talks, the United Nations would have thanked them today in its declaration.”

He added that the Taliban did not understand human values and did not recognize human rights. Referring to the Taliban’s mistreatment of Kandahar’s local comedian Mohammad Khasha, the first vice-president said, “Playing and filming Khasha’s young body shows that the Taliban is no more than a savage in terms of intellect.”

Also, Mohammad Mohaqiq, a senior adviser to the presidency, too said that Taliban insurgents are committing war crimes and shooting civilians in Hazara areas. Mohaqiq wrote on his Facebook page on Thursday that two nights ago, Taliban fighters captured and shot four civilian workers in the Dar-e-Suf district of Samangan province. Mohaqiq called on the United Nations and Human Rights Watch to investigate and condemn the Taliban for their crimes against humanity against Shiites and Hazaras.