Kabul: The Ministry of National Defense announced the advance of security forces in Nijrab district of Kapisa province. Officials at the ministry emphasize that most areas in the district have been cleared of Taliban insurgents.

Aman stated that 21 Taliban fighters were killed in the operation. The Taliban have not yet commented.

Also, the Takhar Police has announced that the Taliban attacked areas around the city of Taloqan, the capital of the province, at night, but the attack was repulsed due to the resistance of the security forces. Khalil Asir, spokesman for the Takhar Police, told Hashte Subh daily that the Taliban attacked the areas of Qara Parchab, Salakhi Qeshlaq, Khaskapa Wa Choobar around Taloqan, the capital of Takhar province, on Thursday night.

However, the Balkh police said that at least five people have been injured in a roadside bomb explosion in Mazar-e-Sharif. Adel Shah Adel, a spokesperson for the Balkh police, told RFE / RL last evening that an explosion had taken place on a fuel tank in the Karte Zaraat area of Mazar-e-Sharif city. “The reason is not clear. It may be carried out by the abductors of Abdul Rauf, the kidnapped boy that his father was near the scene.”

According to Adel, among the wounded were four bodyguards, Mohammad Nabi, Abdul Rauf’s father, and a taxi driver. Nabi attributes the incident to his son’s abductors. Last week, a car bomb exploded on a car carrying Mohammad Nabi, killing three people and wounding six others. Abdul Rauf has been held hostage by the kidnappers for about ten months now, and efforts to free him have been unsuccessful. 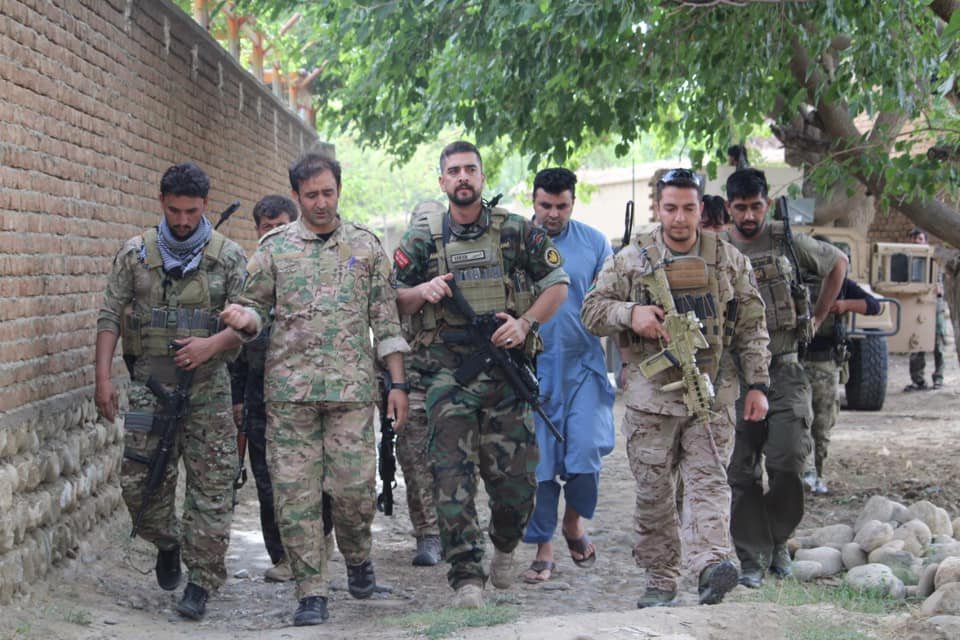 According to him, as a result of the first incident in the village of Hotqul, an eight-year-old girl named Nabila died and her father, Ziaullah, was injured. Yousefi said that a person named Sayed Nader also died as a result of the second incident in Sadat village. The Ghazni provincial council member said that mortar shells by Taliban fighters had hit the same areas in the past.

Meanwhile, security sources said that some areas in Guzara and Karukh districts of Herat have fallen to Taliban militants.

According to the source, following the attack, the Guzara district police headquarters fell to the Taliban and its forces retreated to the aiport road.

The source says that last night, the Khaf railway line checkpoint also fell to the Taliban.

The source added that the security forces of Karukh district’s guard unit evacuated the dam at around 07:45 on Friday night due to Taliban threats and retreated to Herat city.

On the other hand, the Ministry of Interior said in a statement that as a result of the operations of the defense and security forces in Herat province, many areas have been cleared of Taliban fighters and heavy casualties have been inflicted on the members of this group.

Fawad Aman, the deputy spokesman for the Ministry of Defense, tweeted on Friday night that the Guzara district in Herat had been cleared of the Taliban.

Meanwhile, commemoration of the National Flag Day in Khost province came under an armed attack. According to local sources, two people were killed and more than 30 were injured in the incident, which took place on Friday evening. The 203rd Thunder Corps in the east of the country announced that the incident took place in Yaqubi district of Khost province.

The corps said the attack was carried out on a public ceremony held near a security base. The victims of this incident are civilians. Akbar Khan Zadran, Yaqubi district governor of Khost province, said two army soldiers were among the wounded. No individual or group has claimed responsibility for the attack.

In other news, according to the Supporting Open Media in Afghanistan-Nai, the Taliban have looted the equipment of the radio station (Saday Deh Rawood) and destroyed its building after occupying the Deh Rawood district of Uruzgan province. A statement issued on Friday quoted Ahmad Shah Sahel, a spokesman for the Uruzgan governor, as saying that the Taliban had taken their belongings to Helmand province after destroying the Radio station.

Nai once again called on the warring parties to prioritize the preservation of journalists’ lives and media structures. Nai has called on the Afghan government to pay attention to the protection of media structures. The statement called on the international community, especially those at the negotiating table, to inform the Taliban about the issue of preserving the media infrastructure and the lives of journalists, so that the group can take this into account. According to Nai, the Taliban have already looted Radio Tanin equipment and silenced the media forever after capturing the Shindand district of Herat. The Taliban have not yet commented

Also, for the past 20 days in Kandahar City, fighting between the Taliban and security forces has been going on and as a result of these clashes, thousands of families have been displaced in Kandahar and about 700 civilians have been killed and injured. In addition, historic sites and monuments in Kandahar, which is mostly in Taliban-controlled areas, have been destroyed or severely damaged.

Hekmatullah Afghan, head of information and culture of Kandahar province, told Hashte Subh daily that these religious and historical sites all portray the history and identity of Afghanistan, but unfortunately are in danger of destruction as the war intensifies in Kandahar. Kandahar has also been the center of many political developments. Mohammad Ibrahim, a historian in Kandahar, says that Afghanistan is known for its historical monuments, and called on the government and the Taliban to stop fighting in the area of historical sites and not to damage Afghanistan’s identity and knowledge. A number of Kandahar residents are also concerned about the continuation of this situation and call on both sides of the war not to destroy historical monuments.

This comes even as the United Nations Office for the Coordination of Humanitarian Affairs (UNOCHA) in Afghanistan said in its latest report that more than 700 civilians, including women and children, had been killed and wounded in two weeks of clashes between the Taliban and security forces in Kandahar.

The United Nations Assistance Mission in Afghanistan (UNAMA) is deeply concerned by escalating violence in and around Kandahar amidst ongoing Taliban attacks on city. It said that more than 230 civilians injured since July 16 and called on parties to exercise maximum restraint and take all possible measures to protect civilians from further harm. The Mission warns of the grave consequences to civilians in Kandahar if the fighting continues and intensifies in urban areas of the city.