Kabul: The Ministry of Interior on Saturday announced that Taliban offensive in three major cities had been repulsed. The Taliban on Friday night attacked the cities of Herat in the west and Kandahar and Lashkar Gah in the south of Afghanistan.

Interior Ministry spokesperson Mirwais Stanekzai said that security and defense forces are advancing in the cities of Herat, Kandahar and Lashkar Gah. He said that the Taliban had suffered the most casualties in the three cities overnight. He did not provide specific figures for Taliban casualties.

Stanekzai said that the enemy’s plan had failed due to good security presence in the city and its suburbs as a result of the resistance of the security and defense forces, especially the air force and the special police unit.

According to him, the city of Herat is currently protected from high-profile threats, and the Taliban’s casualties in Herat last night were higher than the group’s casualties throughout Afghanistan. The spokesman for the Interior Ministry said most parts of Injil and Guzara districts near the city of Herat are also under the control of security and defense forces.

Regarding the city of Kandahar, Stanekzai said that serious security measures and special attention have been taken for the city of Kandahar and there is a serious focus on this city. He stressed that the Taliban attacks on Kandahar had met with strong resistance from security and defense forces. Stanekzai said security and defense forces are advancing on Kandahar City and that the city would soon be completely cleared of the Taliban. According to the spokesperson for the Ministry of Interior, the Taliban in Lashkar Gah city of Helmand province also suffered a serious defeat and the group suffered heavy casualties.

“Security belts have been strengthened for the safety of Lashkar Gah,” he said. According to Stanekzai, the security and defense forces assured the people that they will not allow the enemy to advance. The Taliban claimed yesterday that they had taken control of Guzara and Injil districts in Herat province. The defense and interior ministries at the time denied the allegations. The Taliban have also claimed to have killed government troops during clashes in the cities of Herat and Lashkar Gah.

Also, local sources in Helmand province said that clashes have intensified in parts of Lashkar Gah, the provincial capital. Ataullah Afghan, a member of Helmand Provincial Council, told Subhe Kabul daily that a hospital in Lashkar Gah had been destroyed in clashes on Saturday. According to him, the clashes in Lashkar Gah city have intensified for the past four days, and currently the clashes are taking place in the sixth, seventh, eighth and ninth PDs of the city. Afghan said that the Taliban hid in a civilian hospital on Saturday morning, and security forces launched an airstrike there, destroying the hospital building. Afghan added that on Friday, three civilians were killed and five others were injured when a car carrying civilians hit a roadside mine in Lashkar Gah.

This comes even as President Ashraf Ghani held a consultative meeting with political and jihadi leaders at the Presidential Palace. A statement issued at the end of the consultative meeting by the Presidential Palace said that the courage and resilience of the Afghan security and defense forces against “aggression” and terrorist attacks and the national resilience and mobilization of the Afghan people in this regard is commendable. 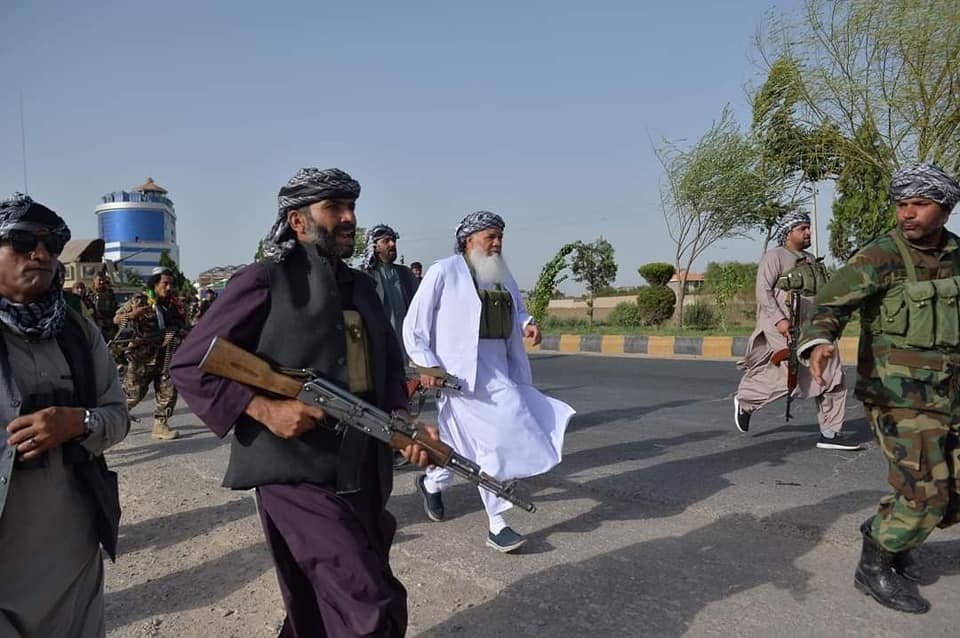 The statement, released on Saturday states that ending the war and achieving a just and lasting peace is the priority of the Islamic Republic of Afghanistan and that many sacrifices have been made to achieve this goal. According to the statement, the efforts of the High Council for National Reconciliation and the Peace Negotiating Committee in this regard are commendable and the process of peace talks will continue.

According to the statement, the defense of the people and territorial integrity of Afghanistan, national institutions, common values, women’s rights and other rights and freedoms enshrined in the Afghan constitution, is the responsibility of the government and the Afghan government in these values defends against any kind of aggression. President Ghani wrote on his official Facebook page that prominent political leaders, jihadi leaders, representatives of civil society, women and religious scholars have all unanimously declared their support for the country’s armed forces in the presence of the leadership of the security and defense sectors. Ghani wrote that everyone under the umbrella of the republic emphasized the provision of peace and said in unison that “legitimate defense is our right.”

Also, Mohammad Qasim Halimi, the country’s Minister of Hajj and Religious Affairs, said that those religious scholars who do not offer the funeral prayers of the security and defense forces and reinforce “the enemy against the nation” should be repressed and imprisoned. Speaking at a news conference in Kabul on Saturday, Halimi said that these religious scholars are those who receive salaries from the government and work to strengthen the Taliban.

He also said that following the fall of several districts, a number of these scholars were trying to get closer to the Taliban. The Minister of Hajj of the country called these religious scholars “vile”, “evil” and “cowardly”. He added, “We (the government) will bring down all the devils who have dressed in religious clothes.”

Meanwhile, in other news, Uzbekistan and Japan exchanged views on the current situation in Afghanistan and on the promotion of the political peace process in the country, Trend reports with reference to the press service of the Ministry of Foreign Affairs of Uzbekistan.

The mentioned issue was during the meeting between the special representative of Uzbekistan for Afghanistan Ismatulla Irgashev and the Ambassador Extraordinary and Plenipotentiary of Japan Yoshinori Fujiyama. During the meeting, the parties discussed the efforts of the two countries to expand cooperation in the Afghan direction, in particular, interaction in establishing long-term and sustainable peace in Afghanistan, as well as involving the country in regional integration processes.