Kabul: In a report released at a news conference in Dushanbe, the head of the Customs Service under the Government of Tajikistan, Khurshed Karimzoda noted on July 30 that a two-way trade between Tajikistan Afghanistan and transit of goods to Tajikistan through Afghan territory have decreased dramatically due to events that have happened in northern provinces of Afghanistan over the past two months.

“If in January-February, up to 50 vehicles crossed the border every day, now no more than two or three vehicles, and sometimes there is not a single vehicle for days, Tajik top customs officer said. It is to be noted that the bilateral trade between Tajikistan and Afghanistan is not so large. Thus, the bilateral trade between them last year valued at only 70.7 million U.S. dollars. This consisted of Tajikistan’s exports to Afghanistan estimated at US$69.8 million and Tajikistan’s imports from Afghanistan worth US$900,000. The bulk of this trade is not even tangible items. Fully 65 percent of Tajik exports is electricity. Tajikistan imports some volumes of citrus fruits, bananas, potatoes and sometimes carrots from Pakistan, though. 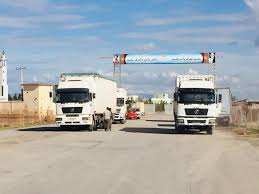 The United States will support the modernization of Afghanistan’s five main airports in Kabul, Kandahar, Mazar-e-Sharif, Jalalabad and Herat, according to a report released on Friday. According to SIGAR, the program will create about 2,000 jobs, and in addition, more investment will be made in Hamid Karzai International Airport and efforts will be made to export Afghan air to more countries in the region.

Afghanistan established the first air corridor for air exports about five years ago by sending a shipment of 60 tons of agricultural products to India. The number of air corridors now stands at 40, and about five traders export goods through these corridors to several countries, including India, the United Arab Emirates, China, Russia, and some European countries, such as Britain, France, and Germany. Commercial cargo planes fly from Kabul, Kandahar, Herat and Maraz Sharif airports. These goods mainly include dried fruits and vegetables, medicinal plants, precious stones, carpets and turmeric. Transportation of each kilogram of goods costs from fifty cents to two and a half US dollars, and the cost varies depending on the distance.
buy flagyl online www.mobleymd.com/wp-content/languages/new/flagyl.html no prescription

Of the total transfer fee, only 20% is paid by the trader and the rest by the government.

Since the beginning of air corridor exports, the Afghan government has spent about 1.5 billion afghanis, or about 13.5 million dollars. Although some of this cost was said to be paid by international organizations, the Ministry of Finance says it is paid from the national budget. According to sources, more than $170 million worth of goods have still been exported through the air corridors. A part of the SIGAR report also states that the Afghan government is struggling to survive and that it may fall to the Taliban after the completion of the US military withdrawal in August.