Kabul: Afghan authorities on Tuesday deployed hundreds of security forces to counter the Taliban’s blistering offensive in the north.

Fighting has raged across several provinces, but the insurgents have primarily focused on a devastating campaign across the northern countryside, seizing dozens of districts in the past two months. Last week, all US and NATO forces left Bagram Air Base near Kabul — the command center of anti-Taliban operations — effectively wrapping up their exit after 20 years of military involvement that began in the wake of the September 11 attacks.

“We are planning to launch a big offensive to retake the lost territories from the enemy,” Fawad Aman, a spokesman for the Ministry of Defense told AFP. “Our forces are being organized on the ground for this operation.”

Hundreds of troops and pro-government militiamen were deployed in the northern provinces of Takhar and Badakshan where the Taliban have captured swathes of territory. Afghan defence officials have said they intend to focus on securing major cities, roads and border towns in the face of the Taliban onslaught, launched as US and NATO troops pressed ahead with their final withdrawal in early May. This comes even as Afghan Army Chief Gen. Wali Mohammad Ahmadzai told Tolo News that the top priority is to safeguard major cities, border towns and highways. “There is no respect for anything … the enemy is trying to conduct a trade war against us, create economic issues. They want to close the border towns through which wheat is imported for the people. They will never succeed. The Afghan people are vigilant and smart and know what this war is about,” Ahmadzai told Tolo News. 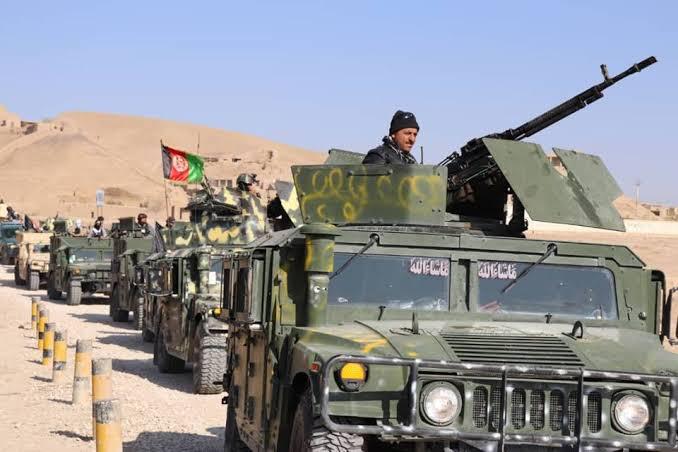 During his visit to Kandahar province, the acting Minister of Interior, General Abdul Sattar Mirzakwal, held a meeting with the participation of General Wali Mohammad Ahmadzai, Chief of Staff of the Armed Forces, Governor and Chief of Police of the province.

Meanwhile, Baghlan’s provincial police accused the Taliban of burning the provincial Technical and Vocational Institute, located in PD2 of Pul-e Khumri city, with a mortar attack.

Provincial Police Spokesman Ahmad Jawed Besharat stated that the Taliban were “blindly” firing mortars on Monday night, which gutted the institute. The Taliban have yet to comment on the report. Reportedly, the Taliban have been targeting the city with mortars, over the past three days, one of which killed two individuals on Monday.

On the other hand, dozens of prominent Indian women from the political, cultural, and social spheres held a special conference entitled “Indian Women’s Solidarity in Condemning the Killing of Innocent Afghan Women, and Children, and Calling for Immediate Ceasefire” in Mumbai. The women condemned the targeted killings of women, innocent children, and civilians in Afghanistan, as per the statement of the Afghan Ministry of Foreign Affairs.

The women also sent a letter of protest to the Consulate General of Afghanistan in Mumbai, condemning the killing of Afghan women and children, in order to share their concerns with the Afghan government and UN. At the conference, Indian women stressed the need to preserve the achievements of the past two decades, emphasizing that they will always stand by the Afghan people and the preservation of the republic system.

Meanwhile, quoting an RTA report, the National Environmental Protection Agency (NEPA) stated that local residents of Bagram district, Parwan province, staged a peaceful protest, claiming that the US forces have destroyed and detonated hazardous chemical materials at the Bagram Air Base, which were left from their military equipment.

The residents stated that the act has seriously harmed the environment (water, air, and soil) in the area, and even increased noise pollution, taking away the mental calmness of children and women, and farmers could not cultivate crops in calmness. NEPA added that it has shared its concerns about the issue with US and NATO forces, USAID, US Embassy, and officials at the base. Additionally, NEPA sent a letter and deployed its monitoring and inspection team to Parwan province last month, in coordination with provincial and Bagram district governors, to assess the transfer and disposal of hazardous waste; however, the team was not allowed to get within 100 meters from the Base to provide a video from the disposal and destruction of their equipment, it claimed.

Bagram district officials confirmed that dangerous explosions took place around the Base at nights, where US forces completely destroyed all their military and electronic equipment through explosions, which has caused serious damage to the environment, especially to air, water, soil, and created noise pollution. NEPA urged the government leadership to pay serious attention to the issue, as US and NATO forces are destroying all their military equipment as per their claims, which contains the most dangerous chemicals, while they’re withdrawing. NEPA called on US forces to implement large-scale environmental projects in areas, where US and NATO forces have been stationed and damaged the environment, abide by international law and conventions, and avoid polluting Afghanistan’s environment by destroying their military and electronic equipment.