Kabul: Deputy Interior Minister for Policy and Strategy Naqibullah Fayeq stated that the president has ordered the Ministry of Interior (MoI) to re-establish the Afghan Local Police (ALP) – also called Arbaki – within the MoI framework, as the force was the most effective in defending villages against the Taliban, and was disbanded last year.

Fayeq added that the ALP has no difference from the Afghan National Police (ANP), as they will be trained, follow military law, receive salary, and do their duty 24 hours; however, unlike the ANP, the ALP will be positioned in their own area and province, and thus, enjoy the support of locals.

Fayeq said that the security agencies can defend the country, as these agencies have the capacity to recruit tens of thousands of soldiers. Fayeq explained that on Tuesday, the cabinet welcomed people’s uprising forces in raising morale, but defending the country must be within the ANDSF framework and those who have motivation to fight the Taliban, should join the security agencies.

Fayeq added that the president also reported to the cabinet that special units were prepared to repel Taliban attacks and recapture the lost areas.

In other news, on the recommendation of Laghman’s provincial military council and in accordance with President Ghani’s instructions, and approval of the National Security Council, all personnel, weapons, and ammunition of the military base in Badpash district were successfully relocated to the newly designated location in the district, to help timely supply and equip the ANDSF, and prevent any problems. 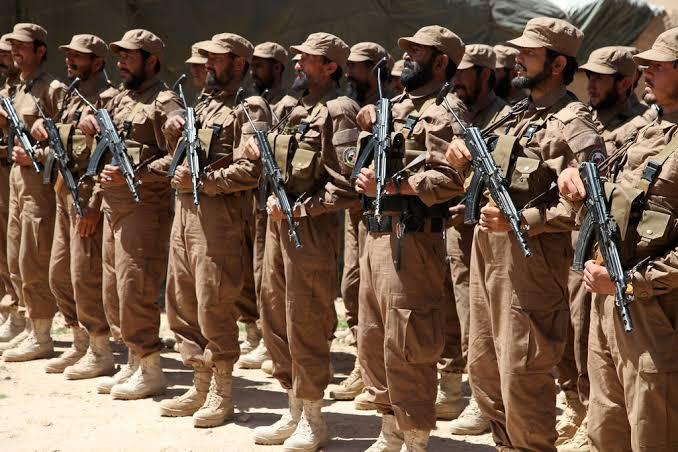 The military council assured the people in the province that the ANDSF are preventing any terrorist activities by the enemy day and night, in order to protect the people against their evil deeds. All decisions regarding the relocation of mobile and static bases is conducted after a thorough evaluation under the direction of the central government, with appropriate actions in military and civilian aspects. Also, reportedly, the ANDSF evacuated Ab Kamari and Muqur districts of Badghis province yesterday.

Meanwhile, talking to Etilaatroz daily, Badghis’s Provincial Governor Hesamuddin Shams reported that the Taliban have entered Qala-e Naw city, the provincial capital, and the clash is ongoing between the ANDSF and Taliban insurgents. Provincial council head Abdul Aziz Bek confirmed that heavy clashes are ongoing, and the lack of deployment of reinforcements has created panic in the city, whilst prisoners have escaped from the provincial central prison. In fact, Ministry of Interior said that ANDSF presence in and around Qala-e-naw city of Badghis province has been increased to defend the city. In fact, security forces launched airstrikes in the city of Qalano, the capital of Badghis. Abdul Aziz Beyk, head of the Badghis provincial council, told Salamutandar that security forces fighters had arrived in the province and were operating. The head of the Badghis provincial council added that the Taliban were fleeing as the air force arrived. The police headquarters and the national security department of Badghis province were cleared of the Taliban. Fawad Aman, deputy spokesman for the @MoDAfghanistan, confirmed the news, saying that the Taliban had suffered heavy casualties in the operation and that the group’s fighters were fleeing from Badghis.

In fact, First Vice-President Amrullah Saleh stated on his Facebook page that he is in contact with Badghis provincial National Director of Security Chief Mehrab Khan, Afghan National Army (ANA) Brigade Commander Hasibullah Khan, and Governor Hesamuddin Shams in Qala-e Naw city, Badghis province. Saleh said that the officials are brave and patient and called on citizens not to become enemy spokesmen.

Meanwhile, doctors at Badghis Provincial Hospital said that 12 people, including women and children, have been wounded and one has been killed in clashes between the Taliban & security forces in Qala-e-Naw, the provincial capital. Health officials have reported that four of them are in critical condition.