Kabul: Special Envoy of Qatar’s Foreign Minister for Counterterrorism and Mediation of Conflict Resolution Mutlaq bin Majed Al-Qahtani arrived in Kabul on Tuesday where he met a number of senior Afghan political leaders including former president Hamid Karzai to discuss how to expedite the stalled Doha peace talks.

The visit of the Special Envoy to Kabul comes as a group of politicians led by Abdullah Abdullah postponed a trip to Qatar for talks with the Taliban following an unprecedented escalation of Taliban attacks.

Danesh highlighted that the Afghan government has implemented all necessary measures to advance the peace negotiations, from releasing prisoners to deploying negotiation team to Qatar, but the Taliban not only left the negotiating table, but also emphasize on increasing violence and escalating war. Danesh warned that if the Taliban fail to comply with the peace talks and resort to violence, war and violence will continue in a different way, adding that reducing violence to build trust and accept a political solution to the Afghan issue is one of the basic principles for the peace talks, and all ethnic groups in the country want a just and lasting peace. Danesh also said that the Afghan government respects and emphasized the mediating role of Qatar and UN for the continuation of meaningful talks, in order to advance the process and break the deadlock. Given the importance of Qatar’s role in the peace process, Danesh stressed on the continued efforts by Qatar to help resume the talks and bring this process to a result.

Al-Qahtani explained the peace talks process in Doha and emphasized the need to resolve the Afghan issue through negotiations. Al-Qahtani added that his government and he himself told Taliban representatives that the group cannot control the fate of the Afghan people through war and violence, and that there is no military solution to the conflict. Noting that political and security elements are involved in achieving peace in Afghanistan, Al-Qahtani stressed on the importance of participating in political power to end the war, and added that the continuation of war will have negative consequences for the regional and neighboring countries of Afghanistan. Al-Qahtani assured Danesh that Qatar has no secret agenda for the Afghan peace talks, but it’s trying to help both sides to continue constructive talks in this sensitive situation.

Foreign Minister Mohammad Hanif Atmar also met A-Qahtani. In addition to discussing his visit agenda to Kabul, Al-Qahtani reiterated Qatar’s commitment to supporting an Afghan-led, Afghan-owned peace process. Atmar thanked Qatar for hosting and facilitating the Afghan peace process, and emphasized the need on Islamic scholars’ role in convincing the Taliban to stop violence and return to the negotiating table. 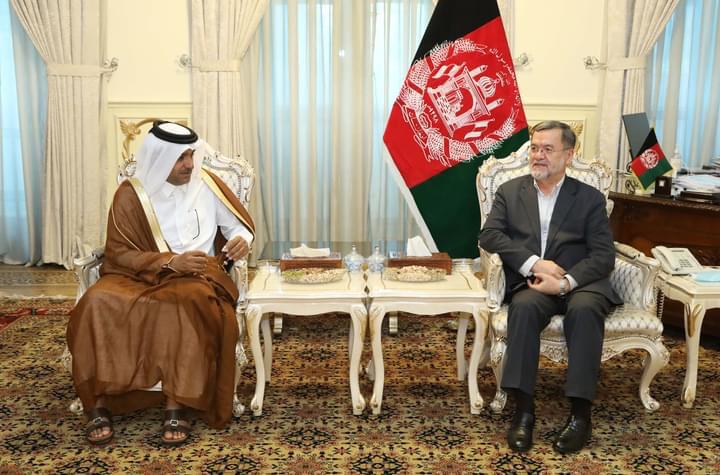 Atmar also talked about the security and political developments in the country, and added that an increase in Taliban violence and its continued ties with foreign fighters and international terrorist groups are in contrary to the commitments of the Doha peace agreement. Atmar spoke of the goodwill and commitment of the Afghan government to find a political solution and fulfill its responsibilities for the success of the peace talks, including the release of over 6,000 Taliban prisoners, despite not being a party to the Doha agreement. Al-Qahtani stressed on the importance of a halt in violence to help resume the negotiations and find a political solution for the success of the peace talks.

Meanwhile, the Intra-Afghan Dialogue Summit, hosted by the Islamic Republic of Iran and attended by the representatives of the Kabul government and the high political delegation of Taliban, was opened on Wednesday morning with a speech by Iranian Foreign Minister Mohammad Javad Zarif.

Addressing the opening ceremony, Iranian Foreign Minister Zarif highlighted the US’ failure in Afghanistan and more than two decades of its presence in the country which has resulted in major damages, and said, “Today the people and political leaders of Afghanistan must make hard decisions for the future of their country.” Pointing to the undesirable results of continued clashes in Afghanistan, Zarif said returning to the intra-Afghan negotiating table and commitment to political solutions are the best choice that can be made by Afghan leaders and political movements.

He also expressed Tehran’s preparedness to help the process of talks among the existing parties in order to settle the ongoing conflicts and crises in the country. Zarif also underlined Tehran’s commitment to help the all-out political, economic, and social development of Afghanistan following the establishment of peace. It should be noted that in this round of talks, the Afghan government’s delegation is headed by Yunus Qanuni, the former foreign minister of Afghanistan, and the Taliban delegation is led by Abbas Stanikzai, the deputy head of the group’s office.

In fact, Zarif and his Indian counterpart also met on Wednesday and stressed on the need to strengthen inter-Afghan talks that will lead to a comprehensive political partnership for Afghanistan. Indian Minister of External Affairs S Jaishankar arrived in Tehran on Wednesday afternoon to convey a message from Indian Prime Minister Narendra Modi to the Iranian President-elect Ebrahim Raisi. The two foreign ministers also stressed the need to strengthen inter-Afghan dialogue that will result in a comprehensive political partnership in Afghanistan. Referring to the talks between the Afghan government and the Taliban in Tehran on Wednesday, the Indian Foreign Minister thanked Iran for its efforts to bring the two sides closer to a comprehensive political solution.

Kabul: Spokesman for the ANDSF Ajmal Omar Shinwari announced on Wednesday that the security forces have…