Addressing a press conference at the Government Media and Information Center (GMIC), Shinwari claimed that 2,367 Taliban insurgents were killed, 1,412 others were wounded, 182 individuals including eight Islamic State–Khorasan Province (IS-K) members were arrested, and 165 improvised explosive devices (IEDs) were detected and neutralized, during these operations.

Shinwari explained that the Taliban have recently conducted five suicide and 70 IED attacks, which killed 43 civilians and wounded 170 others. Shinwari gave assurances that the situation is under control across most provinces, and the ANDSF will make good achievements soon, by conducting attacks. Shinwari added that the ANDSF have recaptured 14 districts.

On the other hand, hundreds of ulema, tribal elders, and youths rallied in support of the ANDSF, and announced their preparedness to pick up arms to protect their forces, public property, districts, and villages if necessary. Led by former provincial council head, Sayed Karim Khan Khaksar, the residents gathered at the gate of the 1st Infantry Brigade of the 203rd Thunder Army Corps. During their speeches, the participants said that the ANDSF are the guardians of the Afghan people’s honor, dignity, territorial integrity, national sovereignty, and religious values, local residents believe in ANDSF’s sincerity and firmly support them.

They added that Khost is the common home of all tribes and no one will be allowed to attack districts, villages, cities, and public facilities, and decided to retaliate any attacks aimed to destabilize the province. Provincial Governor Mohmand Katawazi, Police Chief Saifullah Sarhadi, 1st Infantry Brigade Commander Gulbuddin Alokozay, and the provincial head of the National Directorate of Security Abdul Samad Mandozai assured the participants of security. Katawazi appreciated the patriotism of participants from various ethnic groups, and added that the tribes are vigilant in supporting their people and territory, and stand by the ANDSF.

“The intensity of the war is understandable; this is not the first time that we, the people of Afghanistan, are going through a difficult military phase. We are now at a critical and crucial military stage,” said Bismillah Mohammadi, acting Minister of National Defense.

Meanwhile, local officials in Paktia province reported that head of PD5 police station of Gardez city, Wali Khan Hemmat, was killed during clashes with the Taliban on Tuesday night. Provincial Police Spokesman Hayatullah Nizami told Etilaatroz daily that the Taliban carried out an attack against a security outpost in Mehlan area of the PD last night, and the ANDSF killed five Taliban insurgents in response. The Taliban have yet to comment on the report.

Also, local officials in Ghazni province told Etilaatroz daily that Taliban fighters have attacked parts of Nawur district of the province. Tahir Zahedi, Nawur district governor, said that the Taliban had launched their attack from the Sheghna pass, first on the Diwal area and then on the Hesarak area of the district. Zahedi added that security forces had retreated from the Diwal area. Clashes are currently taking place in the Hesarak area near the district center between the two sides. According to Zahedi, at least three Taliban fighters were killed and many others were wounded in the clashes. Also, Taliban fighters attacked the Qushanak area in the west of Nawor district three days ago from Ajristan district.

Meanwhile, a gathering of religious scholars was held at the Loya Jirga Hall today, attended by Kabul’s provincial officials, in support of the resolution recently announced by the Afghan and Pakistani ulema about war and peace in Afghanistan. Provincial Hajj and Religious Affairs Director Sayed Mohammad Sherzadi stressed the need for holding such gatherings and said that when the ulema and Islamic world thinkers called the current war as unjustifiable and illegitimate, there is no other excuse to continue the current war.

Sherzadi added that the gathering was held to call for peace and the participants are the architects of peace. Provincial Governor Mohammad Yaqoob Haidari said that ulema have active role in all areas of society, in addition to serving mosques and in the field of guidance. Haidari added that ulema have had an important role in the fight against COVID-19 and the country’s ulema along with ulema from Islamic countries described the current war as illegitimate and called for its cessation, and that the people expect that a suitable solution will be created to end the war and achieve peace, which will lead to the establishment of peace and stability in Afghanistan. Head of Kabul Ulema Council Abdul Qader Qanet said that the ongoing war is illegitimate and fratricidal, and called on the Taliban to accept peace that the people and ulema want. Ulema declared the current war as illegitimate and called for nationwide peace.

In fact, even US Chargé d’Affaires Ross Wilson said that the Taliban offensive is bringing hardship to communities across Afghanistan already grappling with drought, poverty and COVID. “It violates Afghans’ human rights and provokes fear that a system this country’s citizens do not support will be imposed. We call on the Taliban to negotiate in good faith and with a genuine will to bring about a political settlement and a permanent end to fighting,” Wilson tweeted on Wednesday. 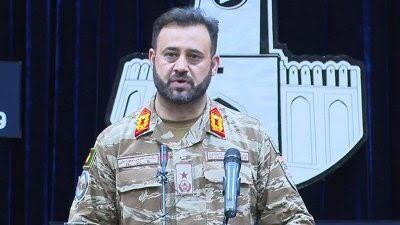 Emphasizing on careful planning and speed of action, Khan asked provincial military officials to enter the implementation phase of codified security plan without wasting time. In addition to providing information about the security situation of Herat province, the military council emphasized on the coordination between the people and ANDSF, and assured that the security situation will change with the measures taken.

Also, officials at Herat’s provincial office of the National Statistic and Information Authority (NSIA) reported that registration for electronic identity cards (e-IDs) has been suspended over the past three days, due to the fiber optic cable being cut off in the province, and urged citizens not to visit the e-ID sites until the internet is restored. Provincial NSIA Head Mohammad Qasim Salehi told Hashte Subh daily that six e-ID sites are operating in the province, each of which registers and processes the documents of between 300-700 individuals on a daily basis.

Salehi added that 285,000 individuals have so far received e-IDs in the province, and the number of e-ID sites will soon increase to nine, after the purchase of registration machine. Salehi said that the disconnection of electricity and internet is one of the main obstacles in their way, and hoped that the relevant agencies will soon resolve these problems.

On the other hand, Fionnuala Ní Aoláin, Special Rapporteur on the promotion and protection of human rights and fundamental freedoms while countering terrorism, in a statement said that the violence in Afghanistan has reached new heights of egregious human rights violations, demonstrating the escalating and devastating tactics of directly targeting civilian populations by terrorist groups. She called for the international community to consider with the Government of the Islamic Republic of Afghanistan and its people how collective efforts towards prevention, redress and accountability for such grave violations of human rights, which may amount to war crimes and crimes against humanity, can reach victims and survivors and make a difference in their lives.

“We commend the work of the Government of the Islamic Republic of Afghanistan for undertaking these open discussions on the Government’s responsibility and efforts to protect citizens and human rights defenders from such violence and unveil the complete truth about the events surrounding gross human rights violations, their circumstances, their perpetrators, and their causes,” the statement read. The statement particularly welcomed the launch of a protection mechanism by Presidential decree in December of last year and urged the Government to continue working with the Independent Human Rights Commission and civil society to ensure this mechanism can serve its purpose and serve the rights of victims of human rights violations and terrorism as central to its aims. It further called for enhanced engagement with the Independent Human Rights Commission and consideration of mechanisms that may advance accountability, justice and ultimately prevention and attention to existing communications.