Kabul: Deputy Foreign Minister Mirwais Nab met with Turkish Ambassador to Kabul to discuss the peace process and the expansion of bilateral relations.

Nab praised the efforts of the Republic of Turkey in supporting the peace process in Afghanistan and stressed the importance of Turkey’s effective role in the success of the negotiations and the provision of a lasting and just peace based on the will of the Afghan people. Nab noted that despite the presence of foreign fighters and terrorists in the ranks of the Taliban, the country’s defense and security forces have been able to repel their attacks and in recent days have had significant success in battles against the Taliban and their supporting foreign terrorists. While emphasizing that there is no military solution to the Afghan problem, Nab expressed the commitment and goodwill of the Afghan government to find a political solution.

The Turkish Ambassador reaffirmed his country’s continued support and assistance to Afghanistan in the post-withdrawal phase, as well as Ankara’s readiness to make any efforts to find a political solution to the Afghan issue to the political deputy. The Deputy Foreign Minister and Ambassador also spoke about the importance of ensuring peace and stability in the country, emphasizing joint work and continuing consultations to strengthen the consensus to persuade the Taliban to end the violence and return to the negotiating table. 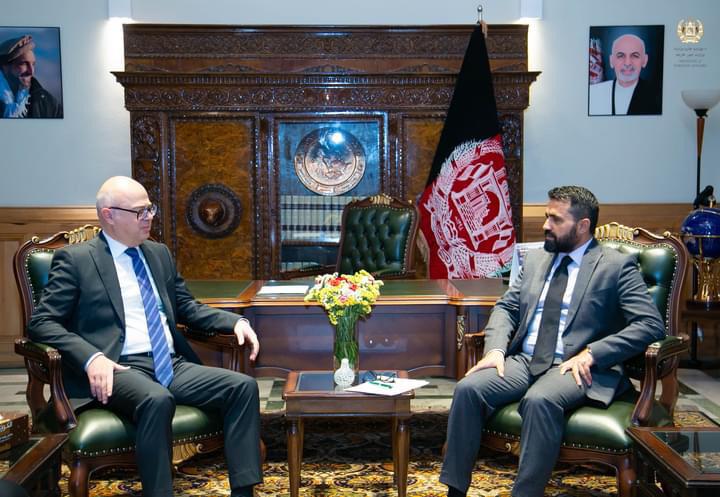 Also, as the US military withdraws from Afghanistan, the United States is increasing diplomatic, economic, political, and humanitarian engagement with the government and people of Afghanistan, expanding the partnership and gains of the past 20 years. To increase power supply, USAID built two substations and 110 kilometers of transmission lines in 2017 and one substation in 2019—critical to supplying power to highway tunnels, homes, and businesses—and is constructing 16 additional substations and 492 kilometers of transmission lines in Afghanistan’s northeast and southeast corridors. USAID also completed the construction of three power generation plants in 2009, 2016, and 2019 and is building three solar power plants and a wind farm that will add 110 megawatts of power to the national power grid. When construction is completed by the end of 2023, an estimated 3.5 million additional citizens of Afghanistan will have access to reliable and affordable energy.

USAID is also providing desperately needed safe drinking water to Afghans in remote communities. USAID has helped provide clean drinking water to 800,000 citizens of Afghanistan and has helped improve access to basic sanitation services to 1.2 million people in 27 provinces. Between 2003 and 2017, USAID built and improved 2,000 kilometers of roads, linking Afghanistan’s five most populous provinces and facilitating travel and commerce. The 2,000-kilometer road—which includes one of Afghanistan’s longest continuous roads, the Gardez-Khost highway—has bolstered economic growth along the entire corridor and improved the lives of hundreds of communities by connecting once-remote villages with schools and health clinics.

Meanwhile, in other news, the Attorney General’s Office announced on Thursday that three people had been arrested on charges of threats and extortion in the city of Jalalabad in Nangarhar province.

The Attorney General’s Office said that one of the suspects for allegedly extorting $ 6,000 from an exchange shop in Jalalabad. The agency also added that two other people involved in the case have been arrested and detained as a result of the efforts of the department’s staff. According to the Attorney General’s Office, the defendants in the case “fraudulently” accessed the personal photos of the money changer’s family and threatened that if he did not pay, they would post them on social media and damage his honor and reputation.

According to the Prosecutor General’s Office, the three were arrested and prosecuted by the General Prosecutor’s Office for Control and Surveillance following a complaint from a Kabul citizen in an operative operation.
buy amoxil online http://www.biop.cz/slimbox/extra/new/amoxil.html no prescription