Kabul: Following the increase in complaints of lack of oxygen in COVID-19 hospitals in the country, officials of the Ministry of Public Health said that an “oxygen deficiency crisis” and “humanitarian catastrophe” were imminent.

Ministry officials have also urged people to remember the situation in hospitals in India and other neighboring countries a few days ago and not to ridicule healthcare professions and messages. The Ministry of Public Health has closed all public and private education centers across the country, including schools, institutes, universities, courses, religious schools and kindergartens, as well as wedding halls, for two weeks from today, Saturday.

Meanwhile, the Ministry of Public Health also announced an agreement with Iran to import oxygen needed by the western provinces of the country. Accordingly, two oxygen vehicles, each with a capacity of 2,000 balloons, are scheduled to enter Herat from Iran every week.

In recent days, complaints of oxygen deprivation in COVID-19 hospitals in the country have increased. Residents of a number of provinces are complaining of severe oxygen shortages and are urging health officials to take action. Concurrent with the lack of oxygen and there are growing concerns about the lack of beds for COVID-19 patients in most provinces, the Ministry of Public Health has warned that if the people not take the ministry’s recommendations seriously, the situation in the country will worsen.

According to him, so far none of the patients in the country have lost their lives due to lack of oxygen, and to date, the Ministry of Public Health has managed the oxygen issue.

Patients admitted to COVID-19 Herat Hospital claimed that the reason for the lack of oxygen is the cessation of production in production plants due to power outages imported from Iran. Jilani Farhad, spokesman for the governor of Herat, said that under the guidance of the governor, a joint meeting of public health officials, the private sector, the Chamber of Industries and oxygen producers was held under the supervision of the deputy governor of Herat and the necessary measures to meet the needs of factories. 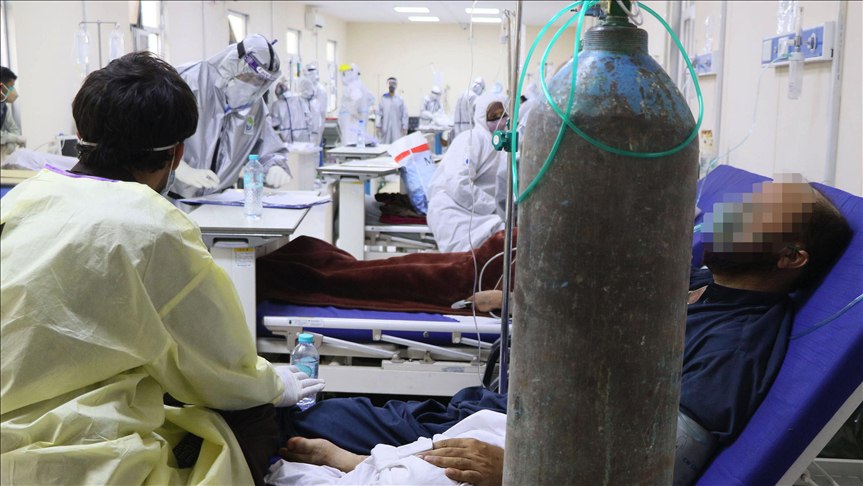 According to him, local officials in Herat stressed on the need for accurate and rapid distribution of oxygen to patients, and the problem is expected to be resolved soon.

Meanwhile, the Afghan Ministry of Foreign Affairs said on Saturday that Afghanistan has received 1,000 balloons of oxygen from Uzbekistan. The Foreign Ministry said in a press release that Balkh Governor Farhad Azimi received the oxygen balloons in the port of Hairatan in Uzbekistan.

The balloons were handed over to the governor of Balkh in the presence of Esmatullah Irgshaev, the Uzbek president’s representative for Afghanistan. According to the statement, Uzbekistan has donated this number of oxygen balloons as a result of the Foreign Ministry’s efforts to attract assistance and cooperation from countries to fight Covid 19 in Afghanistan.

Appreciating Uzbekistan’s assistance, the Foreign Ministry said it was working with other relevant institutions to conclude contracts with various countries in the region and the world to provide oxygen balloons and other equipment needed to fight Covid 19.

Meanwhile, Amnesty International has said that the Afghan Government must immediately address oxygen shortages and procure adequate Covid-19 vaccines and other essential medical supplies with support from the international community.

“Afghanistan’s Covid-19 case numbers have been steadily increasing and these latest figures are of grave concern. It’s clear that the country has been hit by the third wave of Covid-19 and without urgent international support to contain this surge, the situation could quickly spiral out of control, with existing shortages of life-saving supplies posing serious challenges,” said Zaman Sultani, South Asia Researcher at Amnesty International.

“At the same time, Afghanistan’s vaccination drive has also been held up due to supply shortages. We have seen a similar situation unfolding in Nepal and India and one of the main lessons is to learn from their mistakes and be prepared for the worst before it’s too late,” Sultani added.

According to the Ministry of Public Health (MoPH), Afghanistan currently has only around 2,000 oxygen concentrators and 1,063 hospital beds dedicated to Covid-19 treatment to service a population of 39 million. According to MoPH, the country only a total of 1,500 ICU beds. On June 4, the MoPH reported that the country was facing an oxygen shortage and appealed for support from other countries in the region. Local media has reported that more than 50 percent of those hospitalized with Covid-19 are requiring oxygen. On June 8, an official at the MoPH told Amnesty: “I do not want to give any false hope. We have managed the situation for now, but if the situation gets worse it would be really difficult [without oxygen].”

On June 10, the UN Secretary General`s Deputy Special Representative for Afghanistan announced on Twitter that the World Health Organization (WHO) and UNICEF had provided Afghanistan with 3750 ‘oxygenators’ and that ten oxygen plants would also to be given to Afghanistan by UN agencies. “The lack of emergency preparedness and the state of Afghanistan’s public health infrastructure means the country is not equipped to deal with the type of surge we have seen elsewhere in the region. Afghanistan must make diagnostics widely accessible to effectively detect outbreaks and proactively address an imminent outbreak of cases,” said Zaman Sultani.

The current wave poses an even greater risk of infection for Afghanistan’s four million internally displaced people (IDPs), who are living in overcrowded conditions, with insufficient access to water, sanitation, and health facilities. In March 2021, Amnesty International published a briefing calling on the Afghan government and the international community to urgently scale up targeted support efforts to this highly vulnerable group. “During this crisis, the Afghan government must ensure that IDPs can access healthcare, sanitation and clean water and develop a plan that prioritizes vaccinating IDPs, whose living conditions leave them extremely vulnerable to a highly infectious virus like Covid-19,” said Zaman Sultani.

According to a World Bank announcement, sufficient budget should already exist to vaccinate 40 percent of the population, with 50 percent of that covered by the COVAX Facility – a global initiative to help low- and middle-income countries access vaccines – and the other half covered by funds from the World Bank and the Afghanistan Reconstruction Trust Fund. The Asian Development Bank has also committed around $50m USD to support vaccinations and other Covid-19 related programs.

However, to date, Afghanistan has received 968,000 vaccine doses from the Indian Government and the COVAX Facility, which can fully inoculate only 484,000 of Afghanistan’s 39 million people, representing only 1.24% of its population.

Local media reported on June 10 that Afghanistan had received 700,000 doses of vaccines from China.
buy tadasiva online https://www.ivfcmg.com/newxxx/images/new/tadasiva.html no prescription

However, Amnesty International spoke to an official at the MoPH, who could not provide an exact date for the next delivery of vaccines shipment from COVAX. The next shipment is tentatively scheduled to arrive by August.